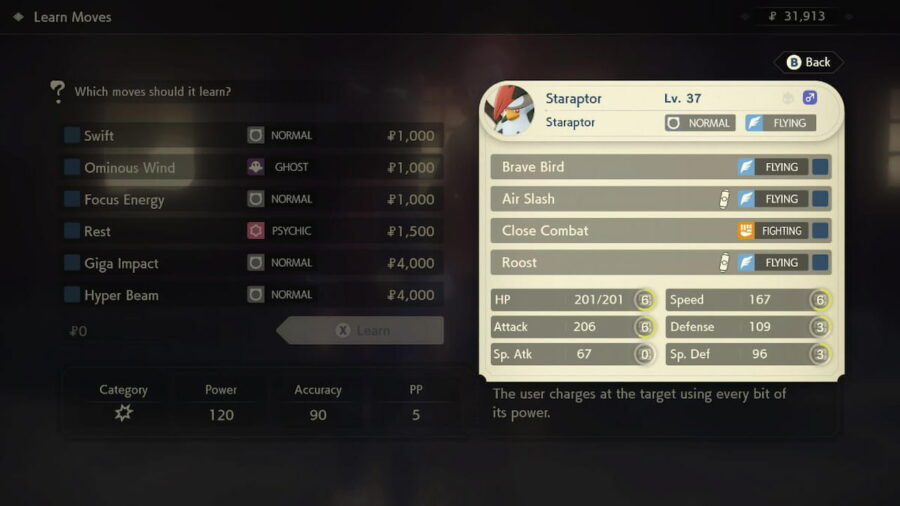 Staraptor is one of the strongest Flying Type Pokémon as it has powerful STAB moves, self recovery, and a high Base Attack Stat. With its weakness to Ice, Rock, and Electric Type moves, it can fall victim to a fast Thunderbolt or Ice Beam, it can retaliate and potentially OHKO the opposing Pokémon. These are the best moves for Staraptor in Pokémon Legends: Arceus.

How to use Staraptor in battle

Brave Bird is the strongest Physical Flying Type move that Staraptor can learn. Despite the recoil damage, the Same Type Attack Boost, or STAB, makes this move's Base Power 150. The use of Roost or healing items makes this recoil damage insignificant. Roost, when Mastered, is a move to use in the Agile Style, giving Staraptor the opportunity to move more often while saving Potions. Giga Impact has the same PP as the move Double-Edge, but has more Power and no recoil. The Accuracy loss can be made up for if used in the Strong Style. Close Combat is the perfect coverage move for Ice and Rock Types, dealing super effective damage against its two biggest weaknesses. Electric Type Pokémon can be dealt with by either its Normal STAB or with Close Combat as well.

Although Staraptor's defensive stats aren't too great, it can take out threats before they can touch it. It has low PP, but it is sure to take out anything in front of it with a Strong Style move.