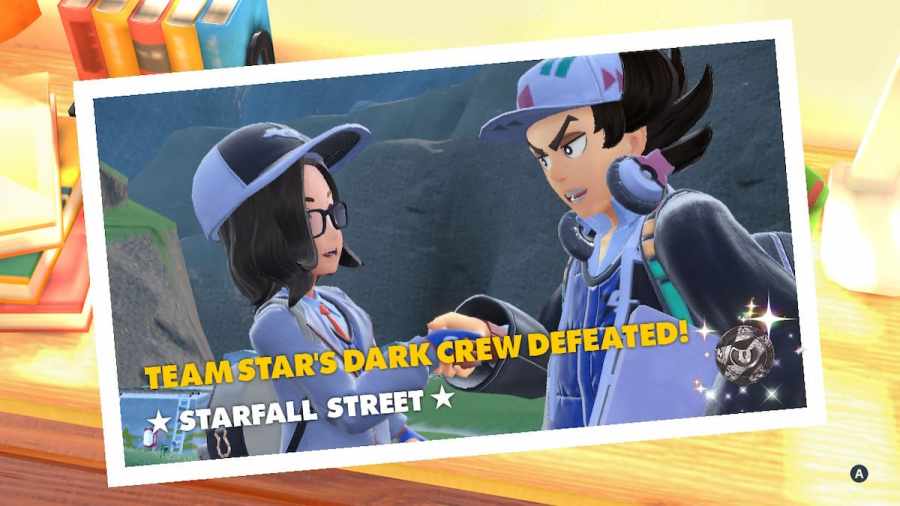 Pokémon Scarlet and Violet's first recommended stop while going through the Starfall Street storyline is the Dark Crew. Players should have their Pokémon leveled up to at least 21 as there is a lot of battling involved when getting to each base. Dark is weak to Fighting, Fairy, and Bug, so there are many options for what to bring to the fight. This is everything players need to know about how to defeat the Team Star Dark Crew in Pokémon Scarlet and Violet.

When first getting to the Dark Crew's location in Pokémon Scarlet and Violet, players will have to battle one of the Grunts immediately. Ideally, players will have beaten the Steel Titan before this point, as this will be a little harder than that fight. The cutscene for the Dark Crew will start when players are close enough to the gate in Area One of the West Province. The first trainer will bring out a level 19 Murkrow. It is a Dark/Flying Type, making it weak to Ice, Rock, Electric, and Fairy moves.

Once the trainer is defeated, players will have to use the Auto Battle system with their first three Pokémon in their party to defeat a total of 30 of Team Star's Pokémon while running around. They all send out Dark Type Pokémon and some will have dual Typing, making the usual method of using Fighting, Fairy, and Bug Pokémon not deal super effective damage. If players reach low HP with their Pokémon, they can run to a Vending Machine to restore their HP. Players are given 10 minutes to defeat 30 Pokémon; these are all the Pokémon that can show up:

After the wave of 30 Pokémon, players will fight Giacomo, the boss of the Dark Crew in Pokémon Scarlet and Violet. He has a level 21 Pawniard and will use his 20 Revavroom against the player once Pawniard is defeated. The Revavroom acts as a pure Dark Type and can deal a lot of damage if players aren't careful. Both Dark and Ghost Types will resist its Dark moves if players are looking for defensive options. As long as they bring in Pokémon that can hit it super effectively, it should be no issue.

For more information on the next recommended Team Star fight, check out How to beat Fire Team Star Mela in Pokémon Scarlet & Violet on Pro Game Guides.