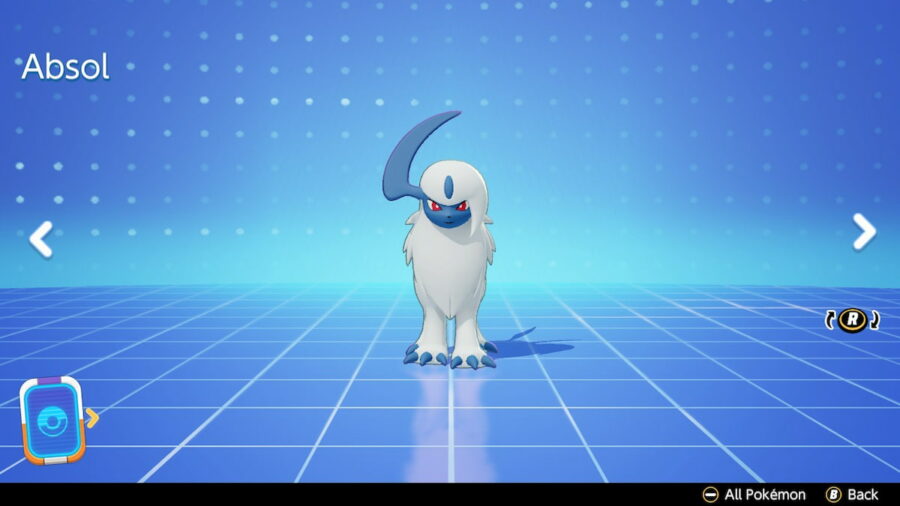 Absol is a very strong Speedster in Pokemon Unite and does the best when engaged in duels with one other Pokemon. They are best suited for fighting in the Middle Lane or Jungle as many players call it, and deal Attack damage. Absol can struggle against Ranged Attackers as a close ranged Attacker but has ways of quickly closing the gap for quick knockouts. This is how to play Absol in Pokemon Unite.

Absol is one of the duelists in Pokemon Unite and can go toe to toe with nearly any Pokemon in a one-on-one situation. They have the Super Luck Ability, raising their Critical Hit Chance by 15% on their Basic Attacks, Moves, and Unite Move. The Pokemon's Boosted Attacks, or third Basic Attack, will lower the target's Defense by 15% for two seconds as well. This makes Absol very dangerous to deal with and good at sniping or picking up KOs on already low HP Pokemon. When playing as Absol, players should take out retreating enemies or focus on less tanky Pokemon in team fights for the best results.

At level one, Absol can learn either Feint or Slash. Feint will increase Absol's Attack Speed but is weaker than Slash, while Slash is stronger and increases Absol's Critical Hit Rate by 15% after use. These moves will quickly be replaced if the player is jungling or fighting the Pokemon in the Mid Lane. The total experience the player gains will push them to level five. Absol will have to wait longer when fighting in the top or bottom lanes. Feint will ignore a Pokemon's Defense, while Slash will provide a good buff when fighting enemy Pokemon.

At level five, Absol will replace Feint with either Night Slash or Pursuit. Both moves have a cooldown of four seconds but act very differently. Night Slash is a dual attack that you can use a second time after the first hit. The second hit must be used within six seconds and will have a 30% increased Critical Hit Rate when used on a Pokemon with less than 50% HP. The attack will increase Absol's Attack Speed as well. Pursuit is a single attack that will have its cooldown reduced when attacking the enemy from behind. It deals more damage overall but is harder to pull off than Night Slash.

At level seven, Absol will replace Slash with either Psycho Cut or Sucker Punch, each with a cooldown of roughly five seconds. Psycho Cut is a projectile that can hit multiple enemies, slow them down for two seconds, and create three marks on them. The next two hits will deal double damage to the target with a mark, with the third hit dealing triple the damage. Psycho Cut and the three following attacks on the marked Pokemon will have a 15% increased Critical Hit Rate. Sucker Punch will put Absol in a counter state and either go off on its own or have Absol counter the next hit towards it before the counter expires. This negates all damage on Absol from any hit that comes towards it when activating Sucker Punch.

At level nine Absol will learn its Unite Move, Midnight Slash, dealing damage in a small area. Absol can't be targeted when using this move, and it will deal a total of nine hits with the last three coming out as projectiles in different directions. The move has a cooldown of about 134 seconds but can be charged by doing damage like all other Unite Moves.

Many Held Items work well for Absol, but players should make sure not to waste the Pokemon's biggest strength. Absol can become even stronger at what it naturally does by focusing on Critical Hit and Critical Damage increasing items. Its Battle Items are best used to either increase its already large Attack or help to escape a fight.

Absol has two builds that really make them shine, but its moves are relatively interchangeable because you will mostly use it to pick up KOs and get revenge. Players can focus either entirely on damage or increase Absol's survivability to stay in the fight longer.

Players should use Psycho Cut first, no matter what build they go for. This increases all attacks on the enemies it marks and can be used with Night Slash for a lot of burst damage because it can be used twice in a row. Having Scope Lens, Razor Claw, and either Muscle Band, Leftovers, Focus Band, or Energy Amplifier will keep its damage high while also having enough things to keep it alive. X Attack or X Speed is recommended for this build.

The synergy between Pursuit and Sucker Punch shouldn't be underestimated. Players that struggle with getting a backstab off with Pursuit can do so even easier with Sucker Punch. Starting an encounter by getting into the counter stance with Sucker Punch will have players leap behind their target. As soon as Sucker Punch goes off, players can use Pursuit to do a lot of burst damage to their opponent. Scope Lens, Razor Claw, and Focus Band are recommended for this build, along with either X Speed or Eject Button, to escape any fights players may have trouble with.