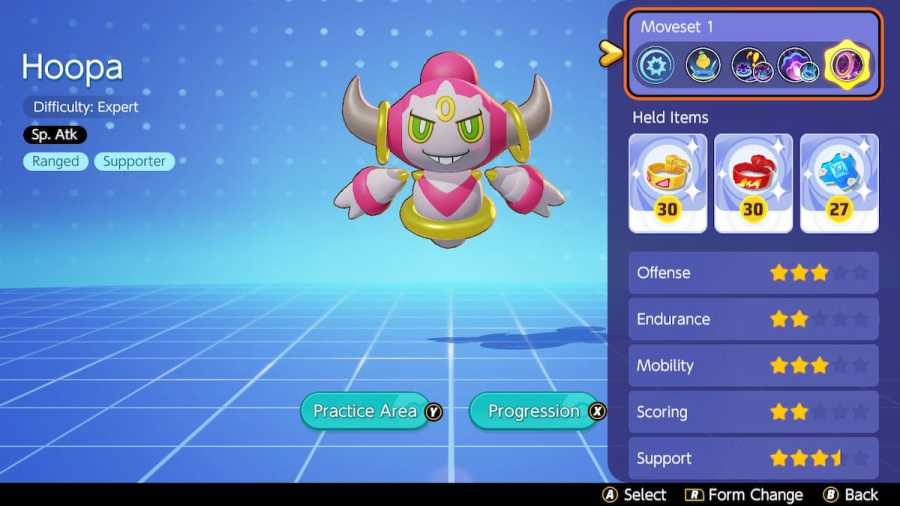 Hoopa is a very strong Support Pokémon in Pokémon Unite. It's incredibly tanky, versatile, and can deliver a good amount of damage. Hoopa is difficult to master and a good Hoopa player can completely change the tide of any Pokémon Unite match. These are the best Hoopa builds in Pokémon Unite.

With the Magician Ability, Hoopa has a large amount of survivability while hindering the enemy team. Magician passively steals Berries for Hoopa, provided there is one available, or energy if there are no Berries left. Additionally, Hoopa's Movement Speed increase moves and the ability to teleport teammates allows it to put pressure in either lane.

At level four, players choose between Hyperspace Hole and Trick. Trick is relatively straightforward, increasing the Movement Speed of Hoopa and an Ally while buffing Hoopa's Basic Attack and Shadow Ball. Hyperspace Hole is a bit more complicated, creating either a portal back to the Base or linking the team's Goals with portals to allow instant passage between them.

At level six, players choose between Phantom Force and Shadow Ball. Phantom Force creates a portal that Hoopa can attack from to deal damage to an enemy near it. If activated twice within five seconds, Hoopa can warp to the portal, along with an Ally that is linked with Trick. Enemies that are damaged will have their Movement Speed decreased and the Ally that is warped will have their HP restored by 30 percent. Shadow Ball is a ranged attack that decreased enemy Movement Speed, Special Defense, and can attack twice in a row if Trick is used.

Hoopa's Unite move is Rings Unbound and transforms Hoopa into its Unbound form. Its moves are then replaced by Hyperspace Fury and Psybeam. Hyperspace Fury is an area of effect melee attack that will stun enemies for one second. Psybeam is a ranged attack that causes Hoopa to become Unstoppable while using it. Hoopa's Basic Attacks can hit up to two Pokémon while transformed and Hoopa gains 40 percent more HP while creating a portal that Allies can warp to.

The synergy between Trick and Shadow Ball makes Hoopa a powerful offensive threat while being able to Shield Ally Pokémon. Trick's secondary damage from Shadow Ball will result in a stun when hitting the same target, but even a Basic Attack following a Shadow Ball will result in a stun. At Level 10, Trick begins to heal both Hoopa and the Ally Pokémon that Hoopa is linked to based on 40 percent of the damage they deal within three seconds of using it.

Hyperspace Hole increases Hoopa's Movement Speed, making them very good at picking up knockouts from escaping enemy Pokémon. This also helps them Score quickly after a knockout before the enemy respawns. Hyperspace Hole is extremely versatile as it allows Ally Pokémon to help each other out whenever one lane is being overrun, or even take Ally Pokémon back to Base to recover HP. Phantom Force will reduce the Movement Speed of enemy Pokémon. It's very useful in team fights as it can hit multiple enemies.