Pokemon Sword and Shield are the upcoming Nintendo Switch full-fledged versions of the Pokemon game. We're taking a look at some of the Sword and Shield leaks that have come out ahead of time! There's leaks for the Pokedex, evolutions, how many Pokemon there are going to be initially, and a lot more!

The game is now live and we have a bunch of content for you to check out:

A huge batch of leaks has now been posted all over the net. I've sourced a lot from the Sword & Shield Leaks Subreddit. The first thing we're going to look at is a chart of images that display a lot of the evolution images of a majority of the new Pokemon coming to the game (click to enlarge): 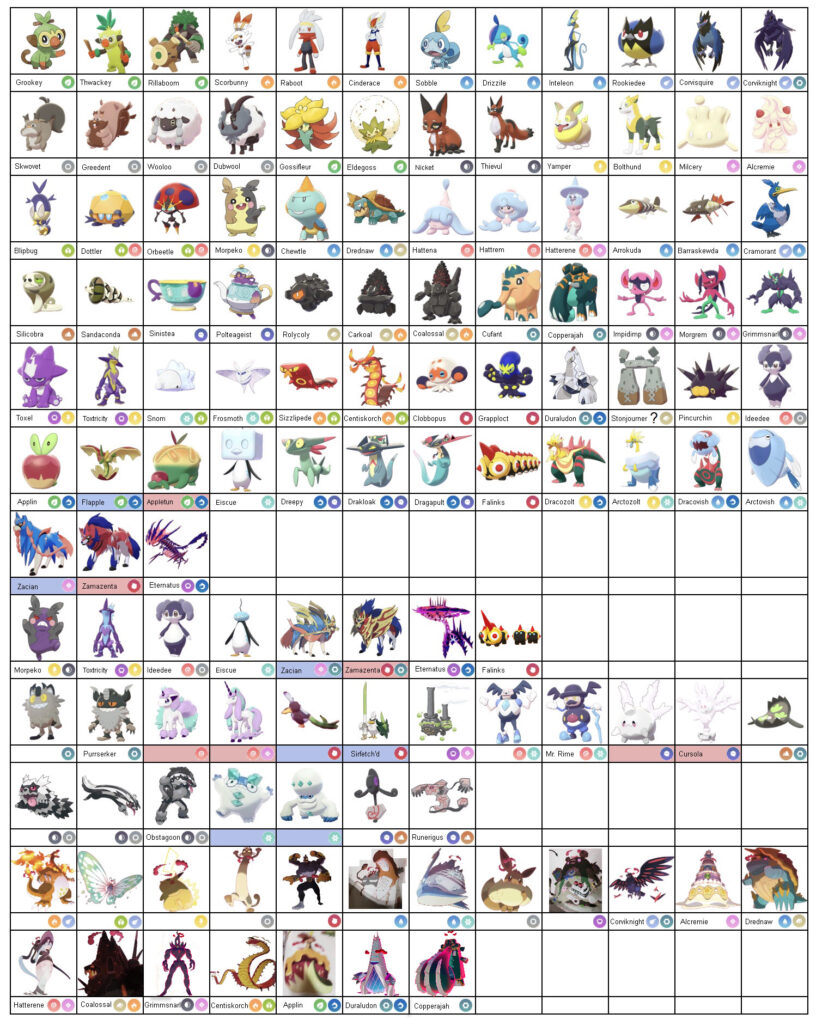 The second one appears to be the full list of Pokemon that will be making an appearance in the game. If you were unaware, there was quite a bit of controversy about these games because the full National Dex won't be available in the game. We have been unaware of which Pokemon will make the list, and this seems to display a lot of what has made the cut so far. We aren't positive that this is the entire list or not.

Some of the big ones you'll be surprised didn't make the cut are Bulbasaur and Squirtle lines. They are the original three starters from the first games, so it's quite a shock not to see them added to the list. If you're a fan of Charmander though, you're in luck because that trio is in the game!

If the new Pokemon appear in the National Dex and are in the same order as the Galar Dex they will show up as the following numbers:

Here's a datamined list of the moves that will NOT be appearing in either game. Again, the game hasn't been fully released so it is possible that there's some incorrect information or that things will change prior to release.

Not happy with the Nature of your Pokemon? Well, you'll now be able to buy Mints that will allow you to pick the nature of it! These will be purchased using Battle Points, and it has been rumored that the Pokemon will not need to be level 100 to do it. 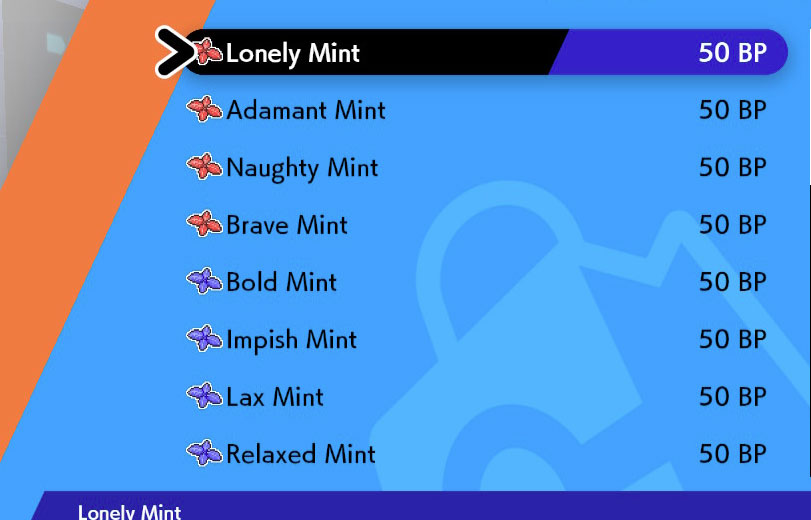 Here's a look at the Fossil Pokemon you'll be able to collect in the game. You will apparently be able to combine the fossils together to create a single Pokemon. Here's the information directly from the game:

Fossils in Galar are broken into top halves and bottom halves for some reason, huh.

Strangely, no matter which top and bottom you combine, they can be restored together.

Here's a look at the options screen if that's interesting to you: 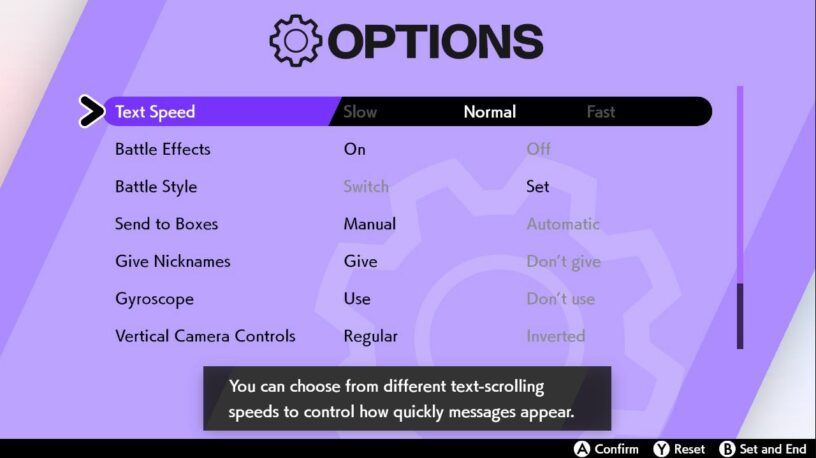 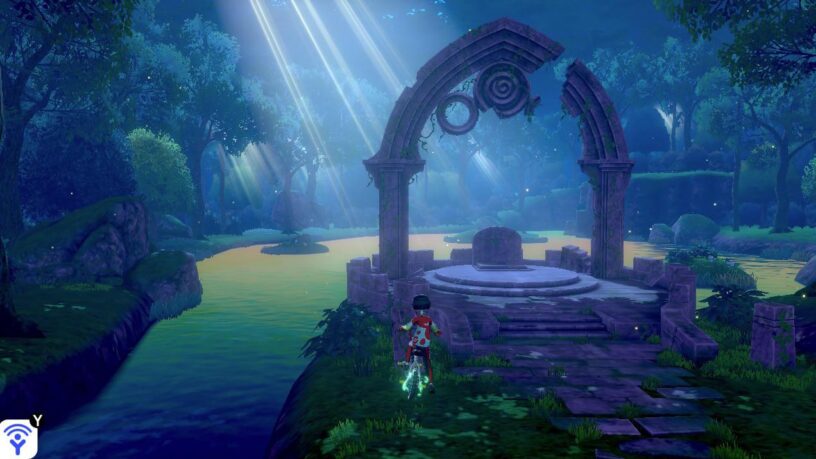 This is a leaked screenshot of the Slumbering Weald area that we will be able to explore in the game. It is supposedly a forest area next to the starting town that will have some new Pokemon to collect!

There's eight leaders reportedly in total, here's a list of their names and what Pokemon type they use:

This was one of the major early leaks for the games that turned out to be true.

Your rival is named Hop, but you will also be facing of against Bede and Marnie

Team Yell is the gang in this game, who are well meaning fans of Marnie causing trouble

To become part of the gym challenge, you will have to get an endorsement. Bede gets an endorsement from Chairman Rose and his secretary Oleana

Eternatus is the evil legendary. The other legendary will be a wolf, who will either have a shield mane or hold a sword like Great Wolf Sif. Don't recall its name

Dynamaxing and Gigantamaxing are new dynamics that will supersize pokemon in specific areas. Gigantamaxing is different from dynamax as it changes what the pokemon looks like. Meowth looks like long cat. Lapras gets layers like musical bars to its shell and musical notes. Pikachu looks like retro fat pikachu

Sonia is Leon's former rival who is researching the dynamax phenomenon at the behest of her grandmother and professor of the game.

Skwovet and Greedunt iirc are chipmunk pokemon who will hide in berry trees and attack randomly if you shake for too many berries. If they attack, you lose half the berries that dropped.

The fourth gym is the first Fairy type gym, led by an actress named Opal. Milo, Nessa, and Kabu are the first ones.

Before fighting the gym leaders, you have to complete the gym challenges. - Milo has you herding sheep pokemon named Wooloo, but Pamper, electric corgi pokemon, will startle them and send them rolling elsewhere. - Nessa has you running through a maze where water blocks the way - Kabu requires you to catch pokemon and get 5 points, but you have to be in a party battle with another trainer who's also trying to catch it

While there is a transit system, you will have to go through the Wild Area at times, an open world biome that has a weather system and little pockets where wild pokemon dynamax and have to be beaten in a for person raid. You will randomly see nearby players and interact with them to get their league cards and items

Camping is how you play with pokemon now. You'll get two toys, a feather toy and toy pokeball, which can raise friendship. You can make curry which will raise starts and friendliness

Pokémon will not walk beside you in the overworld map

Scorbunny will have fighting moves, but is pure fighter. It becomes Raboot, but I don't remember the final evolution, except that it looks like a fighter. It looks humanoid

Sobble becomes Sizzile and then Intelleon, a chameleon with a spy theme

Grookey will end up as a giant gorilla that beats a wood drum to attack.

There's a lot I'm missing, but I wasn't planning on leaking until now. I'm angry and upset, and while I liked what I saw, I didn't get too far.

The best Pokémon so far is the blue seagull who when it dives, either gets a barracuda in its mouth or a pikachu, which it launches at its enemy