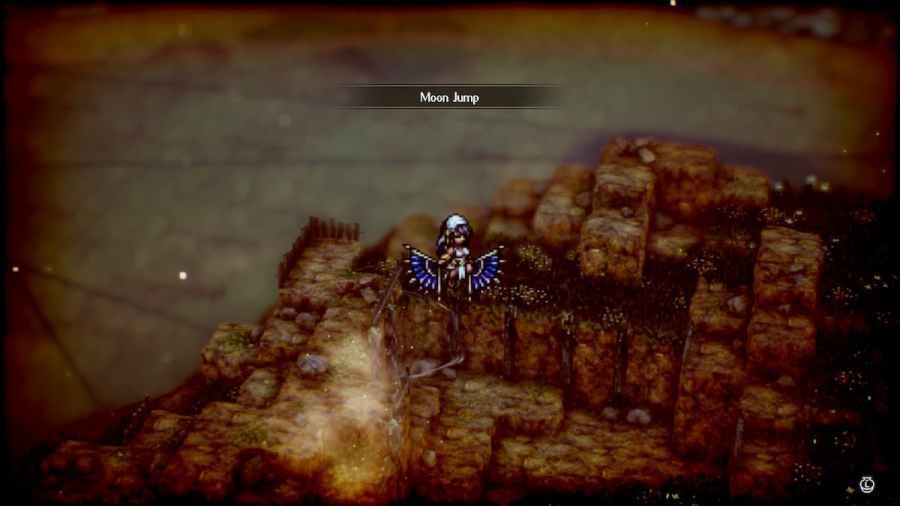 Milo Yuelle will join your ranks for good after a few chapters of non-commital aid in Triangle Strategy—that is, if you choose to path with Roland and Frederica and go back to Wolffort in chapter 15. Her loyalties never seem certain, but soon enough it is clear that she likes Serenoa best.

Here's how to use Milo, the spy from Hyzante.

Milo has a bewitching flair for dancing. Use her fan to inflict serious physical damage while poisoning the target. She will be extremely useful when you double her movement range with the ability she comes with—Moon Jump. Not only will Milo be able to jump across significant distances, even gaps, but she will also be able to use an additional command upon landing.

For instance, you can jump and perform Milo's powerfully poisoning Green Mist attack at the beginning of a battle, then move her back to safety. Alternatively, have Milo cross entire stages in some instances. Along the way, she can lower enemies' attack and defense for three turns while stealing one TP with her Blue Night ability.

Related: How to use Groma Jurgina – Triangle Strategy Unit Guide

Increase the effectiveness and duration of Blue Night and Green Mist once you unlock Milo's second weapon rank. You can also upgrade her evasion and speed stats as she learns the Heart Stealer ability at Veteran status and gains a chance at tempting foes for two turns if used in battle. Tempted foes will attack each other and even invite their own allies' attacks.

Once you unlock her third weapon rank, Phoenix Fan, you'll be able to buy the ability Power of Love. This will tempt all foes within range for one turn and could be especially helpful when you're surrounded by a mass of enemies. On top of that, Milo's advanced Stardust has a chance of paralyzing all nearby opponents.

Milo Yuelle can pull off impressive feats of movement. Her beguiling abilities can turn the tide of battle, and her Moon Jump and Green Mist are extremely useful when she first appears to fight with you. Her loyalty may seem to waver in the beginning, but once Serenoa and company accept her, you'll have gained a valuable attacker.

How to use Milo Yuelle – Triangle Strategy Unit Guide