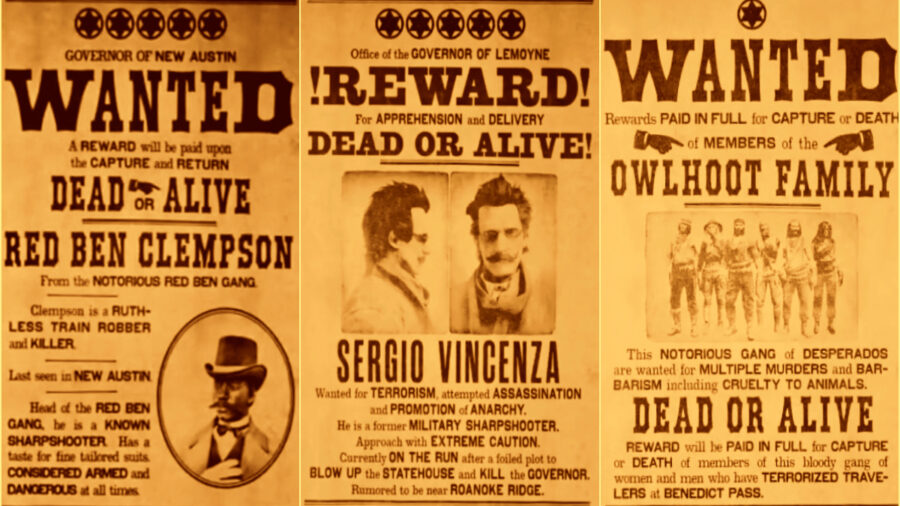 These Legendary Bounties are 10 of the meanest criminals in the West. Wanted dead or alive; round 'em up, and bring them in alive, for a heftier reward.

Wanted for embezzlement and murder, players can find Philip Carlier by a campfire on the Eastside of the Lagras Swamp. Sneak through the swamp and quietly pick off guards until finding the bounty. He will run, but he's not very fast and can be easily captured. Load him up on the horse, and head South to the Saint Denis Sheriff's office to claim the reward.

A possible cannibal, wanted for a string of murders, on the far West of Ambarino, by Lake Isabella; players will be given three locations to search for The Wolfman. There will be a good amount of wolves in the area, so shoot them quickly if they attack. Players can find The Wolfman's hidden camp on the Northwest corner of Lake Isabella. While approaching, The Wolfman will shout for a bear. When it appears, kill it before trying to capture the bounty. It is likely the bear will kill try and kill the target before being able to apprehend him. After capturing The Wolfman, head Northeast to find a jail wagon in Spider Gorge and drop off this Legendary bounty.

A serial arsonist wanted by the law for burning down homes in St. Denis, and killing women and children in cold blood. West of the Van Horn Trading Post in Fort Brennard, North of St. Denis, is where the Legendary Bounty will be hiding out. After fighting to get inside; there will be red explosives lined throughout the inside of the walls, along with be a second wave of enemies surrounding the Fort outside. To avoid being damaged by the red explosives, players can shoot them from a distance or just stay away from them. Cecil C. Tucker will be hiding out in a small camp on the east side of Fort Brennard, in a brawl with a few of his enemies. Be careful when shooting at the others and be sure to avoid hitting the target. Remember, these Legendary bounties are worth more alive. Once Cecil is in captive, take him Northeast to the Van Horn Trading Post to the sheriff's office and collect the reward.

Wanted for the murders of several men, and for the disappearance of a U.S. Marshall; Yukon Nik will be in a camp in Fort Riggs, located in West Elizabeth, between Strawberry and Blackwater. He will be in the middle of the area, holding the Marshall hostage. Players will have to fight Borodin's Gang and their attack dogs to reach Yukon. After completing the dead eye sequence to take him out and save the Marshall. Kill off the next wave of enemies, secure the bounty, and head Northwest to the sheriff's office in Strawberry and collect the reward.

Wanted for thievery, extortion, and murder; Barbarella Alcazar will be in Gaptooth Breach, located West of Tumbleweed, near a mine area. Players will find a gang in the area and whether they choose to kill them off silently or light the place up, is strictly up to them. Barbarella will be locked away upstairs, and the best way for players to get to her is by climbing on the roof and going through the window. Keep a horse nearby for a quick escape after subduing the bounty and head to the North of Tumbleweed. Be sure to have weapons locked and loaded for the gang resistance along the way to the sheriff's office, when dropping Barbarella off and collecting reward.

Wanted for train and coach robbery, located Southwest of Saint Denis, is a goods yard that is actually about to raided by none other than, Etta Doyle and her gang. All dressed alike, with scars down cheeks; Etta will be difficult to spot. It's best to make the gang scatter, by chasing them down, then players can take the Red Dots (marked on their map) out first and capture the marked Bounty Targets until capturing the Legendary Etta Doyle. The sheriff's office is a quick ride through Saint Denis. Drop off the bounty and collect the reward.

Wanted for multiple murders and barbarism, including cruelty towards animals; players will be given the task of rounding up a whole family of four Legendary Bounties, instead of just one! In New Austin, around the Rio Bravo area, players will be given four locations to search. Secure each bounty in Fort Mercer, Solomon's Folly, Benedict Pass, and Benedict Point. Mommy Owlhoot may be the sneakiest of the lot; hiding in the basement under the house. Players can track her down by looking for the stairs on the southside of the house. Take the Legendary family of Bounties to the jail wagon that is parked East of Benedict Port.

A former military sharpshooter, wanted for an attempted plot to kill the governor of Lemoyne; Sergio Vincenza will be in a tower located in the center of a camp, towards the Eastside of New Hanover. The target will be armed, dangerous, and ready for any enemies, including Bounty Hunters. Kill off the guards while making way to the tower and make sure to keep cover to avoid any snipers. As players get closer to the tower, rush the target to make it difficult for him to aim with a sniper rifle. Once Sergio is captured and secured, tie him up on a horse and head Northeast to Annesburg to drop the Legendary Bounty off at the sheriff's office for a reward.

A politician wanted for larceny and embezzlement; this target is unlike the usual bounty hunts in RDO. Before collecting Tobin Winfield, players will have to protect this Legendary Bounty and complete a mission, before capturing and bringing him in for a reward. Tobin has knowledge of the location to some Deeds. A gang of enemies will get to Tobin before players find him in Thieves Landing. Lure the gang away from the area to take them out, without having to worry about the target getting killed. Protect the Legendary Bounty long enough for him to reveal the location of the Deeds. There will be a second wave of enemies players will have to deal with before riding West to Armadillo, and dropping him off at the sheriff's for a reward.

An outlaw, wanted for train robbery and murder; players will have to track down Red Ben Clempson, by getting in touch with an old associate of the Legendary Bounty. Meet and bribe the informant to discover Red Ben's location is on a moving train, riding North of Tumbleweed. Players will find their target in the first carriage at the front of the train. Ride the tracks until catching up to the train and jumping on. Fight off enemies, while making way to the front carriage. Players will have to subdue the bounty, and stop the train before getting him off of it. Take out the driver in the engine of the train, and follow the instructions prompted to apply the brake. Get Red Ben off of the train, load him up on a horse, and riding Southwest to Tumbleweed to give him over to the sheriff for a reward.

Had enough of being a law abiding citizen in the Wild West? Explore a career in the Moonshining Business with our list of Red Dead Online Moonshine Shack Locations.

How to find Madam Nazar in Red Dead Online