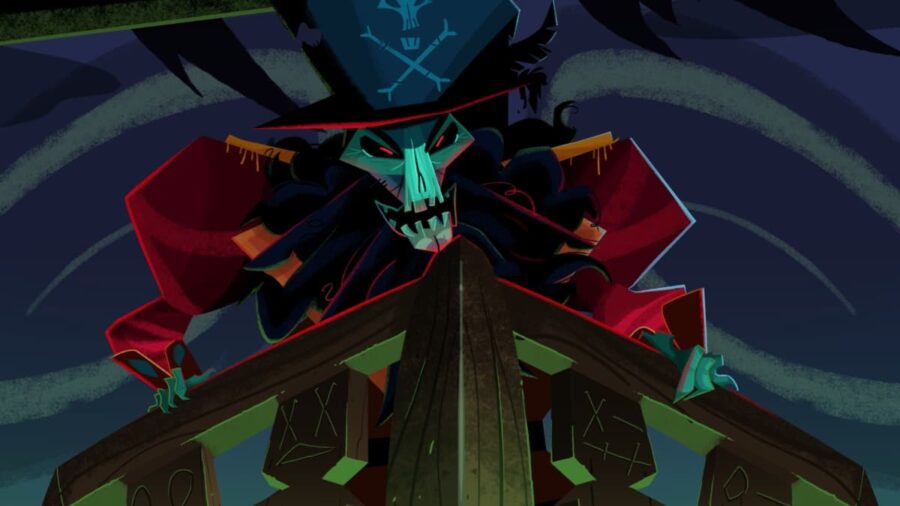 The Return to Monkey Island sees our old point-and-click hero Guybrush Threepwood back in a starring role alongside his long-time nemesis LeChuck. As we've come to expect, things don't exactly go to plan, leaving Guybrush needing to help the unpleasant Captain Maddison if he wants to find the secret of Monkey Island. They need some personal info on LeChuck to make it happen. So, how do you find LeChuck's secrets in Return to Monkey Island?

You're tasked with finding out three pieces of information, all of which will need you to go back onto LeChuck's ship. You already have a way to sneak back onto the ship—you just need to quiz the crew to find out all you need.

What is LeChuck's theme song in Return to Monkey Island? – Casual mode

To find this, simply go to the lower deck and across to the upright barrel by the entrance to the ship's galley. It's on a piece of paper there. If you read it, you'll find the notes (do, do, mi, sol, fa, fa, re) written on it.

How to get to LeChuck's theme song – Hard mode

You'll have to talk to Flair to find out LeChuck's theme song on Hard mode. She's composing the music in the ship's galley, but she won't give it to you. Go to the top deck and ring a bell once to get the notes. Flair will leave her spot, so that's your chance to return to the ship's galley and pick up the theme song.

Related: What’s the difference between Casual and Hard mode in Return to Monkey Island?

What is LeChuck's catchphrase in Return to Monkey Island? – Casual & Hard mode

If you talk to Bob, he'll regularly tell you the captain's catchphrase changes. Go into LeChuck's cabin and grab his diary from the shelf. If you read through it, the last entry mentioning a catchphrase sends you back through the diary to the 17th – when it was Plunder the seven bilges. This may change, but it's always the catchphrase from February 17.

What is LeChuck's favorite food in Return to Monkey Island? – Casual mode

Go into the ship's galley and ask Putra about LeChuck's favorite food. She'll tell you it's Tentacles with daisy sauce. However, she can't make you it because she doesn't have any daisies. You can collect some daisies from the path that leads to the Giant Monkey Head just before you reach Captain Maddison. She'll make the dish for you – be sure to pick it up from the table.

How to get LeChuck's favorite food — Hard mode

Talk to Putra to get LeChuck's favorite food on Hard mode. She won't tell you anything as you were never nice to her. Complement her "Chef" skills, and she'll be happy to prepare Tentacles with daisy sauce. Unfortunately, she's out of tentacles, so you'll need to find one. Return to the beach near the volcano and look for dead squid on the right side. Use the knife to cut one tentacle and give it to Putra. She'll prepare LeChuck's favorite food for you!

What to do with LeChuck's Secrets in Return to Monkey Island

With the information you need and the dish in hand, head back to Captain Maddison. To complete the Secret ritual, you'll also need to collect all skulls from Monkey Island. If you have everything, you can now perform the ceremony using LeChuck's theme song, catchphrase, and favorite food!

Want more Monkey Island goodness? We've got you covered at Pro Game Guides! Check out guides like How the Hint Book works in Return to Monkey Island.