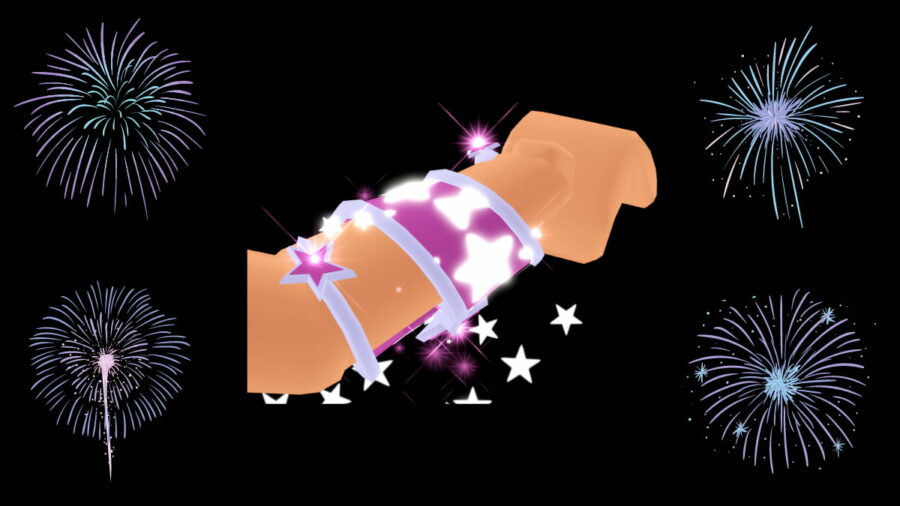 The Royale High New Year's quests for 2022 have officially been released and, similar to the 2021 New Year's Quests, players are attempting to earn the coveted Midnight's Strike Popstar set! There are a total of six quests to be completed, with each quest awarding a different part of the set. In this guide we'll be walking you through how to earn the Midnight's Strike Popstar Celestial Armlets by completing the Paint quest.

To begin the Paint quest, you'll first need to locate and speak with the NPC ixChoco, Royale High's real-life graphic designer, who can be found in the New Year Realm's central park, near the New Year's Party Stage. Upon speaking to her, ixChoco will ask you if you'd be willing to take the time to collect five of her missing paints—agree to help her to receive your first riddle.

The answer to the first riddle is rather easy, simply head towards the New Year's Party Stage and look to the left of the NPCs nightbarbie and launcelotdev92—the pile of blue paint will be slightly in front of them.

To solve the second riddle, head towards the sewer entrance located on Friendship Drive—if you've completed the Puppy quest, this is the same entrance used to find Jhin. The pink paint can be found directly under the Friendship Drive street sign, along with the third riddle.

The green paint is by far the hardest to find, as it involves maneuvering through the sewer maze. For an easier start, we'd suggest heading towards the other sewer entrance and climbing into the sewer from there, rather than starting at the entrance on Friendship Drive. The second sewer entrance, located near the movie theatre, is pictured below.

Once inside the sewer, follow the water until you reach the long hallway pictured below. To continue on the correct path, walk past the first two turns on your right and take the last turn on the left.

Now, continue straight until you reach a dead-end—do not turn down either of the paths along the side.

At the dead-end, turn left.

After this turn, you should be facing another dead-end, however this time, you'll notice a small vent on the ceiling.

Upon approaching the wall beneath the vent, your character will begin climbing an invisible ladder that leads into a small crawlspace—this is where the green paint, and fourth riddle, can be found.

To solve the fourth riddle, exit the sewer, either by retracing your steps or resetting your character from the Roblox menu, and return to ixChoco. Standing next ixChoco is a smiling snowman—look behind this snowman for the missing white paint and final riddle.

To find the final missing paint, turn your character so that you're looking behind the snowman—in the distance, you should see the Luxury Highrise Apartments building. Approach the front doors of this building to find the yellow paint.

After collecting all five paint colors, speak to ixChoco once more. Upon doing so, she will thank you for your efforts and award you with the Midnight's Strike Popstar Celestial Armlets!