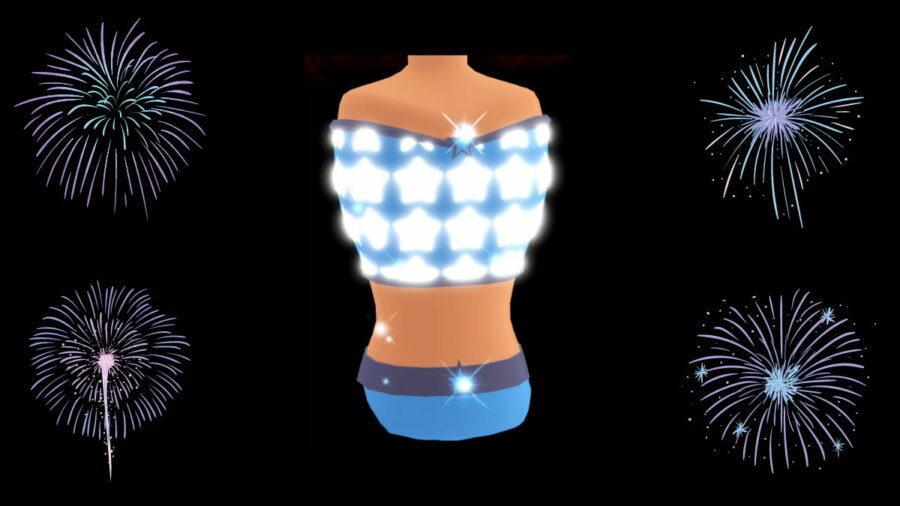 The Royale High New Year's quests for 2022 have officially been released and, similar to the 2021 New Year's Quests, players are attempting to earn the coveted Midnight's Strike Popstar set! There are a total of six quests to be completed, with each quest awarding a different part of the set. In this guide we'll be walking you through how to earn the Midnight's Strike Popstar Constellation Bodice by completing the Puppy quest.

To begin the Puppy quest, you'll first need to locate and speak with the NPCs nightbarbie and launcelotdev92. These NPCs can be found in front of the New Year's Party Stage in the New Year Realm.

After speaking to nightbarbie, she will give you the first puppy riddle pictured below.

In order to solve this riddle, you'll need to fly up into the sky and land on, you guessed it, the moon! To begin flying, double-tap the space bar, press the forward movement key, and aim your cursor in the direction that you want to fly.

Waiting for you on the moon will be Zed, snoozing away with the next riddle.

Fly away from the moon and towards the movie theatre across from the New Year's Party Stage to solve the second riddle. To the right of the movie theatre, you should see a small boutique window filled will three mannequins and even a furry friend!

In order to reach this pup, you'll need to fly over the gated alleyway between the movie theatre and boutique.

After flying over the gate, continue straight until you've reached the back of the boutique. At the bottom of the boutique's back wall, you should see a small hole with a trail of dog treats leading into it—fly through it to reach Syndra!

The crawl space is a bit tight, so it may take a few seconds to maneuver through. Once you've made it to the other side, click on Syndra to collect her, along with the third riddle.

The third riddle is by far the most difficult to solve of the four, and the most time consuming to complete. To get started, head right from the boutique until you see a large manhole in the middle of the road—you'll know you've found the correct one if it has green paw prints leading away from it. Click on the manhole to open it.

Once open, hop inside and you will enter the sewer.

Now, for the hard part. Randomly scribbled on various sewer walls are parts of a four-digit code, an example of which can be found below.

It may take several minutes to find all of the code's parts, so don't get discouraged if it feels like you've been walking around in circles for a while. Once all four of the parts have been found, keep your eye out for a purple, sparkling dead-end—this unique wall is merely a hologram and can be walked through, unlike all of the other dead-ends located throughout the sewer.

After finding this hologram wall, walk through it—you will begin falling deeper into the sewer until you've reached the secret lair. Unsurprisingly, the door to the lair is locked, and will require you to input your code in order to open it.

Approach the door and click the keypad to begin inputting your code—the key is to enter the letters in their corresponding number order. For example, our code was 1B, 2C, 3L, 4D, so the four-digit code to be entered into the keypad is BCLD. After you've entered the correct code, the door will open.

Walk through this door and you will enter Jhin's secret puppy lair! Approach Jhin's bed to collect him, along with the fourth and final riddle.

Luckily, the final riddle is the easiest to solve, making Cupcake the easiest puppy to find. Simply leave the lair (it's probably best to just reset your character from the Roblox menu), and head back to nightbarbie and launcelotdev92—Cupcake will be happily hiding behind her owners!

To finish this quest, click on Cupcake to collect her and receive one last note.

After collecting Cupcake, speak with nightbarbie and launcelotdev92 once more. Upon doing so, they will thank you for your efforts and award you with the Midnight's Strike Popstar Constellation Top!

Looking for more Roblox content? Be sure to check back with the Roblox section of Pro Game Guides often for the most up-to-date code lists, news articles, and guides like this one!