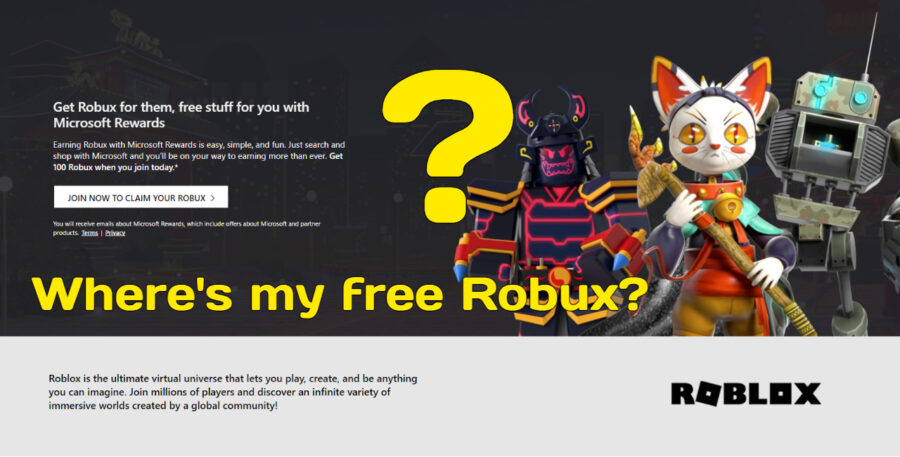 UPDATE 12/30/2020, 4:15 CT: Microsoft has tweeted that they have run out of Robux codes due to popular demand. We've added the information to this story.

Microsoft rolled out a promotion yesterday through Microsoft Rewards that allowed U.S. users to claim 100 Robux for free. Except, just one day later it no longer seems to work. Microsoft has provided more information.

Microsoft Rewards: Why can't I get free 100 Robux?

Microsoft has released a statement for why the free 100 Robux can no longer be redeemed through Microsoft Rewards. Apparently the company has run out of codes due to popular demand.

This promotion has exceeded our expectations! We are working on getting codes in the coming days to eligible members who are still awaiting them. If you missed out on the promotion, we plan on making it available again at a later date for new Microsoft Rewards members in the U.S. https://t.co/860YZnKVGr

The silver lining: Microsoft plans to release more free 100 Robux codes in the next few days. We'll be sure to update this page as soon as we hear word of more codes, so keep checking back!

Here's what we can confirm:

We recommend testing the promotion out over the next few days for yourself using our original guide to see if you can claim the 100 Robux.

Below we have compiled a list of FAQs that have come in through the comments. We hope this helps anyone who has thus far been unsuccessful in redeeming the 100 Robux through Microsoft Rewards.

Is the Microsoft Rewards promotion available in all countries?

No. The Microsoft Rewards promotion is only available in the U.S. If you live outside of the U.S. you will not be able to claim the 100 Robux.

When I try to redeem the 100 Robux, the Redeem Now button just leads to the Reward Redeem Page? I cannot find the Robux anywhere?

Microsoft tweeted on Dec. 30, 2020 that they ran out of codes. In just one day, the promotion was apparently very popular. If you've encountered a blank Redeem Page like we did during our second day of tests, it's because Microsoft ran out of Robux codes.

Microsoft has confirmed that more codes will be available in the next few days.

I already have a Microsoft account. Why can't I redeem the 100 Robux?

What is the difference between earning points and claiming the 100 Robux?

However, this is separate from the 100 Robux promotion. Users that reside in the U.S. and create a new Microsoft account are the only users eligible to claim the 100 Robux. Claiming 100 Robux is a one-time redemption.

I'm on a laptop/mobile device. Will this still work?

Be sure to check back to this page as we discover more about the Microsoft Rewards promotion. If you're looking free rewards in your favorite Roblox games, we have a ton of free codes in our Roblox Game Codes post! You can also get a bunch of free stuff via our Roblox Promo Codes page.

Best Eggs to buy in Roblox Adopt Me

Assemble an epic party of 5 in Anime Legends