Head to the paradise island of Themyscira and earn brand new cosmetics in the brand new Wonder Woman x Roblox collaboration!! This event celebrates the future release of the Wonder Woman 1984 movie that will be releasing in 2020. We're taking a look at details on leaks, items, cosmetics, and everything else you need to know in this guide!

There's even more new items you can get from the shops! You can get the Sword and Shield Combo, Wonder Woman Armor Skirt, and Diana's Amazon Top. You can also now watch the Wonder Woman 1984 trailer in the game! 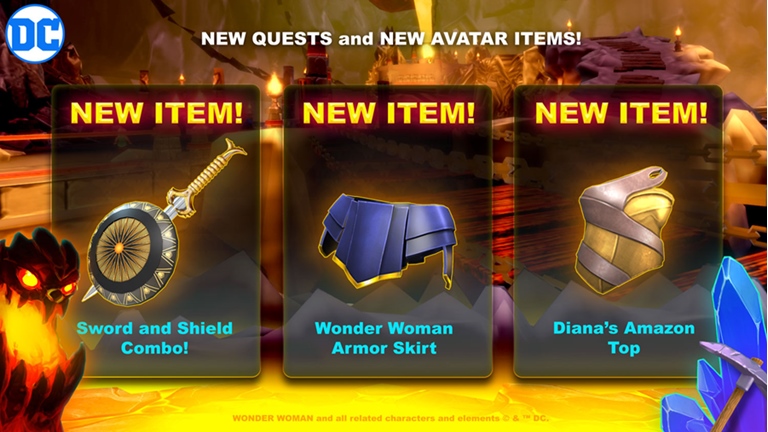 There are three more new items that you can obtain from the Wonder Woman Roblox game! There's Wonder Woman's Sword, Princess Diana's Ponytail, and Wonder Woman Advanced Armor. These are quite expensive, but there are some new quests you can do that should gain you coins much faster. Wonder Woman: The Themyscira Experience was released on June 25th, 2020! You can now play the game via the Roblox Game Page. Here's the description:

Wonder Woman, DC’s Champion of Truth and Warrior for Peace, has arrived on Roblox!

Join Wonder Woman where her story began on the paradise island of Themyscira, train alongside the warrior inhabitants, and lasso up an epic collection of special rewards for your avatar based on Wonder Woman’s most iconic outfits and accessories.

This is just the beginning. New quests, mechanics, and items will be coming soon. Be sure to hit the follow button to be notified of new updates and items as soon as they’re added!

There are a bunch of initial quests you can complete that will get you 20 Gold each. After that, you can go to the middle palace hub and obtain quests from the people in the area. You'll also find other NPCs across the island willing to give you quests. Those quests will give you a lot more gold!

All directions are based on how you face the island from where you spawn! Right side of the island is where you'll see a boat. The way I've listed the quests below can be completed in order if you follow along with the guide.

This is the first quest and is really easy. Once you join the game, just run forward on the bridge and into the island palace where Wonder Woman is located! Once you've done so, you'll see a prompt that alerts you to the completion of the quest. Hit the scroll icon at the bottom of your screen and hit collect on the quest to obtain the reward!

On the right side of the map you'll see a boat and dock area. There's a quest down here that just requires you talk to Faruka. You'll go on a boat and that's all you need to do. You can hit the arrow button at the bottom of your screen to return to the island.

You'll find an Amazon Guard up the stairs from the palace. She'll ask you to figure out how to open the secret door. Two blocks will appear and all you need to do is pick them up and place them on the pads near the Amazon Guard to open it. Inside of this is a couple more of these puzzles that you can complete. They are the same, the only one that might be confusing is the last one. The final pad is on top of the rock area away from where the door is. Make sure to do this because you'll get the Lost McGuffin quest by making it through the final door.

You can only do this quest if you've completed the Open the Secret Door mission. Once you have it, you'll want to go to the palace and outside of it to the right will be a couple of small building areas. In the back of one of them will be the harp you are looking to find. Here's what it'll look like: 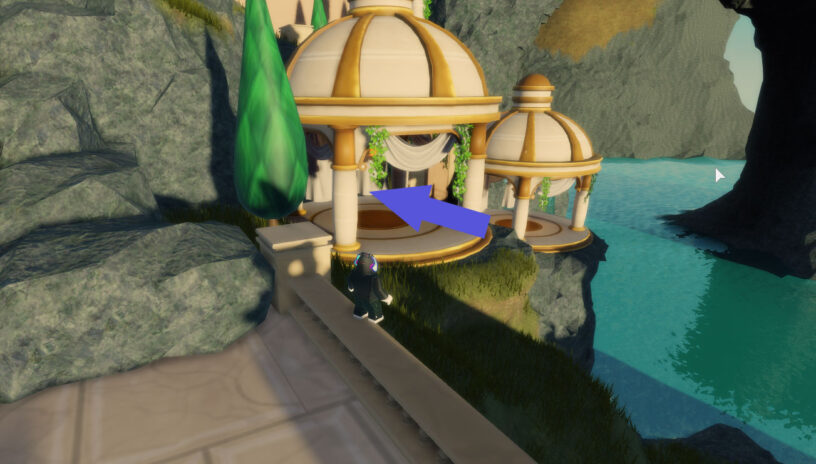 Just head up the stairs to the right until you come to a long path that leads to a huge building that almost appears to be floating in the air. Run up to the building you will eventually get credit for the quest!

Once you're inside the Oracle's Temple, go to the left to find a quest near a portal. Talk to Philippus and walk through the portal to complete the quest. You can now enter this portal from the palace to get back here quickly!

You can obtain the "Get Sword" quest in here from Artemis. As well as the Open Portal Armory quest from Timandra.

Talk to Timandra to start the quest and then walk through the portal to complete it! You can now use this portal to go back and forth between the palace and The Armory.

Head down the path from Artemis and you'll eventually see a big pot pouring liquid metal down into a pool. Head for that and you will talk to Lo who is the Amazon Metal Master. This is a multiple part quest. First you'll need to find five ingots. These can be found by heading back down the path and over the bridges to the small little land masses. These bridges have holes in them, so make sure to jump carefully across or you'll start back at the beginning of the area. There's two paths in this entire area, the one to the right near Artemis and a second one near Timandra and the portal. You'll have to go down both of these and over the bridges to get the ingots.

Tip from the comments: Run along the chains that are on the bridge so you don't have to avoid the holes!

Now that you have the ingots, head back to Lo and she'll great you a sword! Once you have the sword, head back to the beginning of the area and speak to Artemis who has another quest for you. We aren't going to complete this one just yet.

After you're done with the Armory, head to the right of the waterfall and look for some green vines on the stone. You can climb up these to get higher on the island. Once you've  done all the climbing, you'll see a blue lit platform. Stand on that and it will launch you to the top of the mountain and give you credit for the quest!

Top of the World

Now that you're up on the mountain you'll see a platform going up and down in front of the Wonder Woman statue. Stand on that and wait for it to get to the top to finish the Top of the World quest.

If you go towards the left side of near the huge statue at the top of the island you'll see some land that extends out towards some water and a waterfall. Get to the top area of the waterfall and jump off of it to complete the waterfall jump quest! Turn around and swim towards the camp you'll see...

Swim your way to the camp area and you'll complete the hidden beach and Amazon warrior camp to complete two quests at once!

Talk to the Amazon Warrior and she'll want you to break through a wall nearby. Pick up the block next to her and throw it through the wall to break it. Do the same thing to the next wall inside the cave and talk to Menalippe to obtain the Lost Amulet quest. Go outside of the cave and talk to Euboea.

Talk to Euboea gives you this quest. All you need to do is lie down in one of the tents, sit on the log near the fire, then light the fire! Head up the ramp near Euboea and look down to the right on the beach for a glowing ball which leads into the next quest...

Talk to Epione and she will give you the quest. All you need to do is kick the golden orb you'll see in this area 10 times to earn 20 gold!

Go up the ramp from where you came from and head towards the middle of the island. You'll come across Aella and talk to her. This activates the Corrupted Rats quest wse got from The Armory!

Right behind Aella there's a small area of grass where Corrupted Rats spawn. Just run up to them and click or tap on them to kill them. You can repeat this quest multiple times to receive more gold. You kill 5, 10, then 25 rats to earn gold for each milestone. Once you've done 25, you can no longer kill them anymore.

Go back to where Aella is and face her, now turn to the left to go up some stairs. Hang a left up some more stairs, go left again towards the Amazon Guard and up the stairs near her, now turn right and go up those stairs, where you'll see some columns and red carpet. Run to the back of this area and look to the corner to find...

You will find the Lost Amulet if you followed the location advice listed in the previous quest. Here's what the area and amulet look like: 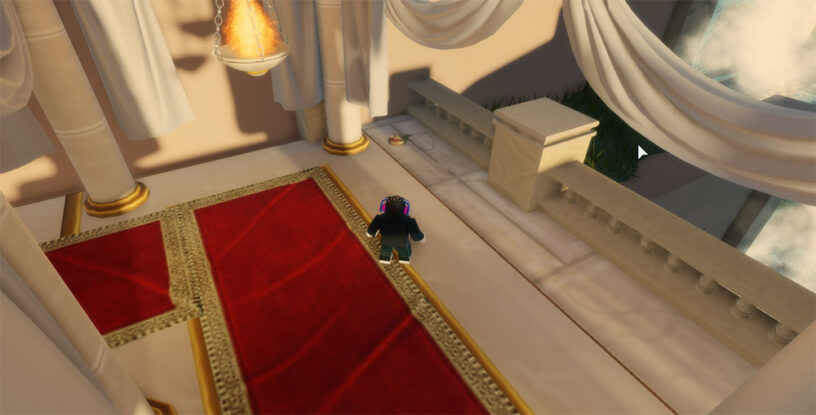 That's all of the quests, but you'll notice this isn't enough gold to obtain all of the items. What you can do is repeat the Corrupted Rats quest over and over. Head over to Aella again and talk to her to receive the quest again. You can now slay the rats all over again to complete the quest. Do this over and over until you've got enough gold for all the items you want!

If you want to check out a video of everything, here's a guide that has been created:

Here are some of the cosmetics you can buy in-game with coins.

We know this will be a new game you can play, and there will be badges to complete and cosmetics to be earned. However, we don't know much about the gameplay itself right now. You can get a bit of information from the image that is featured on the game: It's likely to be an action adventure game held on an island where you'll be defeating foes and using Wonder Woman's signature weapons and fighting styles to do so. We know it's probably going to be an item due to some of the leaks that came out that show pieces of the environment. When they are put together they make an island similar to the one above (Credit to Bloxy News): 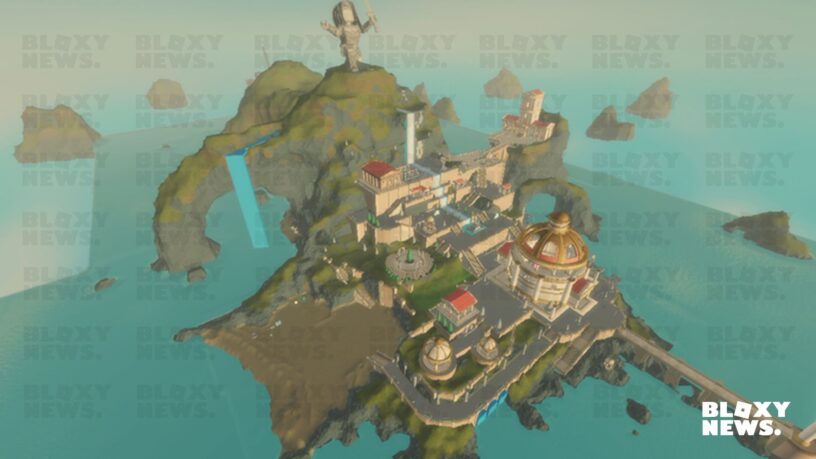 That's everything we know about the Roblox & Wonder Woman event so far! We'll be adding more information as soon as we learn anything, so be sure to check back soon.