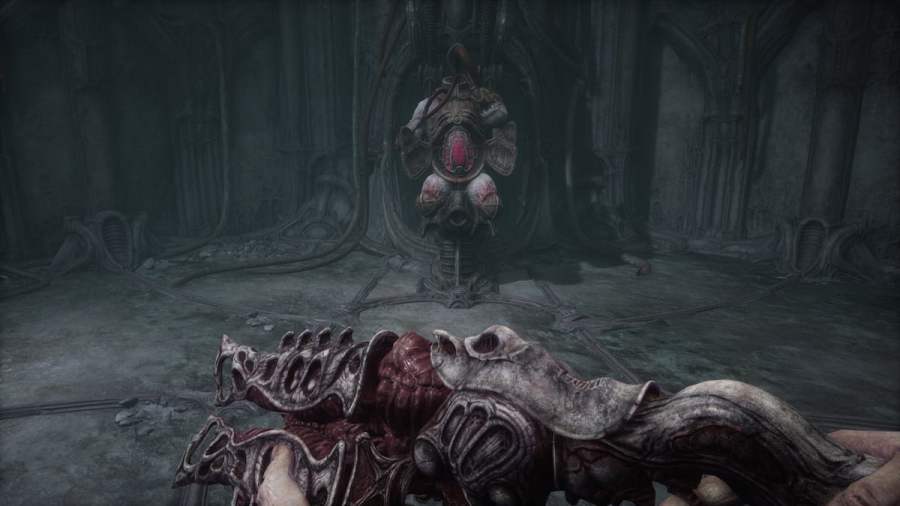 The boss in the fifth Act of Scorn doesn't go down by just pumping ammunition into it. Players that encounter the boss will have to be ready to attack it when it reveals an opening. The fight requires baiting out attacks, as well as waiting for the boss to reload. The attacks can take out a lot of the player's health, so getting to the health station before starting the fight is highly recommended. This is how to beat the Act 5 Boss in Scorn.

How to beat the boss in Act 5 of Scorn

There are multiple achievements found during Act 5 of Scorn, with the boss fight in the way of all of them. Before starting the fight, two stations can be found by the encased fetus to supply ammo and healing. When the fight begins, the boss will either try to attack the player with its arm when in melee range or it will shoot grenades when further away. The key to the fight is to wait for the boss to reload. While reloading, the boss will reveal two sacs on either side of it. After a few shots at both sides, the boss will seemingly be defeated.

The second phase of the boss fight is a bit different from the first and requires that players bait out a melee attack from the boss. This can be done by strafing the grenades and waiting for the boss to wind up for a melee attack, exposing its insides. This only has to be done twice to defeat the boss, but can take some time. There are two melee attacks that the boss can perform and only one of them exposes its weak point. While exposed, any shot on the boss will do damage to it, not just a direct shot to the fetus.

How to beat the second boss in Act 5 of Scorn

To get to the next fetus, players will have to step on the pressure plate in the room after they take the grenade launcher from the boss. Firing at the pillars will let players reach the fetus to place it into another android stomach. Doing so will immediately start the second boss fight.

The second boss fight requires waiting for the boss to reload, just like the first boss fight. When it is reloading, it won't open its stomach again, but it will reach behind it to reload. A single grenade shot inside will kill the boss and give players the last fetus they need for Act 5.

How to beat the Act 5 Boss in Scorn