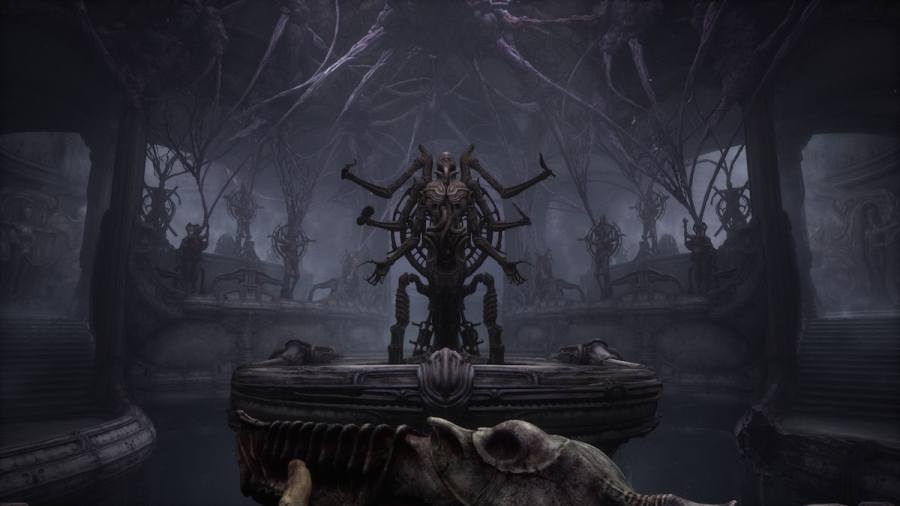 Scorn is a horror game with no dialogue or text, making players come to their own conclusions about the story and what it means. The game relies on environmental storytelling and grotesque imagery that paints a bleak picture. The game's achievements give a little bit of insight, as well as the artbook, but much of the game is left to interpretation. The ending that players get won't change, but there are choices for it. This is everything players need to know about the ending of Scorn and what it means.

How many endings are there in Scorn?

The ending to Scorn remains the same regardless of what the player does during any of the Acts. Some puzzles have alternate solutions, like what to do with the humanoid in Act I, but it does not affect the end ending of the game. This decision has two achievements attached to it, getting players closer to getting all the achievements in Scorn. Playing passively and refusing to kill any enemies doesn't change the game's ending either, although it is a viable strategy to get through the game quickly.

What does Scorn's ending mean?

The ending of Scorn is open ended with much of the symbolism explained in the game's art book. What happens can be covered broadly, however, any specifics to do with the story or theories about the game aren't definitive. By the end of the game, players will find themselves in a holy place, surrounded by statues depicting many sexual acts between male and female humanoid creatures.

The objective of the final area of the game has players crush down what appear to be fetuses in order to fill up two bodies with blood. Once they have been filled, their third eye opens and the player is taken to a machine that performs surgery on them once interacted with. This is done after already undergoing an extraction procedure, removing the parasitic creature that has been latched onto the player since Act II.

This creature is actually the mutated version of who the player assumes control of through the first Act of the game. When players assume control of the second protagonist, many years have passed since the first protagonist succumbed to his injuries after using the drones in Act I, becoming covered in some type of liquid. By the end of the game, the character has their brain dissected and attached to a network of minds above them, a fate that many other humanoids seem to have gone through. The player then assumes control over both bodies and is able to free the protagonist and carry them to the end of the game.

In Scorn's world, humanoids seem to be birthed from pods in a wall, as seen when first introduced to the two protagonists in the game with them removing their umbilical cords. At the end of the game, it isn't clear what the ritual is for, but it is clear enough that humanoids aimed to reach a higher plane of existence. The creature on the mural looks to be eldritch inspired, or what people can assume is a great one. The story could be the result of trying to reach a higher plane, or it could be trying to escape the wasteland that they were born in, but unfortunately, players may never know the answer to this question. The first protagonist, the parasite that was attached to the player for so long, stops them before they can be carried out and the two become a single, immobile, flesh monster just a short distance away from their escape.

Are there multiple endings to Scorn? Ending Explained