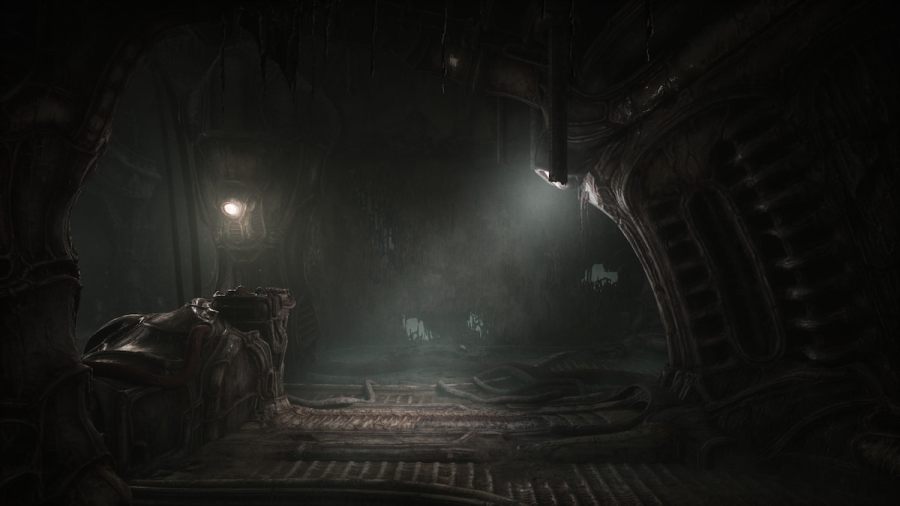 Players can relax in knowing that Scorn is not a game that will require multiple playthroughs in order to get all their achievements. All but one are impossible to miss as they are story related and will unlock as players progress. Getting every achievement should only take between five to seven hours, but can be higher or lower depending on whether players get stuck. This is how to earn all 12 achievements in Scorn.

How to unlock 001 - Extraction in Scorn

This achievement is missable. During Act I of Scorn, players will have to solve a sliding puzzle in order to proceed. There are two ways to move the game forward, each having an achievement attached to their solution. After getting the creature onto the tracks, players must move them into one of two rooms. This can be done by traveling to the center of the room and changing the tracks with the device. Leading them to the room with the giant saw will free them, earning players 001 - Extraction. As soon as the achievement is earned, players can reload their save and take the creature to the other room for the second achievement.

This achievement is missable. Similar to the steps to earn 001, to earn 002 - Hand in Hand, players must lead the creature that they obtained from the sliding puzzle to the room with the egg scooper. Despite looking like the safer of the two rooms that players can lead their new friend to, this device will kill the creature, giving players their arm to advance forward. As soon as players retrieve the arm from the corpse, they will earn their achievement. Reloading after earning this achievement will cause players to go back to when the creature was still alive and can push them to the other room to earn the 001 achievement.

How to unlock 003 - Hazardous occurrence in Scorn

Once players acquire their first weapon in Act II, they will activate a device that causes sentries to be sent out. In addition to this, they will have more devices for a drone to pick up and attach to a central device that will open the door. To earn 003 - Hazard occurrence, players have to activate both sides with their weapon and use the drone to plant devices to the center.

How to earn 004 - Close encounter in Scorn

In the second part of Act II, players find themselves spotted by a crawling creature that disappears whenever they get close. After a few encounters with this creature, players will then find a corpse that they obtain a key from. This key upgrades after reaching certain consoles in the level, but after the final encounter with the creature, players will earn their achievement once it has grappled onto them.

How to earn 005 - Key possession in Scorn

After obtaining the key and searching the area to slot it with additional parts, players will get four notches for their key. When using it on the device by the four red pods, they will have to solve a puzzle that opens them up. Inside the closest pod, players will obtain another key with lights on it. This will earn them the achievement 005 - Key possession.

How to unlock 006 - Path forward constructed in Scorn

In Act III, players have to activate many lifts to get through the level. After getting another weapon, players will have to unlock two parts to cause a lift to descend far enough to be taken to another part of the level. This is done after avoiding or killing enemies found in the level and solving two puzzles. Once players have gotten the lift to where they want it to be, they will leave the level and earn the 006 - Path forward constructed achievement.

How to unlock 007 - At the lowermost point in Scorn

This achievement is unlocked at the end of Act III and requires players to use the many switches in the level to get to a console that upgrades their key. Many enemies are around this part of the game, but not all of them, have to be fought in order to advance. After upgrading their key, players will unlock achievement 007 - At the lowermost point once they have activated the switch for them to leave and walk to the next area.

How to unlock 008 - Station to Station in Scorn

In Act IV, players have to search around what seems to be an abandoned ship infested with creatures. They must gather three consoles that all end up in the center and must be activated by solving a maze puzzle. This destroys the creature that the ship is connected to and frees the player to travel to a train that advances to the next Act. Once players step foot in the next area, they will earn their achievement.

How to unlock 009 - Detachment in Scorn

In Act V, players must gather blood to then inject into two bodies that are attached to a machine. When collecting the blood, they will encounter a boss fight. After the fight, the parasite that has been attached to the player since Act II will completely cover their hands, forcing them to use a machine to cut their arms so they may use their hands for a short time. Players will eventually find an extraction machine that they must use to remove the parasite entirely, freeing them and their hands to continue through the rest of the level.

Related: Best Multiplayer Horror Games you can play in Co-Op (2022)

How to unlock 010 - Fluid flowing within in Scorn

After removing the parasite, players will have to go back with the blood to feed into the last corpse found earlier in the level. Beside the extraction machine, a gate locked by a console will now be usable. Players must limp to the largest building and travel downstairs to find the corpse again, activating an elevator. Once players reach the top again inside the large building, they will unlock achievement 010 - Fluid flowing within.

How to unlock 011 - Perception beyond in Scorn

Once players have activated the elevator, they must place themselves in the device in the center of the room. After the procedure has been done and a cutscene plays, they will find themselves in control of the two corpses from earlier. As soon as they wake as one of the corpses, they will unlock the 011 - Perception beyond achievement.

When playing as the two corpses, players will have have just one more puzzle to solve. With one of the corpses, they must go back and retrieve their body from the device in the center of the room. They must then stand on a pressure plate next to the door. With the other body, they must activate the console that opens up the other half of the door. After the cutscene that plays outside, the credits will roll and players will have earned themselves their final achievement in Scorn.

For more horror game guides, check out How scary is the MADiSON horror game? on Pro Game Guides.

All 12 Scorn achievements (secret) and how to complete them