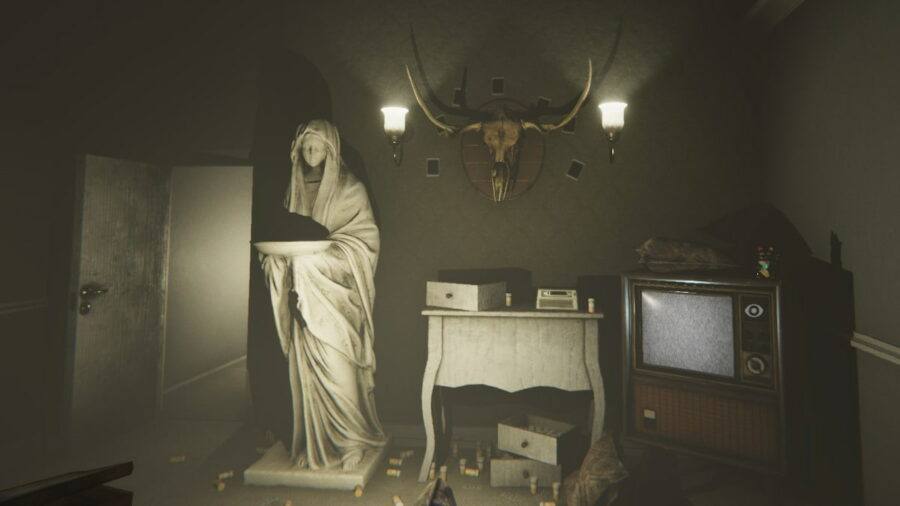 If you're thinking of playing MADiSON, you may be wondering just how scary it is. The tricky part about that question is that "scary" has a different meaning to everyone. So, we've decided to cover commonly distressing aspects of horror and let you know whether or not they show up in MADiSON. We've also answered a few questions in terms of accessibility and sensitive topics.

Is there gore or violence in MADiSON?

There is a noticeable presence of gore in MADiSON. This is unavoidable, and those who prefer to not have gory scenes or depictions in video games should probably avoid MADiSON for their own wellbeing. Severed limbs, entrails, and other miscellaneous gore are seen throughout the game.

For those who have a moderate tolerance for gore, the game may be fine. While seen throughout the game, the gore is not a constant force that you have to directly handle or do gameplay mechanics with. For example, another game that has a tremendous amount of gory content is Martha is Dead, which has you peel off the face of a person. MADiSON is much milder than that in terms of violence and gore.

There is a fair amount of violence in MADiSON, but we did not find it to be highly involved or excessive. The extent of the violent content in the game includes a demon briefly grabbing the protagonist, the protagonist being dragged, and other instances of that manner. Even the most violent scenes in the game tend to be brief. This is because MADiSON tends to rely more heavily on visual horror (flickering lights, monsters rushing by, etc.).

Are there jump scares in MADiSON?

In MADiSON, you will encounter many jump scares. If you are particularly sensitive to jump scares or do not enjoy games with them, we recommend you skip playing MADiSON. Through various parts of the game, you will be required to walk in dark areas in first-person mode. While doing this, different nefarious creatures will jump at and even grab you. There are also audio enhancements to go along with the jump scares, meaning the music will get louder and discordant.

Related: How long does MADiSON take to complete?

Are there any flashing lights in MADiSON?

Within the MADiSON game, there are several instances of flashing lights and bright colors that could cause seizures. All throughout MADiSON, you will see faintly flickering lights, but these occurrences seem to be mild in nature and stop after their momentary occurrences. There are a couple of scenes in the game where the flashing lights are especially overwhelming for players.

Depending on who you are and your personal sensitivities, you may find certain depictions or themes especially upsetting. For that reason, we've broken down commonly triggering topics and explored whether or not they are seen in MADiSON. We have even described the severity of their appearances.

Is there suicide or self-harm in MADiSON?

There seems to be no self-harm in MADiSON, such as wrist cutting or skin burning. We did find, however, a scene where a character hangs themselves with a noose while at home. This scene is in first-person, so you do not see too much, but it may still be distressing.

In MADiSON, are there lots of bugs?

There are not many different types of bugs in MADiSON, but there is plenty of one type. While playing MADiSON, you will see excessive and constant appearances of cockroaches. Cockroaches are seen just about everywhere in the game, so those sensitive to this may reconsider playing.

Related: How to get the generator working in MADiSON horror game

Do animals die in MADiSON?

Is there lots of shaking or motion blur in MADiSON?

There is quite a notable issue in the game with motion blur, movement shaking, and other aspects that could trigger motion sickness or other ailments in some players. Thankfully, the developers released an accessibility patch on July 12, 2022, to give players the ability to change this in the settings.

Are there mentions of eating disorders in MADiSON?

There are no mentions of eating disorders in MADiSON. This extends to eating disorder behaviors, commentary, or general appearances. We could not find any content that could be interpreted as related to disordered eating or specific eating disorders like anorexia or bulimia.

Do any LGBT or POC characters get harmed in MADiSON?

While we do not exactly know what the protagonist's orientation or ethnic identity is (this includes other characters mentioned or shown), there are no direct depictions of harm toward POC or LGBT people. There are no slurs or derogatory comments made about race, orientation, or gender in MADiSON.

Are there harmful depictions of mental health in MADiSON?

There do not seem to be any overtly harmful depictions of mental health conditions in MADiSON, especially not specific mental health disorders. Luca, the protagonist, does mention several times that they always thought his grandfather was crazy for his odd behavior. To accompany this, the depictions of the grandfather's living conditions (mess, hoarded items, and filth) may be triggering for some.

There is also a scene at the very beginning where it initially appears as if Luca's father is having a mental health episode, but it turns out to be distress from supernatural events. Specific mental illnesses or derisive comments about mental health are not made. Additionally, there is a scene where a character hangs themselves, but mental health is not directly mentioned.

Need help when you get started playing MADiSON? If so, check out Where can you find your camera in MADiSON? on Pro Game Guides.

How scary is the MADiSON horror game?