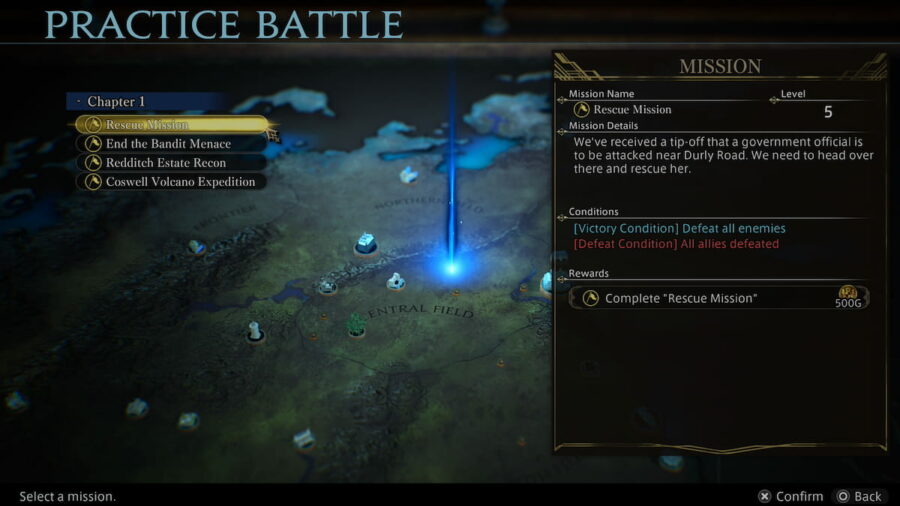 How to replay missions in The DioField Chronicle

You can replay missions in The DioField Chronicle but not straight away. You must have completed the second mission and started the Sub Quest, The Chains that Bind. During this quest, you'll unlock Practice Battle, which allows you to replay missions from a war table where you find the Institute in the room to the shopkeeper's right.

In The Chains that Bind Sub Quest, once you have completed the mission tied to this quest, Coswell Volcano Expedition, return to base and speak to the researcher. Once done, a soldier behind you will mention he wants a word with you, and he will unlock Practice Battle.

Related: Is there Permadeath in The DioField Chronicle?

Practice Battle is exactly how it sounds. It allows you to replay any mission you've done previously. Whether to level up, find unfound treasure chests, or beat any time requirements to get a bonus reward. To start a Practice Battle, interact with the table, and choose the mission you want to replay.

However, you can only get rewards once, but you still earn money. So earning 600G for less than three minutes of work is nothing to scoff at, especially since everything is so expensive in The DioField Chronicle.

Another thing to note is that enemy levels do not scale with you. So you will be at a much higher level than all enemies. So getting the time requirements and searching for chests won't be an issue. You'll be slaying everything and everything in no time at all.

Can you replay missions in The DioField Chronicle?