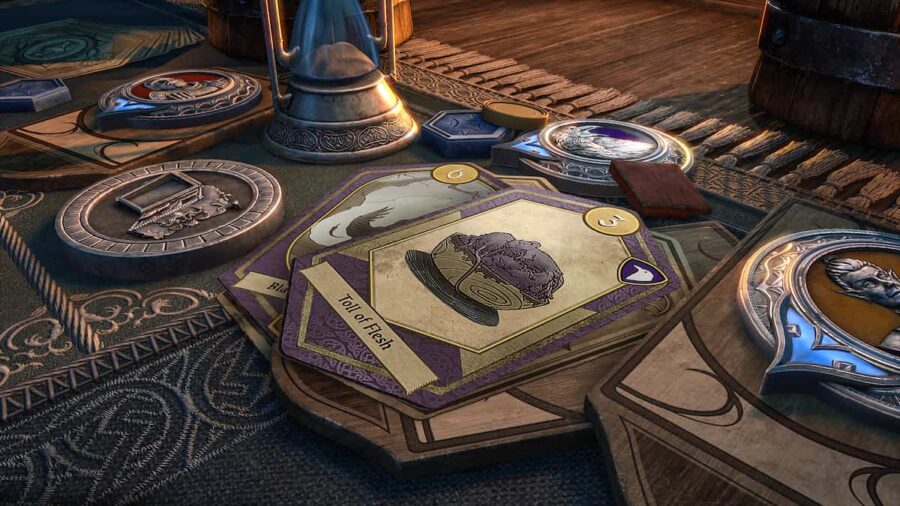 Elder Scrolls Online: High Isle is an exciting expansion that takes you to a never before seen land. These Breton islands are the home of a politically charged story and a new card game called Tales of Tribute. You're likely wondering how Tales of Tribute is played and the point of playing it.

How do you get more cards for Tales of Tribute?

You can get more cards by playing through the Tales of Tribute questline and climbing up the ranks. It's not yet known how many individual cards will be available at the start of High Isle.

In addition, you can get more cards by doing the following:

You will also be able to upgrade cards as you rank up. You will want to create a deck with matching suites, giving you a tactile advantage to win over the Patrons. From the sound of the announcement about the game, there are plans for future expansions to Tales of Tribute as Elder Scrolls Online receives future updates.

What Types of cards are in Tales of Tribute?

There are several different types of cards. The type you will first encounter are coin cards that simply add coins to use during your turn. There are also Agent cards and cards that can grant you power when played. Other cards have effects like allowing you to draw an extra card.

For the most part, these cards help you win Prestige Points and are there to meet the Patron's requirements. For example, a Patron requires you to have Agents, but Agent cards can cost up to eight coins, something that you can't accumulate at the start of the game.

What are the rewards for Tales of Tribute?

While we don't have a specific list of rewards yet, we do have a list of some of the reward types that you can receive from playing Tales of Tribute.

As they rank up, you will receive these and complete quests associated with Tales of Tribute. You can also earn rewards from completing deck sets and earning achievements. Since the game will have a competitive option, there may eventually be prizes from tournaments or for the players with the most wins.

How do you win Tales of Tribute?

Tales of Tribute is a game where you play cards to amass coins each turn. You then use those coins to buy better cards that give you an edge in the game. The objective is to win over four patrons or to make it to 40 Prestige Points to win.

Getting to 40 points first and getting all of the patrons to favor you can be tricky. Your opponent will be trying the same tricks, so you will need to watch their strategy closely. The tricky part is getting started, as you generally have a low amount of coins at the start.

You will want to focus on buying cards from the in-game tavern that match your suites and help you win over Patrons for quick point bonuses. The cards you have down will be removed off the field except for Agents at the end of each turn.

In addition, you will lose your coins at the end of each turn, so you shouldn't hold back on spending them. This also means that you will have to be smart about amassing coins to buy the more expensive and effective cards on the board. At the start, you will only be able to amass five coins in total.

The more suites you play together and the strategic moves you make, the quicker you will collect points. If you can't get enough coins, then consider sacrificing a card to add a two coin card to your pile.

Patrons are special game pieces that are selected before the game starts. They have special requirements for winning them over, like sacrificing an agent card. Patrons will grant you a large sum of points, and if you manage to win over the four Patrons simultaneously, you will automatically win the game.

Once you have met the requirement for getting a Patron on your side, they can be stolen. If your opponent meets their needs and activates them, then they will switch sides and give your opponent a boost in points. This makes it much harder to get all four on your side, as many players will try to block this strategy.

Be sure to steal back a patron from your opponent if they earn one as quickly as possible. The more they can earn, the closer they will be to victory.

Is Tales of Tribute Multiplayer?

Yes, you can play Tales of Tribute with NPCs or play it with other players. There are a ton of different NPCs to play with, and finding other players will likely be easy as well. As long as they have High Isla and have done the tutorial, you will be able to play together.

When you want to play with an actual player, you can challenge them using in-game commands, making it easy to challenge friends and guild members directly. There is also a duel action that will be added in to easily challenge players that you aren't friends with and that aren't in your guild.

There will also be leaderboards attached to the game to help further stimulate Tales of Tribute as a point of interest in Elder Scrolls Online. The game can be played by both new and seasoned players thanks to how ESO handles new expansions.

For more on Elder Scrolls Online, check out All Skyshard Locations from Starter Islands in ESO on Pro Game Guides!

Elder Scrolls Online: High Isle – Everything you need to know about Tales of Tribute