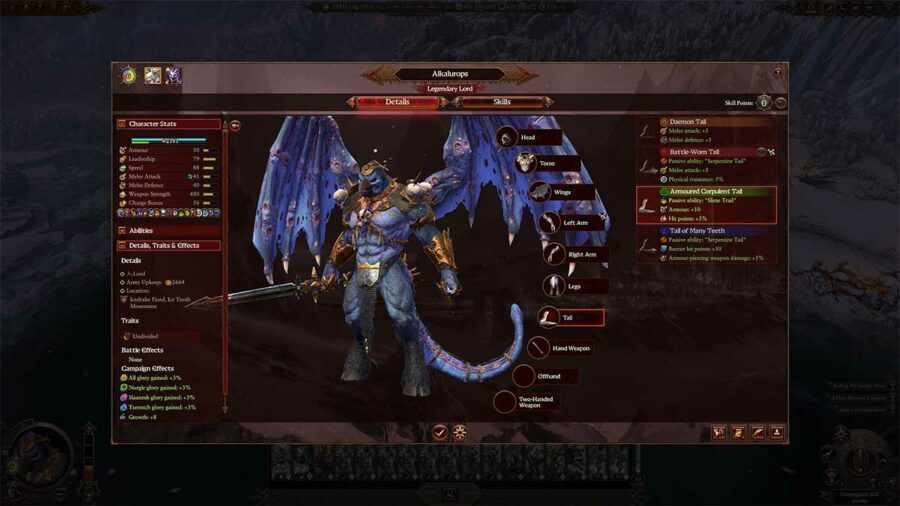 Daemon Prince is the leader of the Legion of Chaos faction in Total War: Warhammer 3. Once human, the Daemon Prince earned immortality and demonic powers by praising the Chaos Gods. His Demonic Glory gives him access to all Daemon races, from which he formed Chaos Undivided.

The legendary lord is highly customizable in-game thanks to his allegiance and servitude to all four Chaos Gods. On the lord selection screen, you can start off by naming your Daemon Prince. Hereafter, you can access the Daemonic Glory tab present in the bottom-right corner of the screen.

There, you will find an inventory filled with unlockable cosmetics, including head, torso, wings, arms, legs, tail, and weapon items. These customizable items are provided by each of the four Chaos Gods and can be purchased using an exclusive currency called Glory.

Glory varies for every God, and you can earn it by doing certain tasks for that particular Chaos God. These tasks include completing missions, building settlements, and dedicating victories to the Ruinous Powers.

Unlocked looks and items for the Daemon Prince can be equipped from the Character Details tab at the bottom of the Daemonic Glory inventory. Here, you can alter your body gear by selecting from a wide array of items that you have unlocked.

You can either customize your Daemon Prince to represent a variety of Gods or just one God specifically. Total War's developer has also shared a brief video showcasing the numerous personalization options for Daemon Prince.

How does Daemon Prince customization work in Total War: Warhammer 3?