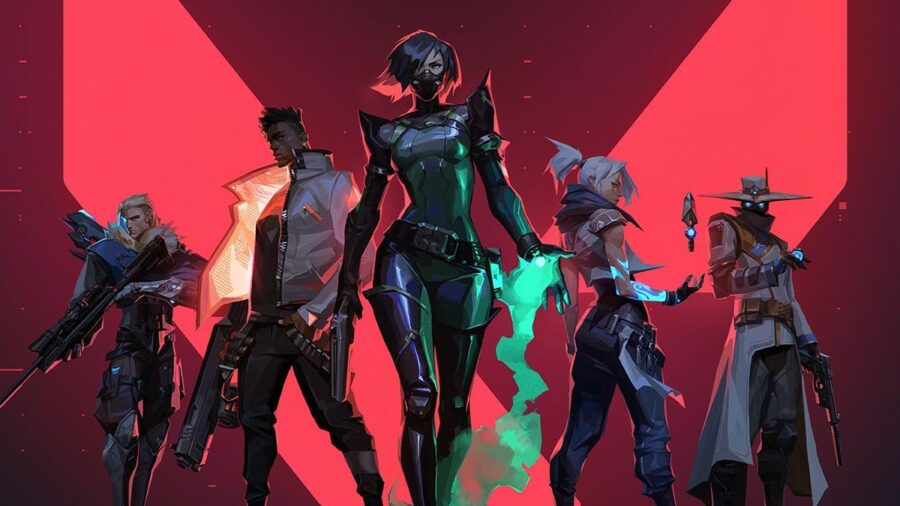 VALORANT has emerged as a major esport and taken the world by storm. It has the right combination of gunplay and abilities, and the maps are unique and challenging. No matter which character you choose or how great your gun skills are, the game also comes down to teamwork and coordination.

There are currently 13 agents in VALORANT, each with different skills and uses. You have to choose the right one to match your playing style and to complement the rest of the team. Some characters thrive on pushing opponents while others are more defensive. We’ve made a VALORANT character list with all the agents and abilities, so you can decide which is best for you.

Like in a sports team, every player in VALORANT has a different position to play in the team. These are called classes. The four classes in the game are Duelist, Initiator, Controller, and Sentinel.

Duelist
Duelists are the attacking players and the first ones to run into battle. They often have offensive abilities that deal high damage or blind enemies.

Initiator
Initiators set the groundwork for the Duelists to attack. Their abilities are often ranged and can destabilize or disorientate the enemies before the Duelists make their move.

Sentinel
Sentinels support the other players by blocking off areas or using their abilities to gather intelligence. A good Sentinel can often use their tools to lock down a site single-handedly.

Controller
Controllers are experts at blocking off areas to control the enemies’ movements. Their effectiveness relies on misdirection, and they often have ranged abilities that can work from across the map.

Every agent in VALORANT has two abilities they can purchase at the start of every round. There’s also a signature ability that charges up as they play. Lastly, each agent has an ultimate ability that gets charged by racking up kills and interacting with orbs. 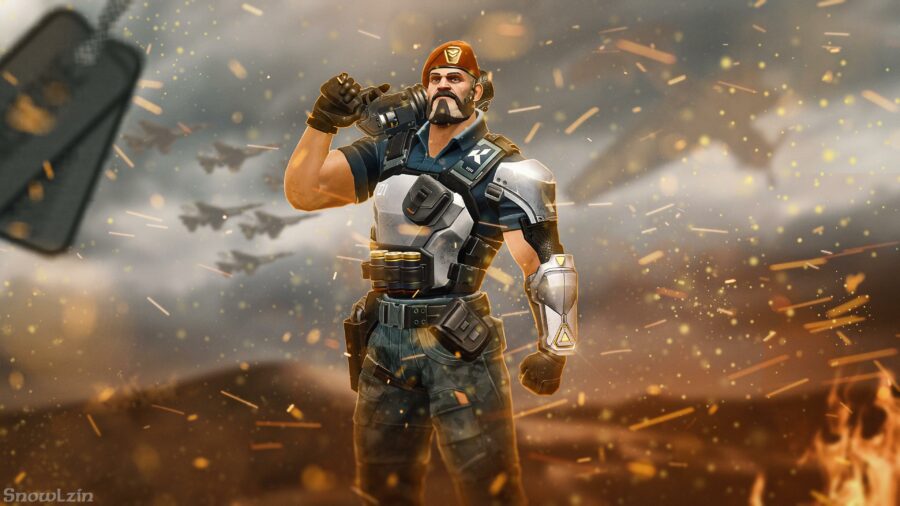 Stim Beacon
Stim Beacon creates a small zone that lasts for 12 seconds. Everyone in the zone gets a 15% increase in their fire rate, reload speed, and recoil recovery. The effects last for a few seconds after leaving the zone.

Incendiary
Brimstone fires a single incendiary grenade that creates a pool of fire on the ground. The grenade can bounce off walls or fire over them. It’s excellent for blocking off areas or damaging enemies behind cover.

Sky Smoke
This ability drops a cloud of smoke onto a particular area to block visibility for 14 seconds. You can have up to three at a time, and they are handy for stopping enemy pushes or slowing them down when defending. Since they are launched remotely they have a long range.

Orbital Strike
This ability brings down a targeted laser beam over a particular area for a duration of four seconds. The effects are devastating, and it can take down multiple enemies if they are in the area. It’s another remote-controlled ability that can be used from range. 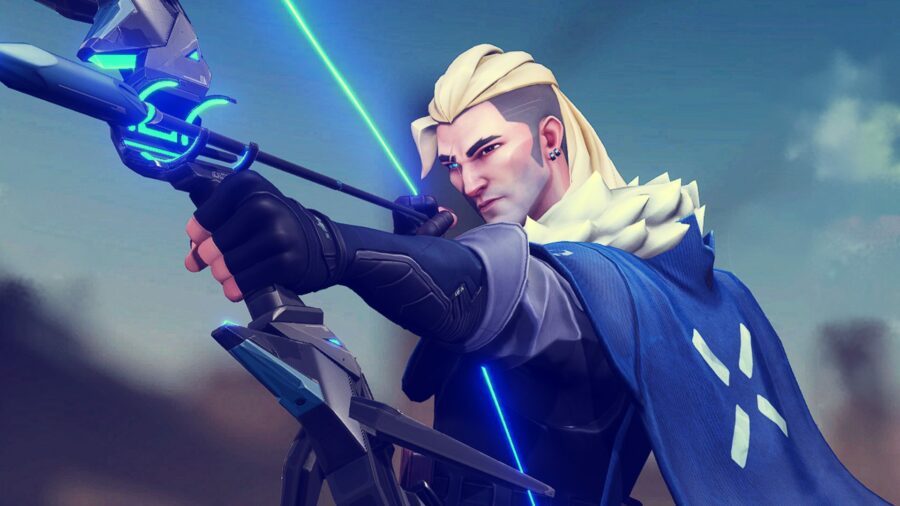 Shock Bolt
The shock bolt is a detonating arrow that can damage players in the area where it lands. You can adjust the range and set it to bounce up to two times before hitting your target.

Owl Drone
Owl Drone sends a remote-controlled recon drone to scout a location. The drone can also fire a tracking dart at an enemy to allow you to keep tabs on their location.

Recon Bolt
The Recon Bolt is similar to the Shock Bolt, but it emits a radar-like signal that detects any enemies in its line of sight. It also has a long range and bounces off walls.

Hunter’s Fury
Hunters Fury fires three energy blasts from your bow. The blasts are deadly can fire through walls from across the map. The energy blast also reveals nearby enemies so you can adjust your aim for the next shot. 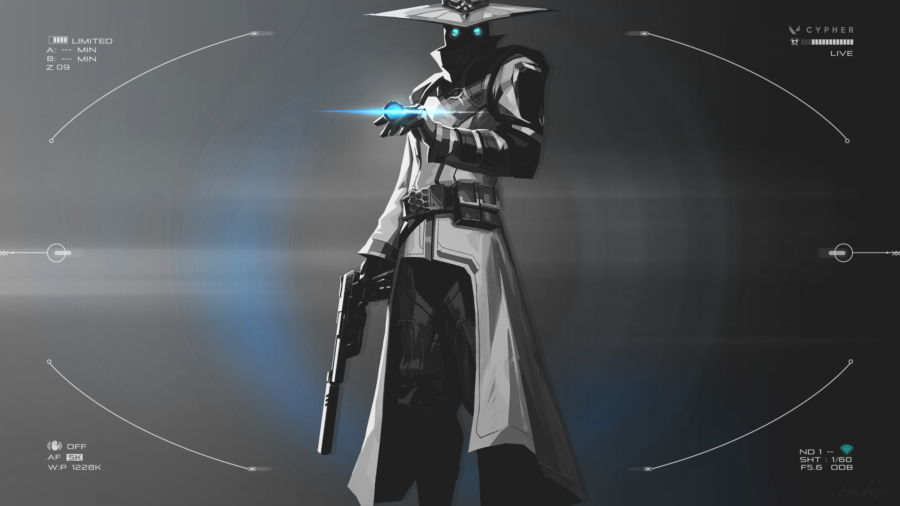 Trapwire
Trapwire places an invisible beam across an area. Any enemies who trigger it get dazed if they don’t destroy it in time, and it also shows their location.

Cyber Cage
Cyber Cage sets up a wall that blocks vision for seven seconds. It can be placed on any area of the map and activated remotely.

Spycam
The Skycam places a camera that Cypher can activate from anywhere on the map. It can be redeployed, but it can also get destroyed by enemy fire.

Neural Theft
Cypher throws down his hat when an opponent dies, and after a brief delay, it shows the location of the enemy team. 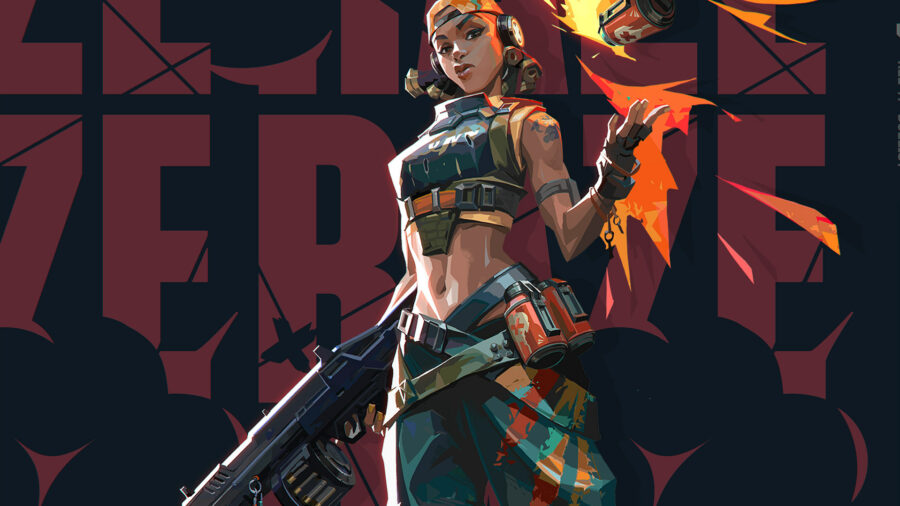 Boom Bot
The Boom Bot is a small wheeled robot that travels in a line and bounces off walls. When it detects an enemy, it targets them and explodes, causing heavy damage.

Blast Pack
The Blast Pack is s sticky bomb that can attach to surfaces. It detonates after a couple of seconds, damaging everything in the nearby area.

Paint Shells
Paint Shells is a grenade that explodes into smaller grenades that deal massive damage to anyone in the surrounding area.

Showstopper
Showstopper is a rocket launcher with a single shot after the fuse is lit. It has a very high blast radius and devastating damage. 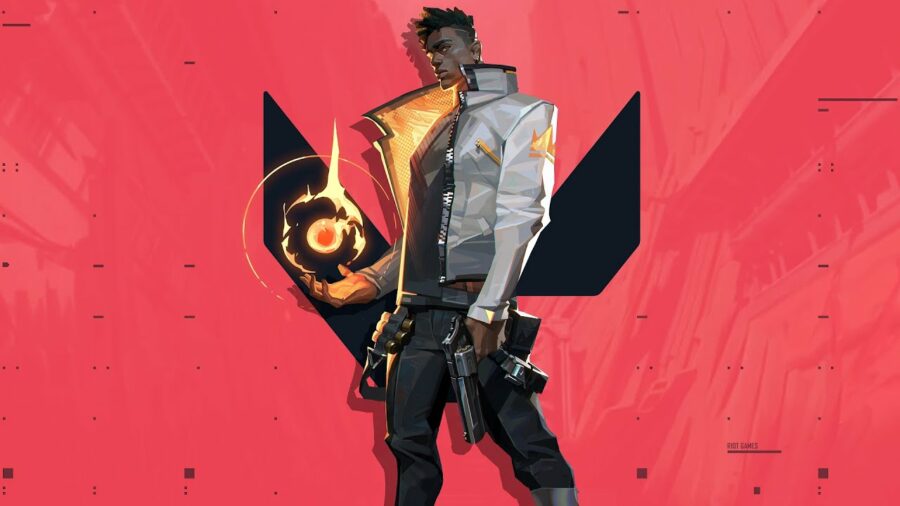 Blaze
Blaze puts up a flame wall that blocks the enemy’s sight and damages anyone who walks through it. You can bend the wall by using the fire button, and standing in the flames can heal Phoenix.

Curveball
This ability acts as a flash to blind enemies. It can only curve to the left or right and is perfect for throwing around corners.

Hot Hands
Hot Hands is a fireball you can throw to make a pool of flames on the ground. It lasts for four seconds and damages anyone who walks through it. Phoenix’s health gets some regeneration if he walks through it. 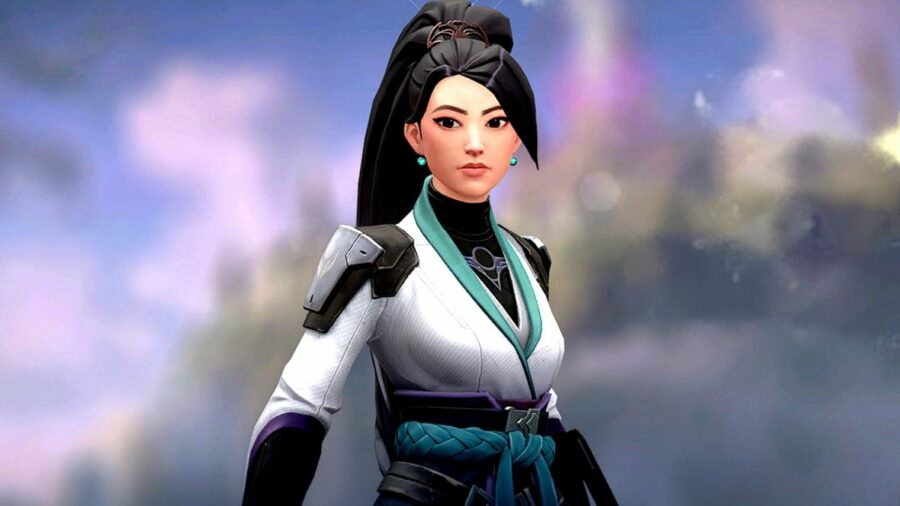 Barrier Orb
Barrier Orb creates a wall of ice that can be used to block off areas. The opposing team can break through it with enough effort, but they’ll give their position away.

Slow Orb
Slow Orb places a pool of ice on the ground to slow down anyone who walks through it. It only lasts for seven seconds, and it can slow down members of both teams.

Healing Orb
Healing Orb can be used to regenerate the health of Sage or her teammates during a round. It has a 45-second cooldown time and can only be used on teammates within line of sight.

Resurrection
This ability allows Sage to resurrect a dead teammate. It’s one of the most powerful ultimates in the game, but it takes a few seconds to work and can only be used on nearby teammates. 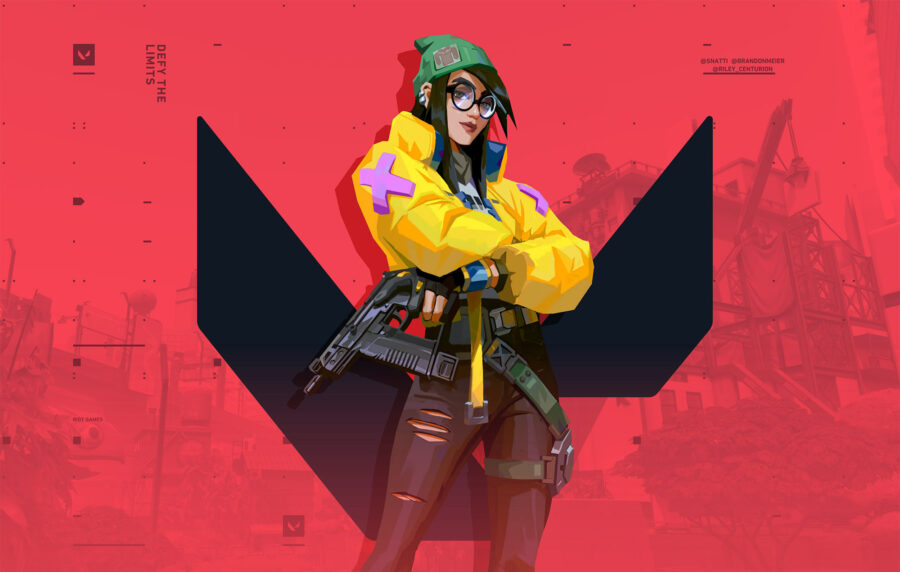 Alarmbot
Alarmbot is a tiny robot that attacks enemies in range and explodes. It can be redeployed but only works if Killjoy is within 40 meters of it.

Nanoswarm
This ability is a grenade that lands then goes into covert mode. Killjoy can activate it remotely to release nanobots that attack enemy players.

Turret
This ability deploys a turret that fires at enemies in its line of sight.  It can also be redeployed but only works when Killjoy is within 40 meters of it.

Lockdown
Lockdown has a large circular area and slows enemies down while stoping them from using their abilities or shooting for eight seconds. It has a long windup time, so enemies have a chance to get away from it. 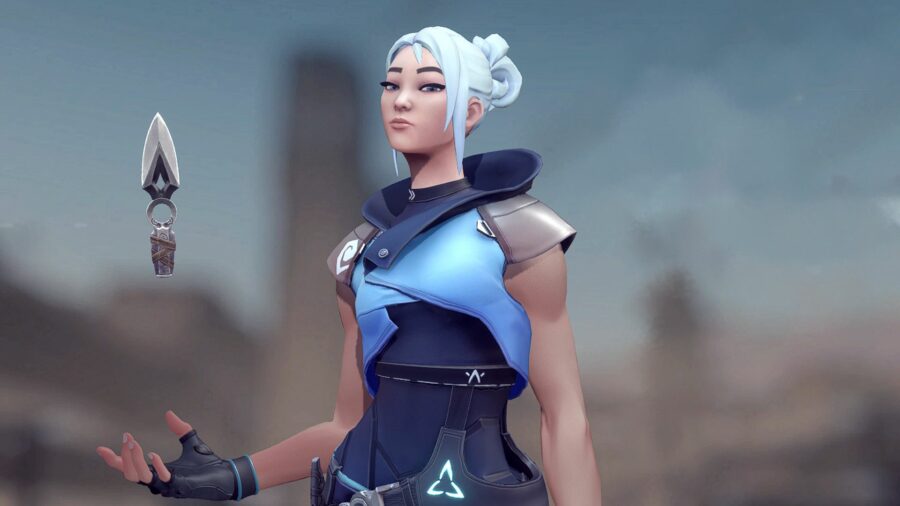 Cloudburst
Cloudburst throws a projectile that turns into a cloud upon impact to block enemy vision.

Updraft
Updraft causes a gust of wind that lifts Jett into the air to fly over walls or reach locations inaccessible to other agents.

Tailwind
Tailwind gives Jett a boost to propel her fast in whatever direction she’s moving.

Bladestorm
This ability equips five throwing knives that can be thrown individually or all together. They cause massive damage and kill with a headshot. Killing an enemy replenishes your knives. 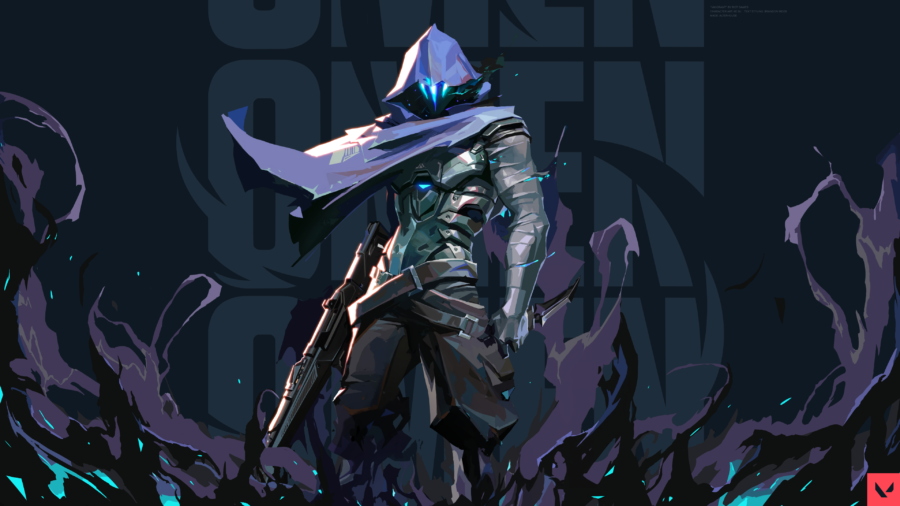 Shrouded Step
Shrouded step allows you to mark a location in your line of sight and teleport to it.

Paranoia
This ability sends out a shadow that blocks the sight of anyone who comes into contact with it.

Dark Cover
Dark cover sends out a large shadow sphere that blocks the enemies’ view. It can be targeted near or far using the alternate fire button.

From the Shadows
This ability equips a map, and Omen can teleport to any marked location. It takes a couple of seconds to active, and Omen is vulnerable during this time.] 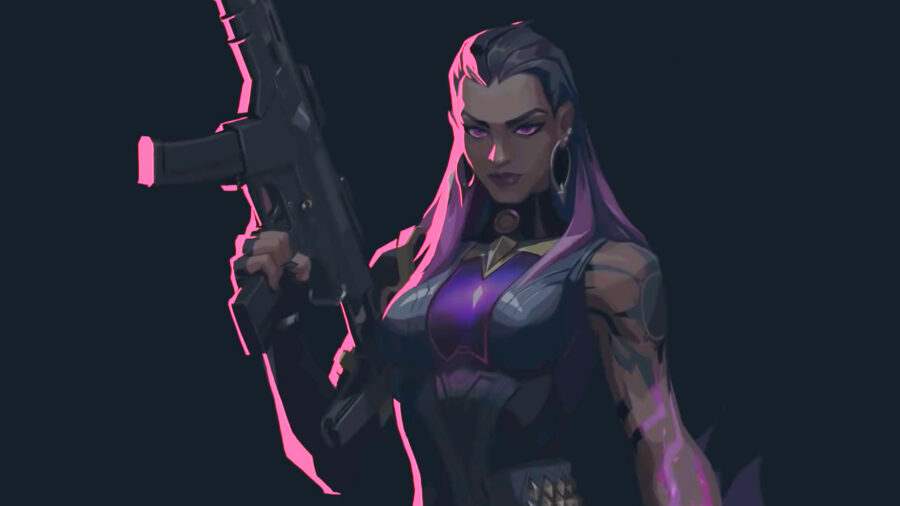 Leer
Leer launches a projectile called the ethereal eye that blinds any enemy who looks at it. It lasts for two seconds or until it gets shot down.

Devour
Many of Reyna’s abilities are tied to the kills she makes. Every kill harvests a Soul Orb that lasts for three seconds and can boost her abilities.  Devour consumes a Soul Orb and gives her rapid health regeneration. She can be overhealed up to 150 health, but her firing ability gets disabled for a second.

Empress
Empress puts Reyna in a frenzy for 30 seconds, and her reloading, firing, and equip speeds are all increased by 15%. Killing an enemy increases the duration, and she can also use Dismiss during this time. 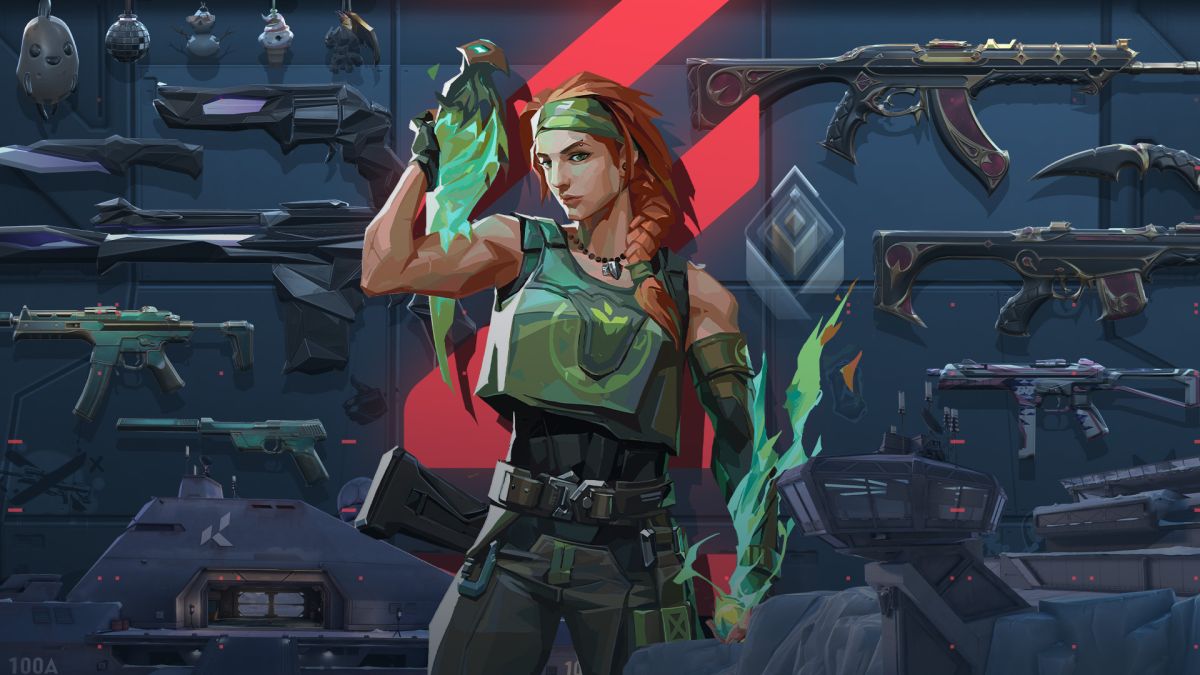 Regrowth
This ability can heal Skye’s allies in and out of her line of sight. She can use it until her healing runs out, but she can’t heal herself.

Trailblazer
Skye equips a Tasmanian tiger that she can control. She can use it to attack enemies and damage them with a concussive blast.

Guiding Light
Guiding Light equips a hawk trinket that she can guide in the direction of her crosshair. She uses it like a flash to blind the enemy team.

Seekers
This ability sends out three seekers that home in on the nearest three enemies and blinds them. 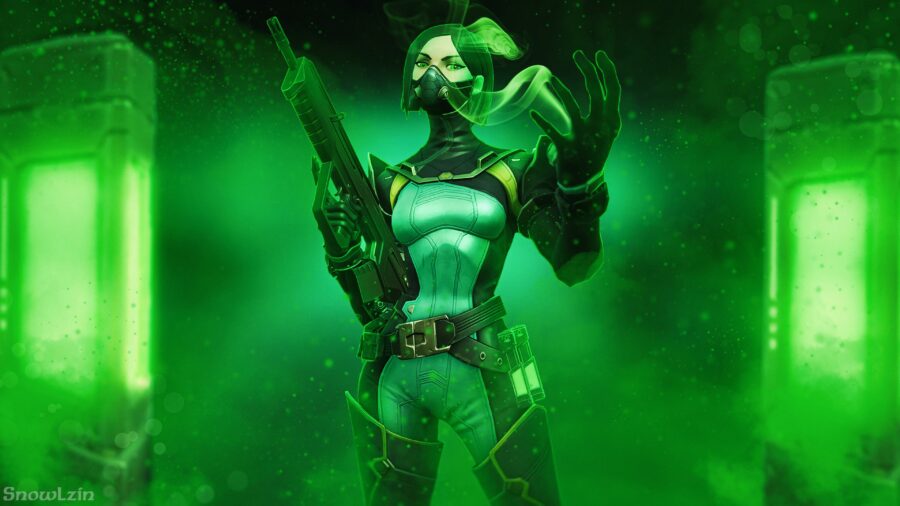 Snake Bite
Snakebite creates a pool of acid that damages enemies and leaves them vulnerable to damage. It lasts for eight seconds, and enemies are vulnerable for two seconds after leaving.

Poison Cloud
Some of Viper’s abilities are tied to how much fuel she has. Poison Cloud deploys an emitter that creates a toxic cloud that drains enemy health and blocks their view. The emitter can be redeployed and reused during a round.

Toxic Screen
Toxic Screen deploys emitters that create a poisonous wall that blocks the line of sight and damages enemies who walk through it. The wall can be deployed remotely or reused but only works until the fuel runs out.

Viper’s Pit
This ability creates a massive toxic cloud that reduces the health and vision of any enemies within it. This ability lasts as long as Viper is inside it or if she keeps refueling it. 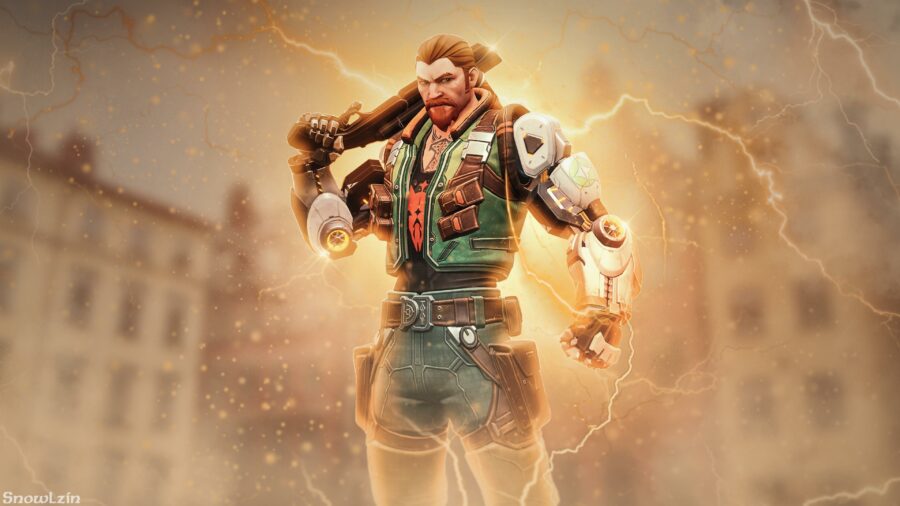 Aftershock
This ability sends a fusion charge through a wall damaging anyone hiding behind it.

Flashpoint
Flashpoint sends a charge through a wall blinding any enemies who look at it.

Fault Line
Faultline sends a seismic blast in a straight line. Anyone caught in its effects gets disorientated, leaving them vulnerable.

Rolling Thunder
This ability sends out a cone-shaped seismic blast, dazing enemies and knocking them off balance.

If you don't have the game, find out how to download it here.

How does the Valorant Ranked System work?

How to Change Your Name in Valorant

Valorant: How to Fix All Error Codes