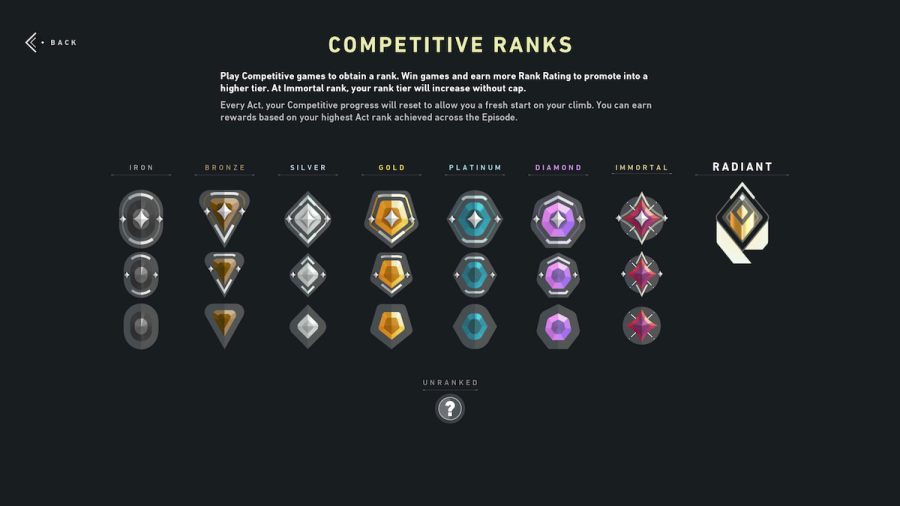 Valorant is currently in Episode 3 Act 3, and the ranking system is primarily divided into eight Competitive Ranks. Most of the ranks are subdivided into three tiers and named after rare Earth elements to signify the skill progression for every player. The final rank is Radiant; it consists of only one tier and has the top players across every region.

The ranked mode will not unlock for new players, as they will have to play a minimum of 10 matches in Unrated mode. The initial rank for a player is from where the ranked grind starts in VALORANT. The first ten matches are to assess the skill levels of every player.

All Ranks In VALORANT

VALORANT uses a Match Making Rating (MMR) system to target a player's performance skill level. The developers describe the MMR as a ladder, where victories are earned by pushing others down. It can be fairly difficult to grasp but consider the Rank to be a part of this ladder, where continuous victories will help players to progress quickly. Here are all the ranked divisions in VALORANT:

Related: How to Mark a location in Valorant

Every rank till Immortal has three subdivisions, and to progress from each division, players have to earn 100 RR (Rank Rating). If a player is inactive for over two weeks, their rank gets hidden. However, this is nothing to worry about as one will not derank due to absence. The rank gets revealed as soon as the player plays a match in competitive mode!

For more information about Fortnite such as news and guides, be sure to check out our Valorant Homepage on Pro Game Guides!