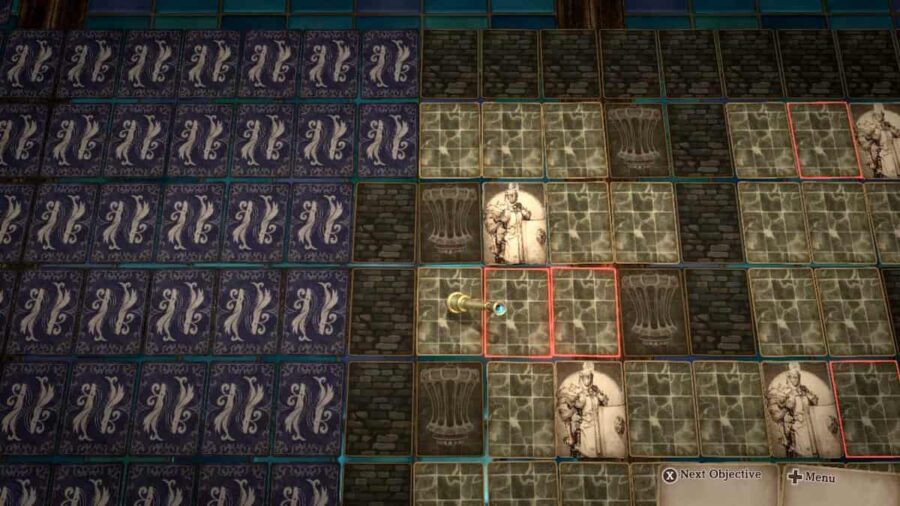 Out on the North Isle is Alabaster City, home of the Ivory Order and all things white. Beneath it lies the Foundation, a school where Ivory Maidens are educated to become the next savior of the island. To get to the last room, you need to sneak past patrolling guards. They move whenever you do.

Perhaps the most frustrating ones are those in B4. There are five members of the Ivory Order, and the last two barely give you any room to move. Fortunately, you just need to know their blind spots, then it's a cheese!

The blind spots of the two leftmost guards are very obviously the spaces between the cages.

The only Ivory Order member whose blind spot you don't have to worry about is the one at the bottom. They patrol eight spaces in a clockwise/counter-clockwise pattern, so the chances of bumping into them are low.

Related: Where is the shipwreck surrounded by cliffs in the western sea? – Voice of Cards: The Forsaken Maiden

Then, whenever you reach a blind spot, stay there and repeatedly tap the same space to keep the guards moving. Once they’re out of the way, move into the empty space and push forward. Now go out there and save Lanca!

How to get past all the Foundation guards on the last floor in Voice of Cards: The Forsaken Maiden