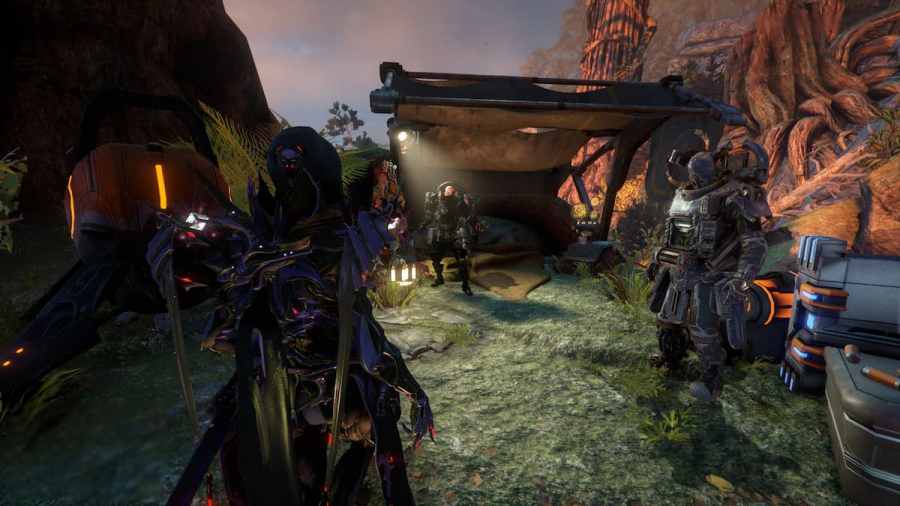 First, Echoes of the Veilbreaker comes with the much-needed rework of Ven'kra Tel and Sprag bosses from Kahl's Garrison missions. These bosses were not well received in their first iteration, so it is a welcomed change. Ven'kra Tel can now be encountered and defeated during Kahl's Prison Break mission, while Sprag stalks Kahl in the Junk Run mission.

There has also been a host of new cosmetics added in this update. Styanax gets his first alternative helmet, the Geroustic Helmet, for purchase from the in-game Market. If Dojo decorations are your thing, a slew of new Ostron theme decorations has been added, including a new Ostron-themed tile set for a room.

Chipper, Kahl's not-all-there buddy, also has new offers for eager Tenno to purchase for stock. You can buy a new landing craft called the Skaut from him. It is a sweet Grinner Bolker repurposed for Tenno occupation. Chipper is also now selling two new blueprints for Archon Shard-themed Ephemeras, the Shard Hex, and Shard Bane Ephemeras.

To the surprising excitement of many, the Drifter can now be properly customized! You can now equip Warframe-based attachments and armor along with the usual accessories. Unfortunately, operator-based cosmetics still seem absent, but here's hoping Digital Extremes makes the jump for those soon.

Kahl himself has also gained a bit on the cosmetic side of things, gaining access to his own Captura photo shoot and booth for your screenshotting pleasure.

Changes and Additions to Kahl's Garrison

One of the biggest, if not the biggest, changes in this update is how Kahl's Break Narmar challenges functionally work. Before, you had to complete a challenge all in one go, in one mission run. However, as of the Echoes of the Veilbreaker update, challenge progress now persists between runs rather than being reset. This makes completing Kahl's challenges for that valuable stock resource substantially easier to manage. Speaking of challenges, a helping of new challenges have been added to the potential pool:

For more up-to-date content on Warframe, check out our guide on How to get all Revenant Prime Relics in Warframe here on Pro Game Guides.