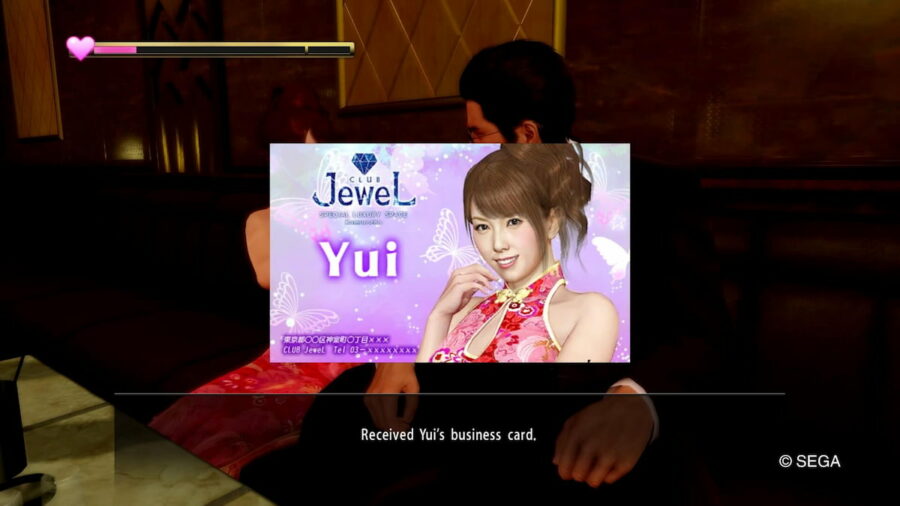 Yui Hatano is the hostess at Club Jewel in Yakuza Kiwami. Her self introduction may come off as a bit standoffish but she can quickly warm to Kiryu when given the chance. Cabaret clubs can be expensive so it's recommended to have some cash to spare when spending time there.

Upon meeting Yui after being escorted to Club Jewel from the MEB, players will have a choice to talk, give gifts, and order drinks or food. Maxing out Yui's affection to S Rank shouldn't take much time at all when offering the correct responses but to speed up the process, it's important to know what she likes.

When talking with Yui she will have many topics of conversation that will begin to recycle once answering them all at some point. These are the responses that will yield the best results.

Upon first meeting Yui and every subsequent visit after rank up, Kiryu will be asked a series of questions from her. These questions won't be right after another and will only be asked once ranking up. These are the responses in order for maximum affection. Responses that yield that same result have been omitted.

Aside from the questions, Yui will ask between ranks, what she decides to talk about can be in any order. Here is every topic and the response that yields the most affection.

Players searching for the hostess-related trophies and achievements will have no problem asking Yui out. Beat her in Mahjong and that's another trophy/achievement in the bag. There is also fun to be had with Karaoke and once her Substory is finished, her affection will be maxed out. If the Completion List entry doesn't display this, simply go back to the club and after a date, her rank should rise to S.