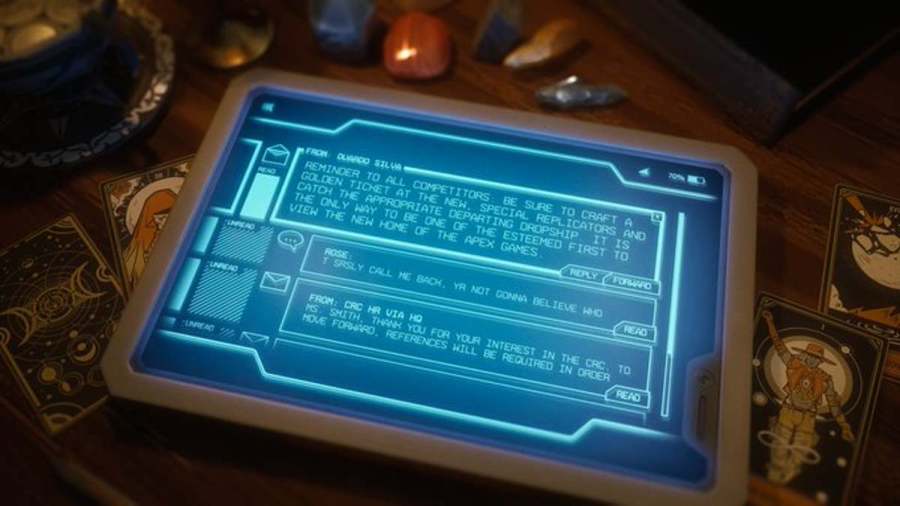 Respawn Entertainment shared an image on Twitter, teasing the Season 15 map and revealing more on the Golden Tickets. Players can obtain Golden Tickets in battle royale matches by crafting them at a Gold Replicator. The tickets are an invitation to a teaser on what seems to be the next map in Apex Legends. The image released sheds more light on this and further solidifies that Boreas will be the Season 15 map.

The image released is a message on tablet with several messages, the first notably from Duardo Silva, leader of Silva Pharmaceuticals. The message reads: "Reminder to all competitors: Be sure to craft a Golden Ticket at the new, special replicators and catch the appropriate departing dropship. It is the only way to be one of the esteemed first to view the new home of the Apex Games."

The responses are a little more mysterious. Someone named Rose texts T to call her back, and what appears to be an HR rep messages Ms. Smith about her interest in CRC. The CRC seems to be the Cleo Recovery Council, the entity trying to recover from the destruction of Cleo, one of Boreas' moons.

The message from Silva promotes getting Golden Tickets, which are used to get a preview of the new world, expected on Oct. 19. The other messages remain a mystery, building lore that will soon be discovered in Season 15. Fans speculate that Ms. Smith could be the Season 15 legend, rumored to be named Catalyst.

Players can grab the Golden Tickets to find out more about the next map and potentially more information about what is happening on Boreas. The planet of Boreas is home to Seer, and Duardo Silva is the name of Octane's father. It is believed that his grandfather, Torres Silva is posing as Duardo as he runs Silva Pharmaceuticals.