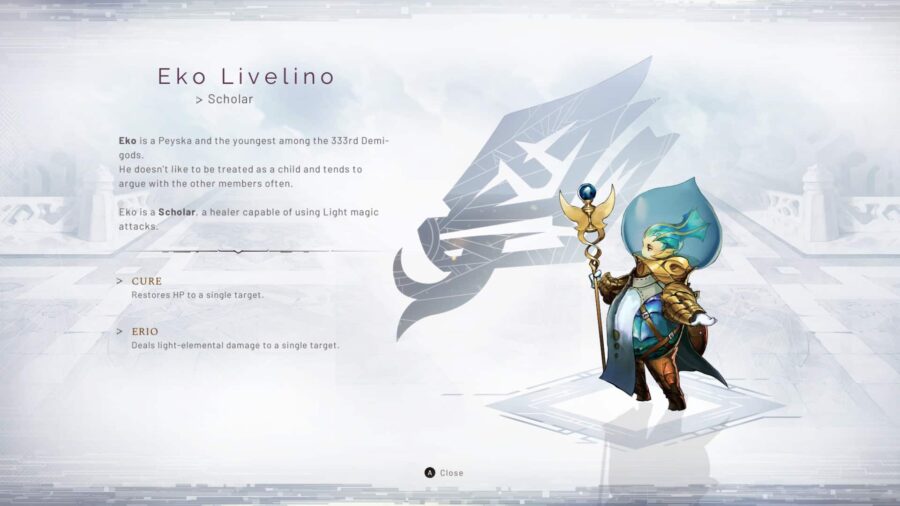 In Astria Ascending, you can build your characters how you want, but there is no respec option. Whatever choices you make are set in stone. You can grind more SP if you choose a skill early in the game that ends up being potentially useless, but you cannot change your jobs after choosing.

Eko is the main healer in Astria. He may not be the most likable character, but it's hard not to have him in your team at all times. Not only can he heal, he has access to Light magic, which is also essential.

Do take note. You do need to take a fair few Support Star Nodes so that you can equip plenty of passives. If you don't, you'll nerf yourself as you progress through the game.

Eko's main job is to keep your party members alive. Each turn, Eko's function should be to heal. If everyone is okay and the enemy is weak to Light magic, use Erio to light magic to deal damage. Once a support job is acquired, knowing a few buffs will go a long way if you're against a boss who is resistant or absorbs light attacks.

As a healer, you need a lot of MP, but luckily, with a few skills such as blossom, you'll regenerate MP each turn, and, likely, you'll never run out of MP. Magic increase is next, as the more magic, the more health restored and damage is done to enemies.

HP is grand for survivability. Having a healer get one shot is something you don't want to happen, but having Auto-Raise counters that, at least once. Now, some people may suggest Agility so that the healer can always go first, so they can instantly heal the next turn. But we suggest not.

Healers are handy going last as well, so they can heal the damage that was done that turn and remove any status effects on allies straight away.

How to fix Astria Ascending not working on Xbox

All Characters and their Voice Actors in Astria Ascending

What is the release date for Astria Ascending?