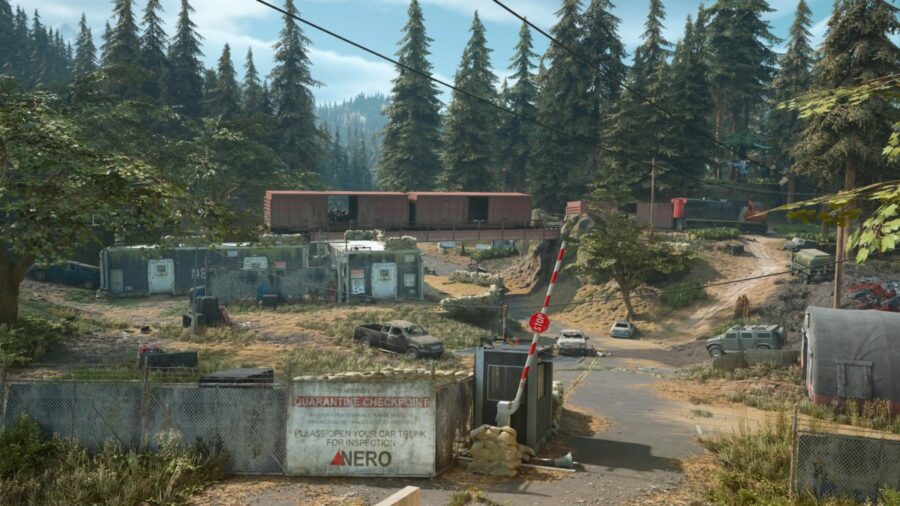 Days Gone has a big open-world to explore, and with that come collectibles and trophies. Sometimes, however, with such a big map some locations become hard to find. So, today we're going to show you all of the places to find the Nero Checkpoints.

Some of these locations will naturally have Freakers crawling all over them, so always be prepared with the some fire power when on the hunt for new checkpoints. In the case of nests you will definitely need Molotov Cocktails, or some form of explosives. Never underestimate the power of fire and a big bang!

Also: watch out for the alarm systems on the tops of the facilities. Look for speakers on poles as well as on the sides of the buildings and make sure to shoot them down before powering on the facility, otherwise you're just asking for an invasion!

This part of the map won't be accessible until later on in the game's narrative. After doing some missions in the Crater Lake region, you will go on a Mandatory mission with Sarah which will unlock the location in the Highway 97 region. After this the gate will be open and you will be able to venture further into the back of the campus where you will find the checkpoint.

As with all checkpoints you will need to find fuel (and sometimes a fuse). Fuel will be laying around in multiple locations but here is can be found under a Wooden Roof outside the Nero post. The Fuse will be in one of the Military Tents, clues will lead you to it once you have found the fuse box.

You will find Horse Lake Checkpoint in the Cascade region. To be able to gain access you will need to find something to climb on. Go behind the Nero structure and you will find a car upon a Hill which you can push down (press Square to do this). This will then serve as a stepping block to get into the facility via the rooftop. Fuel will be on the other side of the fence where you pushed the car, put this in the generator and you're good to go!

The Iron Butte Pass Checkpoint will be found within the Belknap region. Make sure to have some scrap handy on you, as you will need to Repair the generator before you can put the fuel in. Fuel will be found to the left of the trash heap.

This is another checkpoint found in the Cascade region, and is actually imperative to the beginning of the story. In one of the first story missions, Bugged the Hell Out, you will need to head over there. Fuel here can be found behind the Truck that is being repaired, fill the generator up and the doors will open for the facility.

Another Nero Checkpoint found in Belknap, this location will need both Fuel and a Fuse. Find fuel on the back of the Military Truck, and the fuse will be found after heading to the Blue Search Perimeter on the map. After interacting with the closed doors the game will provide clues to find the fuse which is near the Tunnel Entrance.

This one is in the Cascade region of the map. For this area you will need to take out some Freakers. You will see them feeding as you enter the cemetery, and they are conveniently right on top of the fuel canister that is needed to refill the generator. Once you have taken them out you can take the canister and power up the facility.

This one will be found in the Lost Lake region (a game favorite of ours). Look for the generator which is between some big rocks, and you can find the Fuel for this bad boy in some Tents to the righthand side. A pretty easy one all things considered.

In the daytime you should be able to get in and out of here quite easily if you're quiet. There are some Freakers but they are not too hard to take care of. Just make sure not to venture too far in or cause too much noise otherwise you will awake a nearby nest!

This is another one that is for a bit later on in the game as it is out by Highway 97. Run around the fenced area to gain access to the generator, Fuel will be found near the Security Outpost at the site.

Another one that is found in the Lost Lake area. The generator will be at the opposite end of the Nero building, and you will be able to obtain Fuel from the back of an SUV out front.

This one is also in the Lost Lake region, but will need a bit more action to be taken before you can get inside. Head towards the Dark Tunnel and Deacon should start remarking that he can smell a nest nearby. You will need to burn out the infestation inside as that is where the fuse for the checkpoint is.

Pop the fuse in the fuse box, and then head towards the Tent where you will find some Fuel inside. Head round the back of the building and climb up to fuel the generator.

Found in the Crater Lake region, you will encounter the Fuel on the righthand side after going into the Camp. The Fuse will be in a box up on the Hill, but the game will provide clues after analysing the fuse box.

And last but not least this checkpoint is also in the Crater Lake region of the map. Head towards the Yellow School Bus and head behind to find some Fuel, then take it inside a fenced off area near the facility, that is where you will find the generator.

There are all the NERO Checkpoints for you to go and explore! These are by no means the only places you need to visit to get collectibles in the game, but they are a start at least!

Need more help with the game? Why not check out the horde locations for Days Gone?