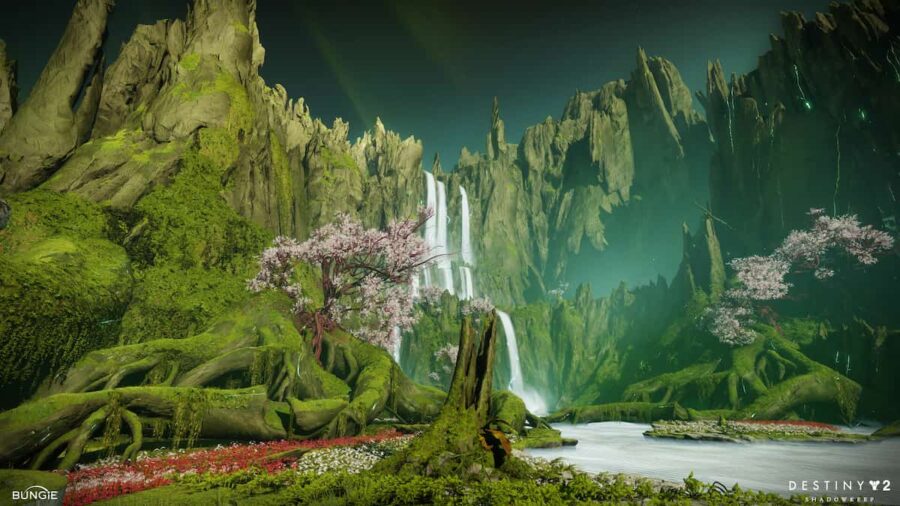 Garden of Salvation is a raid released in the Shadowkeep expansion, allowing players to explore the verdant fields of the Black Garden. The raid is launched on the Moon, although the actual location exists outside of time in an unknown area. The Sol Divisive forces guard the Black Garden, but what are they protecting? Here's all we know about the Garden of Salvation.

The Garden of Salvation in Destiny 2, explained

What is the backstory of the Garden of Salvation?

In the lore entry "Legend: The Black Garden," Pujari describes the visions she experiences in the Black Garden. "The Garden grows in both directions. It grows into tomorrow and yesterday. The red flowers bloom forever." According to Pujari, the Garden transcends time limits, expanding in both timeline directions.

She explains the existence of gardeners, presumably Vex, who tend to the land's vast fields and rivers. In her vision, she discovers a Ghost-shaped flower in the Garden. The flower's thorn strikes her upon reaching down to pluck it. She bled, but it was not natural blood. It was Light.

The Ghost-shaped flower speaks to her, saying, "you are a dead thing made by a dead power in the shape of the dead. All you will ever do is kill. You do not belong here. This is a place of life." Pujari is confused because the Traveler is life, the Traveler has always been life. She responds, "the Traveler is life, I said. You are a creature of Darkness. You seek to deceive me."

Pujari looks behind her, glancing at the eternal blooms of the Garden. They seem to extend forever, along with the rivers of thought and the peaceful gardeners. 'It is impossible for Darkness to be this beautiful,' she thinks. She feels doubt. When her Ghost resurrects her, plucking her from the vision, there is a thorn cut in her hand. "It has not healed since."

What is the Garden of Salvation?

Although the raid is named Garden of Salvation, the activity takes place in the Black Garden. Even so, the Black Garden could be called a garden of salvation due to the parallels to the Garden of Eden. The motivations of the Vex are to return the world to Eden, back to a clean slate where they can exist eternally.

After Guardians kill the Black Heart in the Garden of Salvation raid, the Undying Mind Vex attempts to resurrect the heart. To protect this process, the Vex seek to seal the Black Garden and prevent entry. However, the Guardians intervene in time to prevent this event. It seems as if the Vex's primary goal since the death of their god is resurrecting it.

Why is the Garden of Salvation raid important?

The Garden of Salvation raid allows six players to enter the very heart of the Vex's home. Despite their violent methods of defeating humanity, it is fascinating that the temple to their god is so peaceful. It is clear why they seek to protect a garden that grows "in both directions" where "the red flowers bloom forever."

The beautiful landscapes in this raid took our breath away. For beings who can create basically anything, it's interesting that this is what they chose. No capital, no fortress, but a garden. It almost makes us sympathize with the Vex and their mission to convert the world back to Eden. Of course, eliminating humanity is less than optimal, but we can work with that. The Garden of Salvation raid is a rare chance to understand the motivations of the Vex and witness the god they protect so dearly.

What is the Garden of Salvation? – Destiny 2 Raid Lore