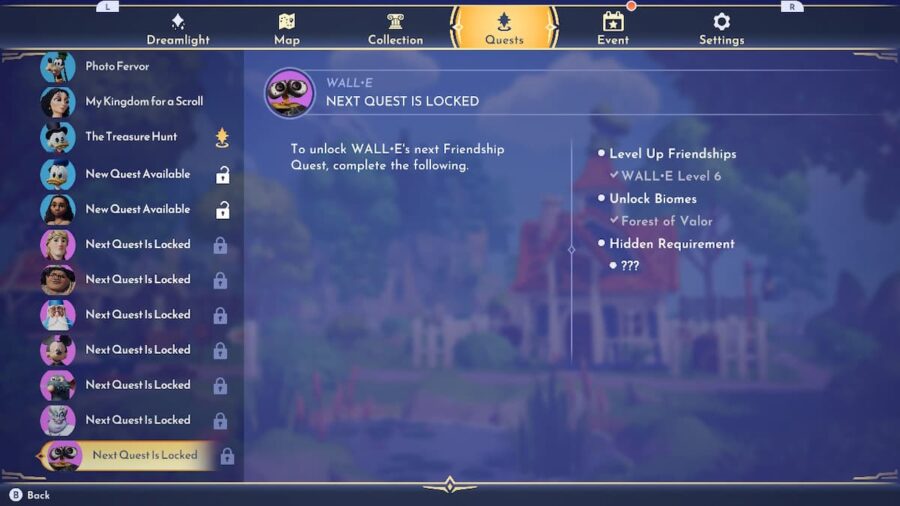 As you start to progress through WALL-E's questline in Disney Dreamlight Valley, you may eventually hit a wall (pun definitely intended). To start the quest Broken Memory, you'll need to raise WALL-E's friendship level to six, unlock the Forest of Valor Biome, and complete a Hidden Requirement. What is that Hidden Requirement? Read on and find out.

Related: Can you build more chests in Disney Dreamlight Valley?

After you've met the first two requirements to unlock Broken Memory, clear as many small night thorns as possible. Eventually, you should find electronic components in a green memory orb as seen above. Pick it up, then go back and talk to WALL-E about it to begin the quest.

Give WALL-E the electronic components, then follow him back to his house to find a broken machine near the black cubbies on the left hand side. It's the machine you found in a garbage cube in his earlier quest The Compressed Garbage Incident. Go back to WALL-E's realm and dig around until you find a second electronic component. Bring that back to him. Now all you need is tinkering parts. Go to your crafting table with 40 Iron Ore and eight Coal Ores to craft the 12 tinkering parts you need. Then, use those tinkering parts to craft F02937 M3 N07. Give the repaired machine back to WALL-E to complete the quest.