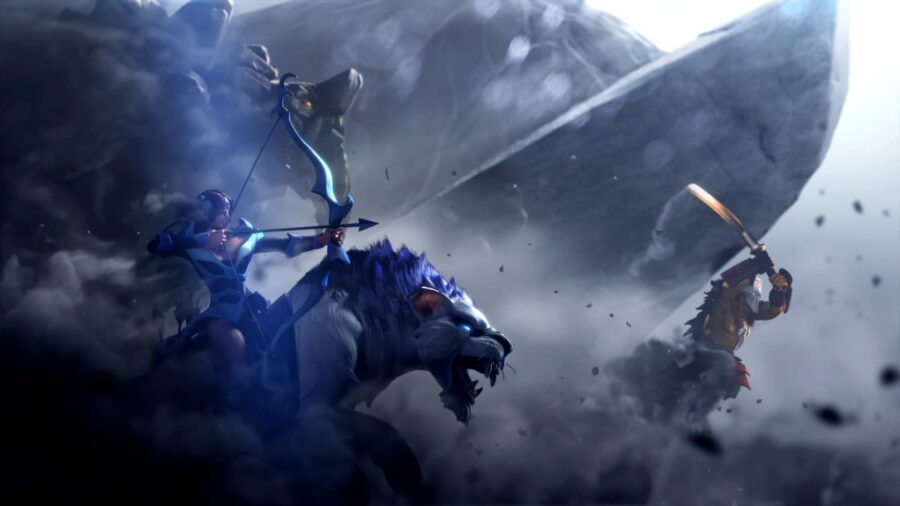 In Dota 2, there’s a ranking system for ranked matches. The ranking system is designed to represent a player’s skill level each season. The game will place you with equally ranked players, and if you’re able to beat them consistently, you’ll rise in ranks until you achieve a roughly equal level of skill with those whom you’re playing with.

You must have played 100 hours of regular matchmade games in Dota 2 to play ranked matches. As a game can last between roughly 20 minutes to 40 minutes, this equates to playing in the region of 200 Dota games.

After this, there’s a brief calibration period, during which you’ll be Unranked. The game will put you in games with an estimated MMR, and rate your performance. If you win a lot, your initial rank will be higher. If you lose a lot, you’ll likely start in Herald.

This amount will change depending on the level of games you play. For example, if you win a lot of games in a row, the system may boost your MMR to rocket you out of that rank quickly. This is because the system thinks you’re too good for the rank you’re in and wants to test that against higher-ranked players.

What are the Dota 2 Ranks?

There are eight ranks in Dota 2 beyond Unranked. These are Herald, Guardian, Crusader, Archon, Legend, Ancient, Divine, and Immortal. Each of these, apart from Immortal, has five tiers, ranked one to five. There is around a 500 to 600 MMR difference between the first tier of a rank and the final. For example, Guardian 1 is around 600 MMR, while Guardian 5 is closer to 1200.

The exact MMR ratings for each rank varies based on server population, overall skill, and other factors. Below are the approximate MMR ratings:

Immortal Rank is only obtained by reaching the leaderboards for each region. Once you achieve a rank on the leaderboard, you’ll gain a different symbol, depending on your ranking

The best way to rank up in Dota 2 is just by playing the game and consciously learning from your mistakes. Try to focus on your own gameplay rather than other people, and play as perfectly as you can. Limiting your own personal mistakes is the best way to win.

Maining certain heroes and roles will definitely help you, though. Dota 2 is a very deep game with hundreds of heroes and thousands of potential interactions. Being able to focus on one or two heroes and a single role will enable you to learn much quicker. It’s a perfect alternative to wading into the game and trying to learn everything at once.

And while on paper, queuing in a party makes ranking harder (you will gain less MMR overall), the added advantage from queuing with people you know makes up for it.