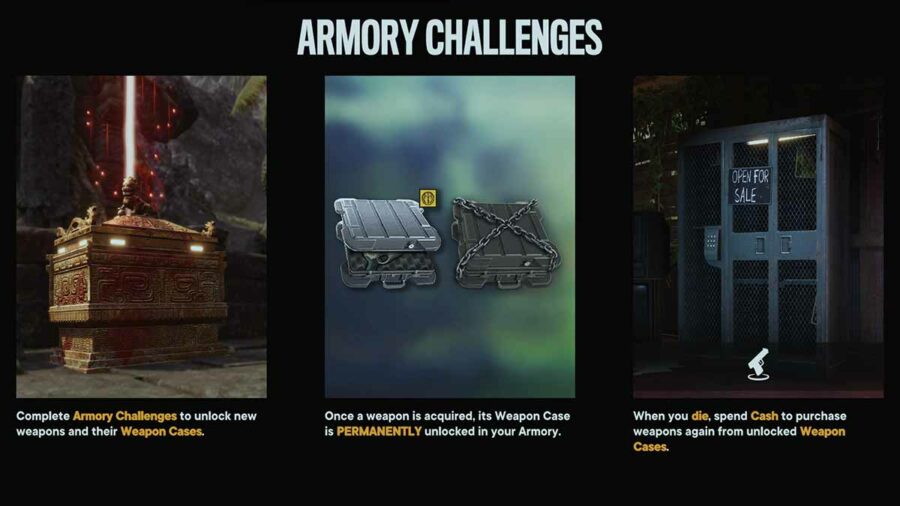 Players start off with a 1911 Pistol in the Vaas: Insanity story mission. Since this secondary weapon isn't enough for boss fights and harder difficulty levels, the game gives you several other weapons to play with. You can select from a total of nine weapons, including the 1911 pistol.

In order to get these weapons, you'll have to earn them by completing Armory Challenges scattered across the map in various Weapon Temples as shown in the image below. These are depicted by the lock and key symbol.

Here's a list of all eight Armory Challenges and the Weapon Cases as seen in the Vaas DLC map:

All of these challenges have the same objective i.e., to eliminate specific amount of enemies. The higher the difficulty, the more enemies you have to kill. So it's advisable to collect cash and upgrade your existing weapon first before going for higher difficulty missions.

Successfully completing these missions will unlock specific Weapon Cases. You can then access and upgrade said weapon from the safehouse. You can complete the Armory Challenge for whatever weapon you want to unlock and try first.

Although some guns are just better than others, such as the SBS Shotgun, you can't go wrong with any weapon once you upgrade it. In case you die during a mission, the weapons, cash, and other items you are carrying will be lost. However, your weapon upgrades remain intact.

Stay tuned to Pro Game Guides for more Far Cry 6 and Vaas: Insanity DLC content. In the meantime, head over to our article – All Vehicle Pickup Points in Far Cry 6.