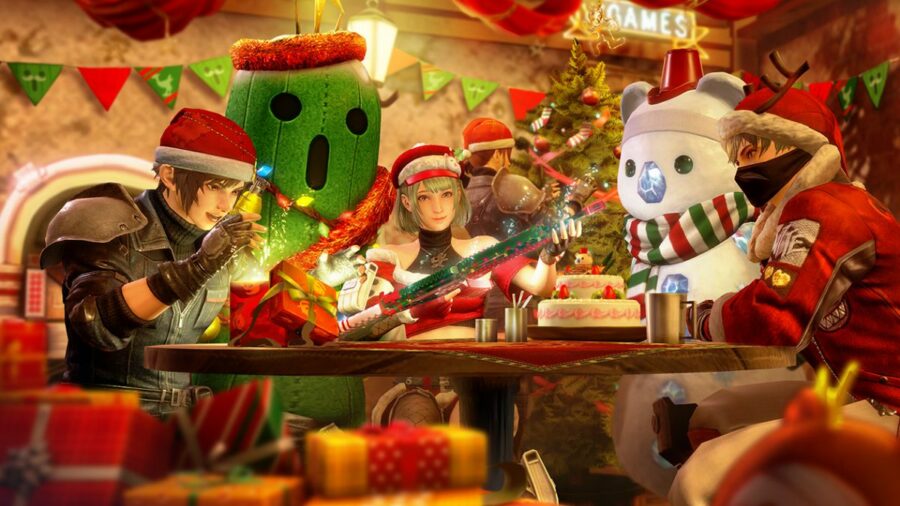 Square Enix plans to continue supporting its hit Final Fantasy VII Remake mobile spin-off, The First Soldier. The company announced that the Holidays are coming to Midgar, and a special event will be coming to the game to celebrate.

The announcement doesn't go into too many details of what the Holiday Event will contain. The event will feature several holiday-exclusive challenges and some "festive" rewards. Some of the locations around the main maps will also be transformed to be more holiday-themed.

Related: Should you fight monsters in Final Fantasy VII: The First Soldier

An image of the new Holiday event was also shared, teasing what players can expect for the event. The tease shows two people in Holiday costume versions of a Cactuar and Moogle sitting with a group of normal player Avatars. The normal Avatars are simply wearing Santa-themed outfits, and there's a Christmas tree in the back. One of the Avatars is opening a gift, possibly suggesting wrapped gifts will be coming to the game.

The First Soldier is a Battle Royale game for mobile devices that takes place years before the events of Final Fantasy VII. The game proved popular at launch, with it the game not being able to handle all the players trying to download it, the instant became available.

For more things on all things Final Fantasy, including How Long is Final Fantasy XIV before Endwalker?, keep reading on Pro Game Guides.

How to get the Optimus Omicron Minion in Final Fantasy XIV: Endwalker

How to get the Calydontis mount in Final Fantasy XIV Endwalker