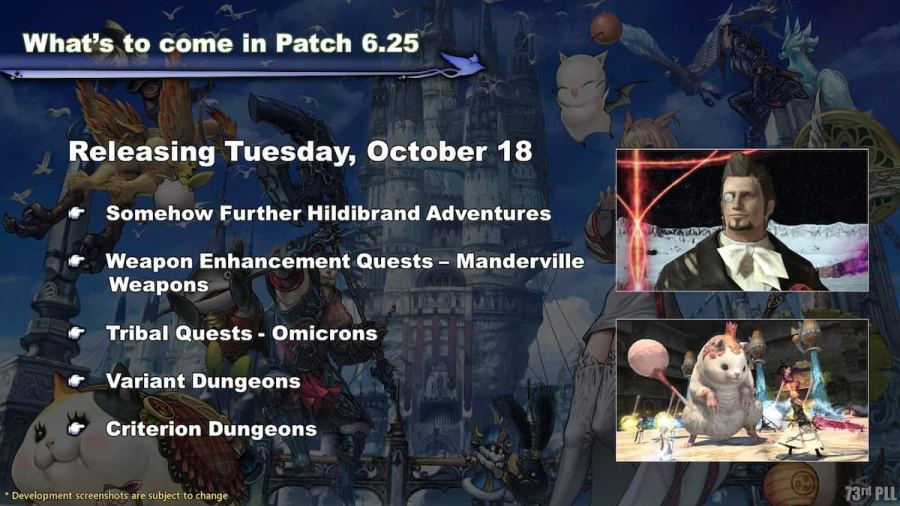 Final Fantasy XIV’s next major patch release date has been announced, as FFXIV update 6.25 releases on October 18. The date was announced during the 14-hour live stream event on YouTube.

Patch 6.25 will feature huge amounts of new content, including new Relic Weapon-style Weapon Enhancement quests, “Somehow Further Hildibrand Adventures,” Tribal Quests for the Omicrons, and the release of Variant and Criterion Dungeons. Almost all of these additions were already detailed in past Live Letter streams, or documented on the 6.2 patch Special Site.

Related: How to get the Wind-Up Ragnarok minion in Final Fantasy XIV

This will effectively be the final part of the huge 6.2 update which has seen dozens of features and additions to the game, from the Island Sanctuary, to story additions, to PvP season updates, and more. This is likely the last major patch this quarter, and will be the final major content addition of the 6.2 patch cycle.

This will likely mean that our next major patch, 6.3 will not release until either December 2023 or later. No further details on what that patch might contain were given. However, instead we received updates on the new NA expansion servers, and other details about the game. Check out the whole 14-hour live stream and the 6.25 announcement on FFXIV’s official YouTube channel.