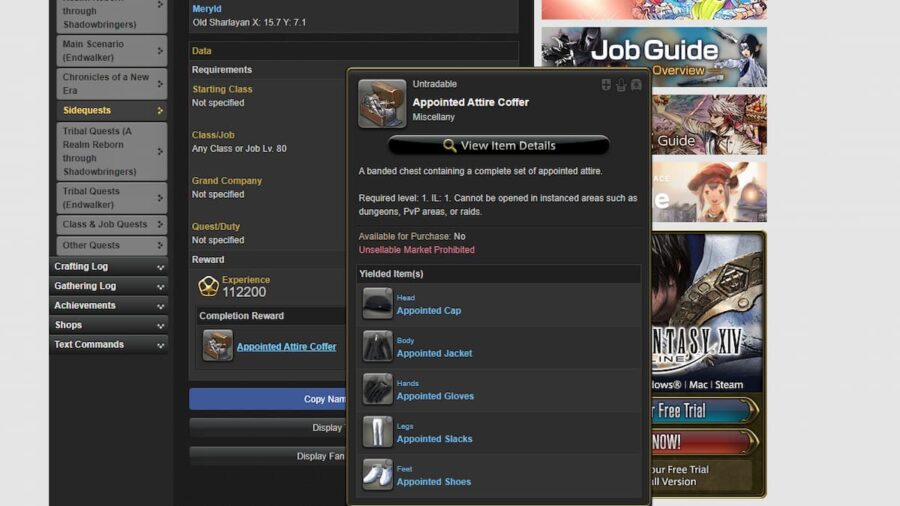 In Final Fantasy XIV’s patch 6.15 patch, a new full set of glamour gear has been added. Called the Appointed Attire, this stylish outfit features a cap, jacket, trousers, gloves and shoes that’ll make you look like one of the most stylish people in Old Sharlyan. Here’s how to unlock the Appointed Attire.

Related: How to unlock the Wind-up Arkasodara minion in Final Fantasy XIV

A Gift from House Leveilleur

The A Gift from House Leveilleur quest is a level 80 quest sync mission for any job or class that rewards 112,200 experience and 615 gil, but the real main event is the Appointed Attire Coffer. This item, once opened, gives you one each of the Appointed Cap, Appointed Jacket, Appointed Gloves, Appointed Slacks, and Appointed Shoes.

The Appointed Attire gear is item level one and can be equipped by any class, Disciple of War, Magic, Hand, or Land. This makes it a perfect glamour item. It can also be equipped right back onto Ameliance if you’ve levelled her up to maximum satisfaction and is a great reward for completing this quest chain.