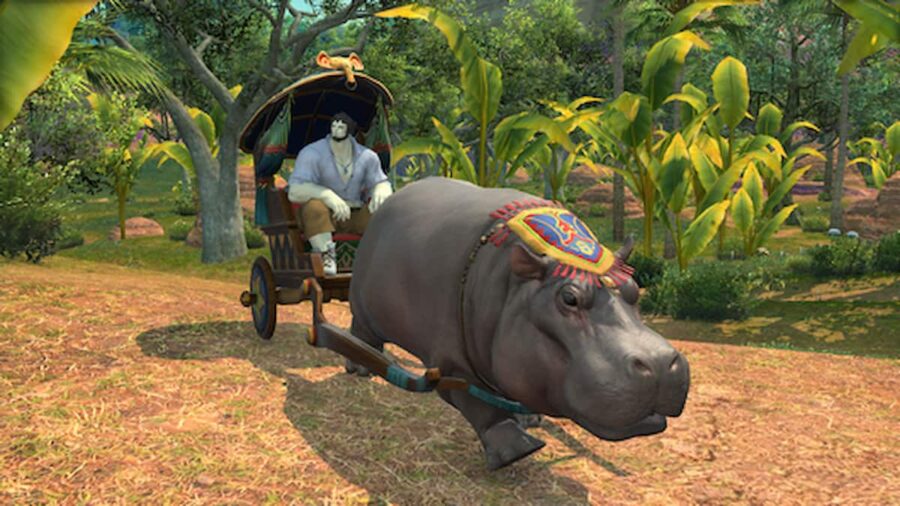 The Hippo Cart is a mount that was added in Final Fantasy XIV as part of the 6.15 patch for Endwalker. It matches its name perfectly: A hippo pulling your adventurer in a small cart behind it. And, of course, thanks to flying, this hippo can fly and bring you along with it as well. Here’s how to get a Hippo Cart of your own.

The Hippo Cart is unlocked as part of the Arkasodara tribal quests. The mount itself is used in several of the daily quests before it’s unlocked properly. To unlock the Arkasodara Tribal Quests, first head to Kacana, in Thravnair, X: 25.4, Y: 31.2, and complete the quest chain starting with The Matanga Along the Way. This sees you help the Arkasodara and the Samurai Ogul with some problems they’ve had with thieves.

The next step is to complete the quest chain in Palaka’s Stand that starts with What’s in a Parent? (X: 29.3, Y: 15.2). This chain will see Ogul begin to help Palaka’s Stand in defending themselves. Once this chain is complete you can start the quest Hippos Born to Run, with Kacana, in Thravnair, X: 25.4, Y: 31.2, which begins the Arkasodara tribal quests.

Once the tribal quests are unlocked, Ghanta in Thravnair sells various items for Arkasodara Panas. These are obtained by completing daily quests. Daily quests are accepted from Maru, X: 20.1, Y: 27.9.

Hippo Cart is purchased for 18 Arkasodara Pana. You’ll need your Reputation rank with the Arkasodara to be Sworn to be able to buy it. This usually means completing 10 or more days of tribal quests. So expect about a two-week grind for this mount.

How to unlock the Hippo Cart mount in Final Fantasy XIV