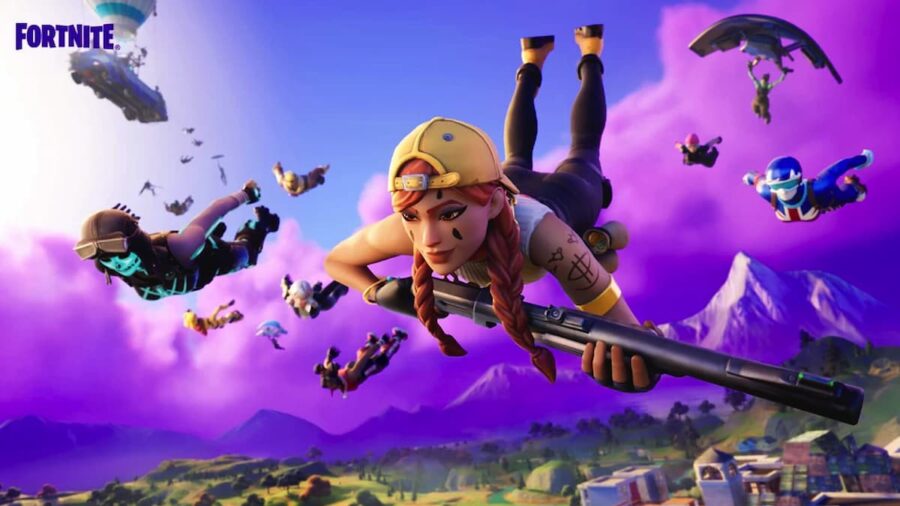 Fortnite has released many unique styled skins throughout the years, some entirely original designs or some from fan-favorite crossovers. Whether you pick them up from the Battlepass or in the V-Bucks shop, there are some skins and items that fit perfectly together to create the ultimate combo.

The top combos have been known to be the most sweaty mains for pro players and everyday players alike. If you're looking to create a new main for your Fortnite account, check out these best skin combos. You can use your own purchased skins to recreate them or consider picking up some items in the shop when they come available!

Aura is one of the most popular skins on Fortnite and is very easy to match things to with its red and gold accents. It's one of the best combo skins because it's relatively cheap to purchase in the shop, and you can easily switch up Aura's alternative styles that match perfectly with the Sun Sprout back bling. The Gold Crow is a remixed version of the Crowbar and only appears to be available for purchase in the Shadow Pickaxe Pack. However, you can easily use the regular Crowbar in its place.

Kor is a great skin, available during the Chapter 2 Season 8 Battlepass, with many different alternative styles that pair nicely with various accessories, making it one of the best skins for combos. The Shattered Wings match perfectly with her white and gold styles specifically and can be collected by purchasing the Monarch's Level Up Quest Pack in the shop. You can top off this look with the Hot Dogger pickaxe, a crossover item from the Resident Evil set.

Dynamo is one of the more OG skins that often flies under the radar but remains one of the best skins to create combos with because of its unique outfit of many colors. The Rainbow Clover pairs nicely with the green accents in the skin but, unfortunately, is a little more expensive because it must be bought with the Lucky Rider outfit. It might be worth the buy since the Rainbow Clover is perfect for various other popular combos. Then finish off the look with a simple but fitting pickaxe such as the Driver.

This combo is one of the more expensive looks to recreate if you already don't have the items. However, it is one of the best combos with all matching lava-styled items that will make your character look 10/10. The Incinerator Kuno is a part of the Magma Masters Pack, which is only available to be purchased with real currency. Still, it comes with several awesome Lava skins and accessories. While the set with Incinerator Kuno looks nice, you can pair her with the Spectral Spine in orange and Dr. Strange's Spellwork Scimitar for an even more fiery style.

Lara Croft's skin makes for some of the best combos with her detailed style and rustic, dark color scheme. If you can snatch up Michonne's Katana and the Gaffi Stick from the Walking Dead and Star Wars sets, you can make the ultimate adventurer skin combo to main. The Katana especially fits so perfectly with the outfit that it's like they were made for each other. You can even switch out the Gaffi Stick to use Michonne's Katana for the pickaxe as well, but the Gaffi stick adds a nice earthy touch.

Skeletara is one of the most popular Fortnitemares skins introduced to the game and makes for some of the best combos with her glow-in-the-dark neon blue accents. While her set comes with great accessories, the Spectral Spine brings this skin to a new level. You can purchase the back bling with the Cryptic Outfit for 1,200 V-Bucks, and then top off the combo with the fitting but straightforward Reaper pickaxe for only 800 V-Bucks.

Midas remains a popular skin despite being available during early Chapter 2. It's one of the best skins for combos due to its gold accents and interchangeable styles. The Gold Token makes the perfect combo when paired with Midas, but if you don't already have it, it can be almost impossible to get since it was part of a special crossover challenge. You can easily trade out the Gold Token for other gold back blings. You can finish the golden combo with the Gold Crow or switch it out with something more simple like the Driver or Harley Hitter.

Siren has quickly been utilized as one of the most popular sweaty skins since it was released, and it makes for some great combos with its neutral tones and unique characteristics. While she pairs well with many pickaxe options, the Leviathan Axe looks especially great with her Noir style, creating an icy cool combo. Create your twist by adding a back bling that you think works, or rock the look without any back bling.

Zadie is another excellent skin with a tactical camo, masked appearance, and three alternative styles that make for some of the best combos. You can use Rainbow Clover for a green pop that looks great with Zadie's Jungle style. The Harley Hitter works well for the back bling, mostly with Zadie's default skin. However, both accessories look fabulous no matter what Zadie style you prefer and make for an epic sweaty combo.

The custom Superhero skins found in the Boundless Set are becoming some of the most popular choices for combos because of their vast potential. They can easily make some of the best combos because you have the freedom to change their costumes, colors, and more. Take your pick of the skins available in the set, play around with the customization options, and pair it with your favorite pickaxe.

These are just a few of the best combos most widely used currently in the game, but there are endless options with so many skins and accessories to choose from. Feel free to comment below on some of your favorite combos!