Our Fortnite Season 10 (X) Boogie Down Challenges Guide walks you through everything you need to know about this mission for the Season X Battle Pass! We've got a full list of the challenges, solutions, rewards, and a cheat sheet that should easily get through through this set of objectives.

This is another of the themed, weekly missions that will be appearing during this season. These challenges are based around dancing and getting your boogie on! The majority of this mission is using Boogie Bombs, dancing at areas, or something to do with music.

Here are a couple of images with a full list of challenge locations. Credit to ItsEnergie. If you want more detailed information on the challenges, you can keep scrolling down the page!

The rewards for these challenges are based upon how many you've completed.

Hit an opponent with a Boogie Bomb (2)

You'll have to do this twice, so open up a lot of chests and collect some Boogie Bombs. Team Rumble would be a good one for this, you'll get a lot of time to look for the grenades and you'll have a lot of opponents to throw them onto.

Dance in front of a bat statue, in a way above-ground pool, and on a seat for giants (1)

You'll need to dance at three different locations to complete this challenge. The first is the Bat Statue which can be found in Haunted Hills. Second, you'll want to head to the WAY above-ground pool. This is on the new floating island, it's right next to the house. This location is moving slowly, so it might not be where it is shown on the map when you go to complete the challenge. Finally, you'll need to go to the seat for giants, which is located in the unnamed area that is south of Shifty Shafts. This area typically has some kind of structure built there, in the past there's been a sled and a spaceship! 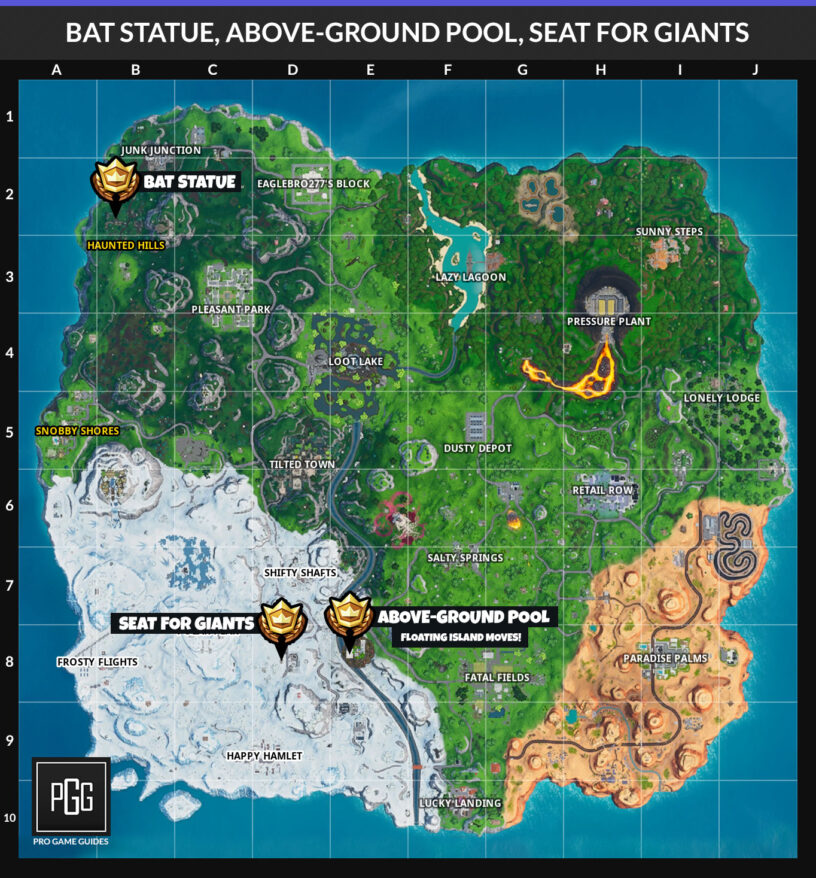 Get an elimination with a Shotgun, Assault Rifle, and an SMG (1)

You don't have to do all of these at once, so you'll likely just finish this playing the game normally. If you want to just knock it out, then I'd head into Team Rumble.

You will need to use a traversal dance emote to complete this challenge. You get the Tra La La emote at tier 14, so you should have at least that one. If you want to see a list of all of the traversal emotes, check out right here. Just engage the emote and start walking around, hopefully you don't get shot while doing so!

The oversized piano location can still be found on the very east side of the map and is right near Lonely Lodge. It is also just north of the abandoned superhero mansion.

There's quite a few of these No Dancing signs scattered across the map. You'll find a full list of the locations below on the map. 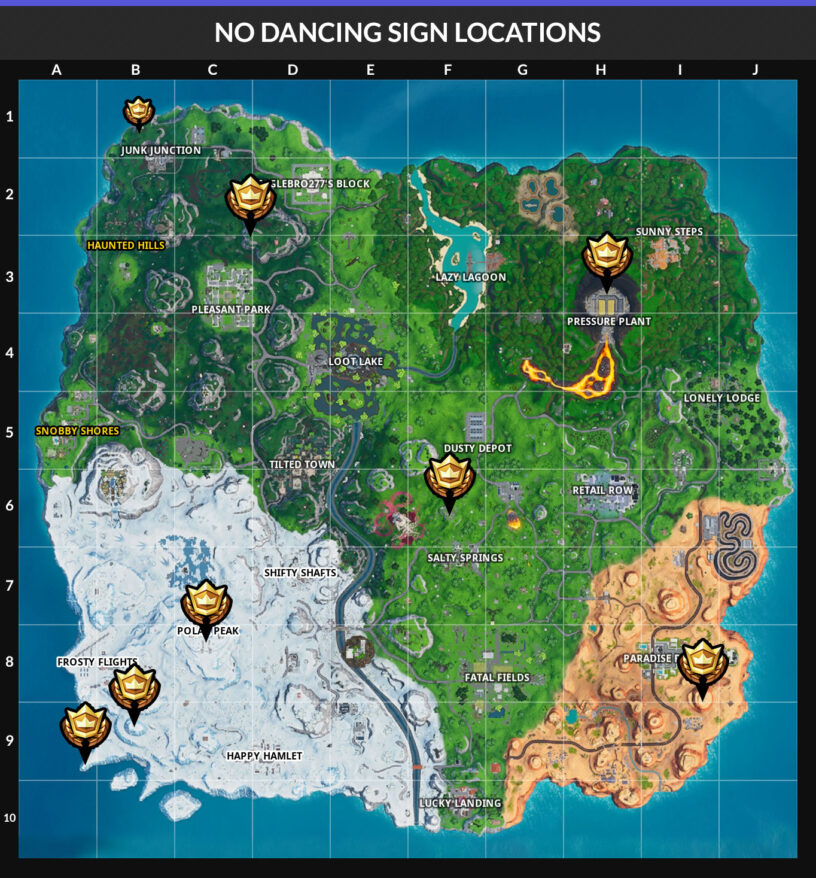 The controversial B.R.U.T.E. spawns randomly on the map in every match. You'll just need to jump in one and use one of your dance emotes. You can do this like you would do any other emote, just make sure it's a dance!

Damage an opponent affected by a Boogie Bomb (2)

This is a bit more difficult this time around, but it's going to be rare when you don't actually get some damage on a player after hitting them with a Boogie Bomb. I again would do this in Team Rumble, although your team might foil your damage plans.

Dance in front of a bat statue, in a way above-ground pool, and on a seat for giants in a single match (1)

This time you're going to need to do this in a single match, which makes it quite a bit harder. I'd hit up the floating island first, jump off of that and glide to the giant seat and look for a Hoverboard at one of the Outpost Stations. There's one of these to the south on a mountain if you take the zipline up to it. After that, head on over to Haunted Hills for the final dancing at a Bat Statue. I'd try to do this in Team Rumble, but it might be a bit difficult to do there because the storm closes in kind of quickly. You also might need to cross enemy lines to make it to one of the locations.

Get an elimination with a Sniper Rifle, Pistol, and an Explosive Weapon (1)

Another good one for Team Rumble! You don't have to get all of these in a single match, so just try to utilize each of the weapons when you get a good one. The Explosive Weapon might be the most difficult because they can be hard to find.

You will need an additional person to complete this. So, either grab a friend, or jump into a random duo game and hope for the best. You can also just go solo and there will likely be a lot of people attempting to complete this challenge. You can also try Team Rumble, there'll probably be some players willing to help you in there. The icy airplane hangar can be found in Frosty Flights, it's the western most hangar.

Play the sheet music at an oversized piano (1)

Head back to the oversized piano that is located on the east side of the map and south of Lonely Lodge. You'll see a sign on the very left of the piano if you're facing it. The sheet music displays the following keys, "C-E-G-E-C." All you need to do is step on the correct keys in that sequence. Use the left most side of the keyboard to do this, there's keys that are the same letters to the right, but we just want the ones on the left. Once you complete the correct sequence, it will play the song on its own. 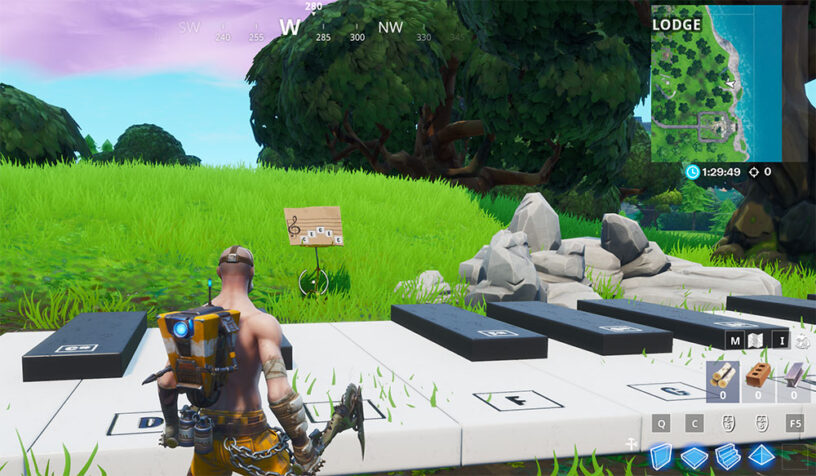 Dance after opening a supply drop in different matches (3)

This one is tailor made for completing in Team Rumble. A lot of supply drops throughout the match, so just make sure to focus on when it happens and open one up before someone else does. Don't forget to dance afterwards either! You'll need to do this in three different matches, so you can just leave after you've done it.

First, make sure you have the YOND3R outfit equipped. You will need to be at tier 43 of your battle pass to complete this challenge. Once you've got that, head into a game and fly over to the unmarked building that is northeast of Happy Hamlet. It's right to the east of the mountain that is near that location. You'll see a big hole in the wall, with a DJ booth, and a huge dance floor. Dance at the booth with the outfit on to complete the challenge. 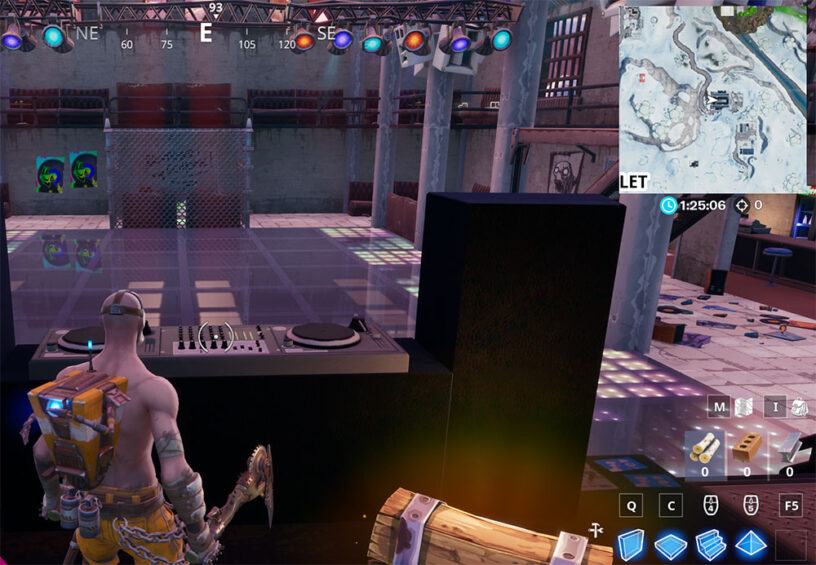 How to Turn on Performance Mode in Fortnite

How to Crouch in Fortnite (Xbox, PlayStation, Switch, PC)