We're taking a look at all of the Meowscles' Mischief Challenges and how-to complete both week 5 and 6 them in this guide! In Fortnite Chapter 2: Season 2, Challenges are a bit different in that they are themed based on one of the skins you receive in the battle pass. If you complete at least 18 of these Meowscles' Mischief Challenges you will get the choice to obtain the Ghost or Shadow style for the Meowscles skin! Once you've selected your choice, you will not be able to obtain the other style.

Here's a full list of the Meowscles challenges for week 6: 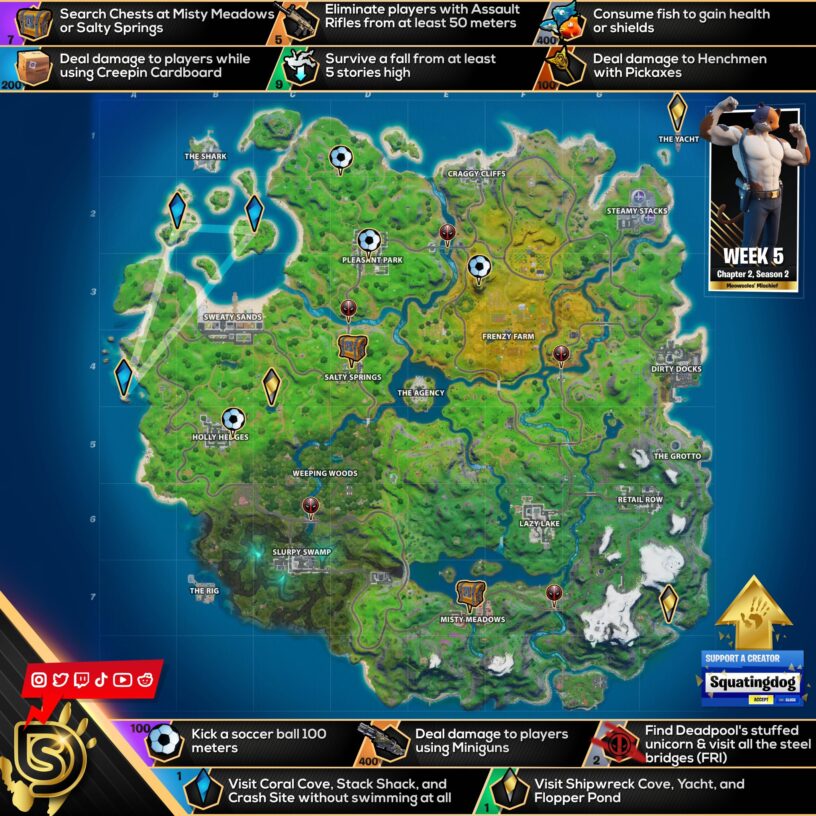 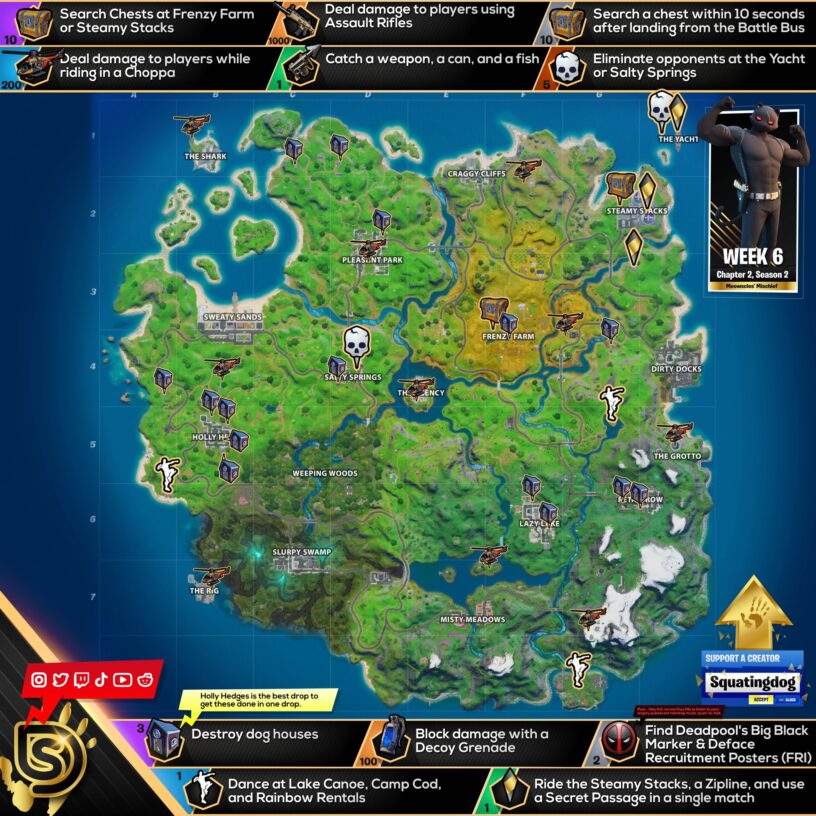 Once you've completed 18 of Meowscles's Trial Challenges you will be able to pick ONE of the following styles for the Meowscles skin. As far as we know, you won't be able to get the other one so make sure you choose wisely.

Salty Springs is a hugely popular drop spot, so I would absolutely avoid it if you are looking to do this challenge in the normal battle royale. If you're doing this in Team Rumble, which I would recommend, then head to the spot where less teammates are landing!

Eliminate players with Assault Rifles from at least 50 meters (5)

Head to Team Rumble, pick up an Assault rifle, and snipe people from afar to complete this challenge! You usually get quite a few opportunities to land far from the main concentration of players and can usually pop shots at them and pick up some eliminations.

You can really just go all over the river areas and find fishing poles with fishing hot spots in the water. If you want a more targeted spot, you can go to the small lake to the east of Holly Hedges. You can also go directly south of Sweaty Sands and there's a pretty good sized lake there to do some fishing. If you only get the orange health fish, you can jump off a high ramp to deal some damage to yourself that will allow you to heal.

Creepin' Cardboard can be found in the environment in various locations, as floor loot, and it drops from all types of chests. You can carry it in your inventory and throw it on the ground. Once you do, you can jump in and hide in it. When you're ready to deal some damage from it, just aim down the sights and take your shots. This challenge is going to be pretty difficult, you might be able to pull it off in Team Rumble if you can get in a box in a populated area.

Survive a fall from at least 5 stories high (9)

This would be a good challenge to combine with the consuming fish to gain health or shields one. You can build up five ramps that should get you at least 5 stories high, and then jump off of it. You want to limit the height you jump from so you don't accidentally eliminate yourself. I would do this in Team Rumble since you can easily mess it up and not be overly punished for doing so.

Deal damage to Henchmen with Pickaxes (100)

There's Henchmen all over the place, but especially at The Shark, Yacht, Grotto, Agency, and Rig. You can also find them at the Ghost and Shadow spawns that are in unnamed locations.

You can't swim to any of these locations, so the easiest way to do this is to grab one of the new helicopters! The purple circles on the map below show where they can be found, there's one directly east of Stack Shack. You can grab the Pleasant Park one as well, or land at The Shark. 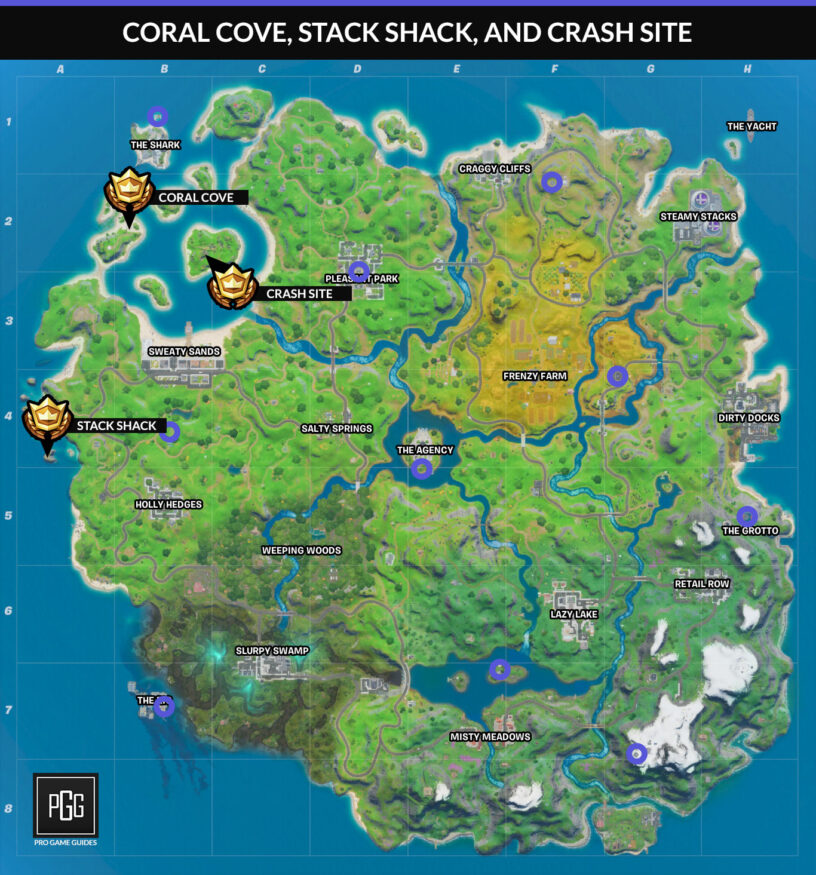 You can find a soccer ball over at Pleasant Park. The field that is there is opened up where you can find a Choppa. Right near the edge of where this secret area has opened up is the ball you can kick around. 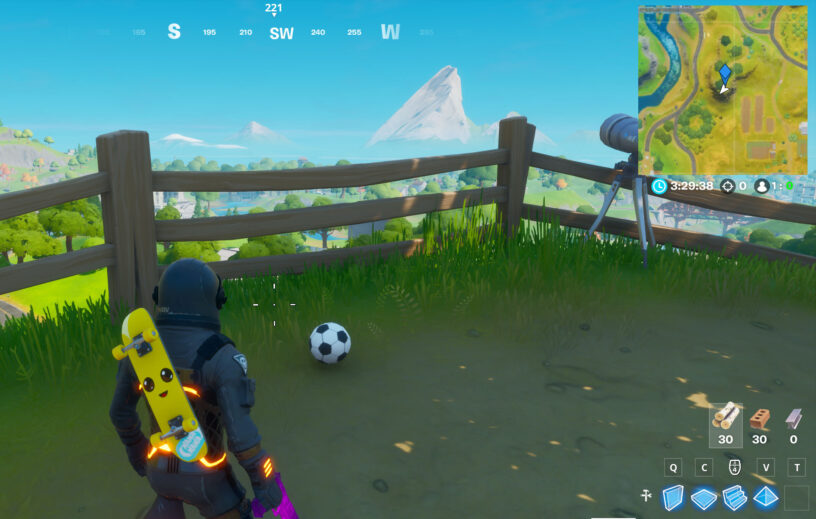 There's another soccer ball location to the northwest of Frenzy Farm and up on a hill. Kick it down the hill and hopefully that will end up giving you the 100 meters you are required!

The easiest place to guarantee yourself a minigun is to go to The Grotto. The Henchmen there will be wielding them, but you can takeout Brutus to get him to drop the mythic version of the minigun. Unfortunately, you can't do this in Team Rumble so you'd have to find one elsewhere if you want to do get this challenge done in that mode.

Shipwreck Cove is on the southeastern side of the map at H7, The Yacht can be found in H1 on the northeastern part of the map, and Flopper Pond is to the west at C5! 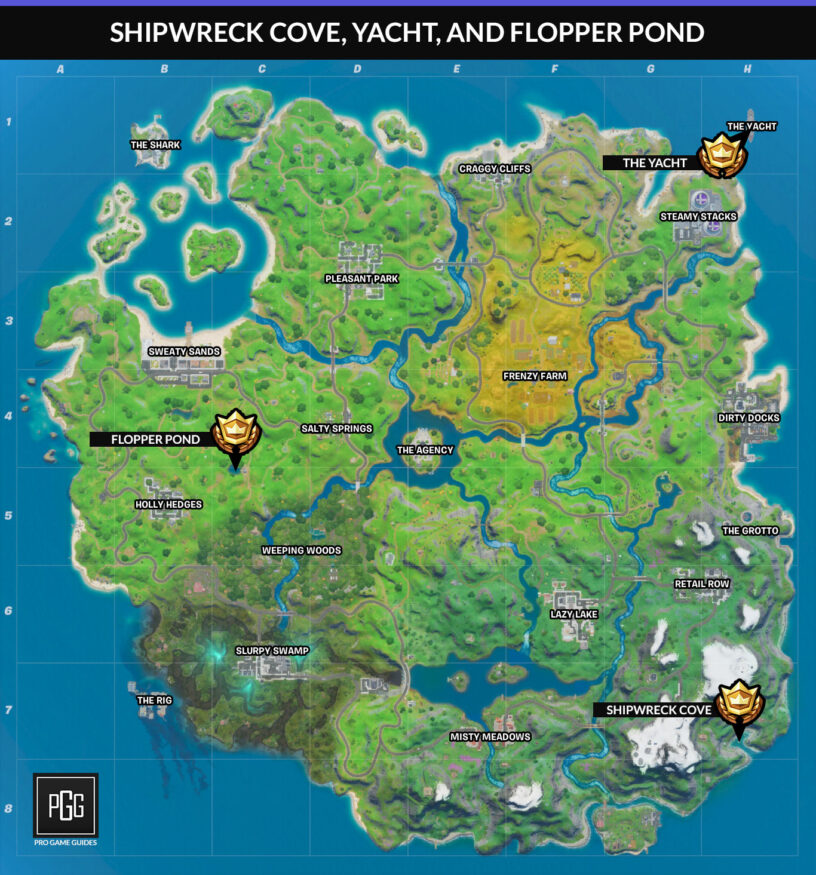 Steamy Stacks has more chests in it, but it doesn't really matter as long as you land at one that doesn't have many players at it. Go into Team Rumble and head to the spot where your teammates aren't landing so you can open up all the chests by yourself.

This is an easy one, it's just going to take a bit of time. I'd head into Team Rumble and just only use an assault rifle to deal all your damage. It should only really take you a couple of games.

I'd look towards non-named areas to complete this challenge. If you check beaches or just fly over land areas that aren't labeled you will usually find small areas that have exposed chests. You can just land right on one and open it up.

Deal damage to players while riding in a Choppa (200)

You're going to need to get into a Choppa and then shoot players from one of the passenger seats. You could technically do this solo if you jump into the Choppa and switch seats when you see someone. The problem is that once you're out of the pilot seat, your helicopter will start to fall to the ground! So, make sure to pop those shots off quickly. 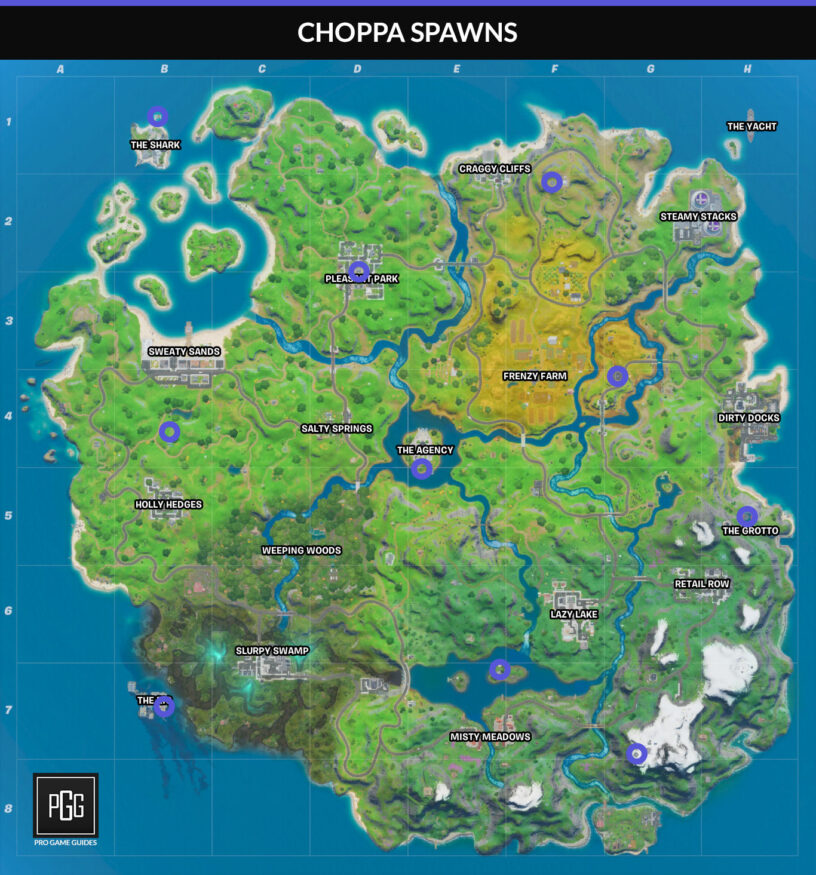 You can catch a weapon and a fish in an active fishing hole. To catch a can, you just need to cast your line in the water. You'll catch some ammunition and eventually a Rusty Can.

Eliminate opponents at the Yacht or Salty Springs (5)

If you want a lot of action, just head over to Salty Springs and join the hot droppers who frequently land there. The Yacht is going to be quieter, unless the bus flies directly over it. If you only do these in Team Rumble, it's possible to get a circle over Salty Springs that could help you out.

Here's a bunch of dog house locations on the map. There's like more, but this should be enough to get the challenge done! 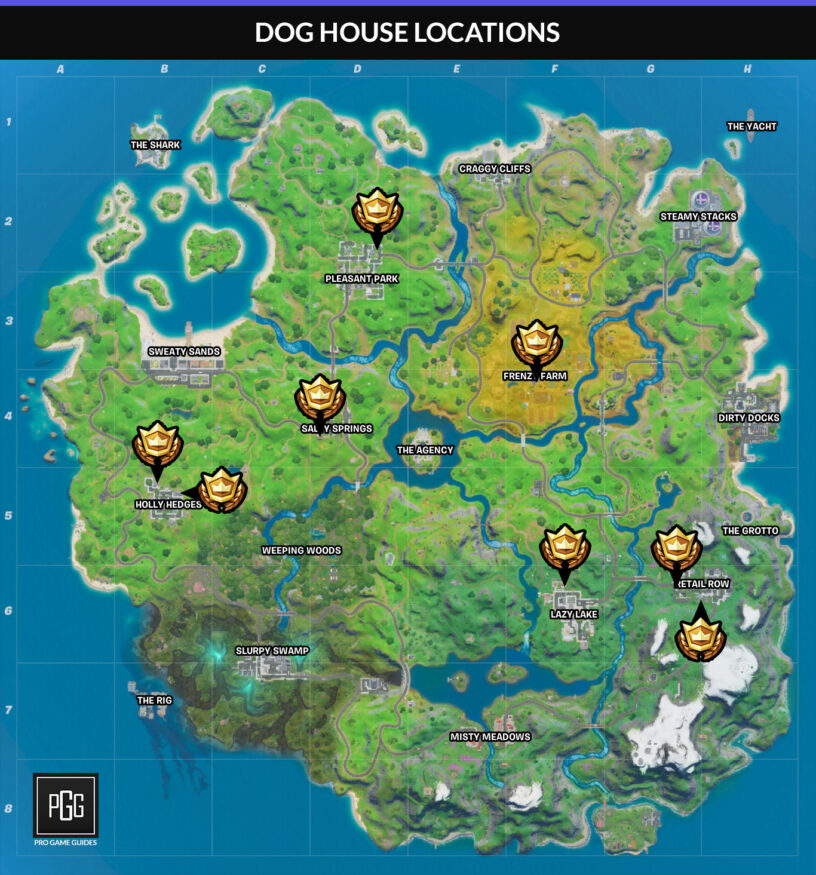 Block damage with a Decoy Grenade (100)

Find yourself some Decoy Grenades and try to bait someone into firing at them!

These locations are all pretty spaced apart, so I would grab a Choppa and fly to all of them. You can do this in Team Rumble, which is a lot easier because you'll have the benefit of using the glider. 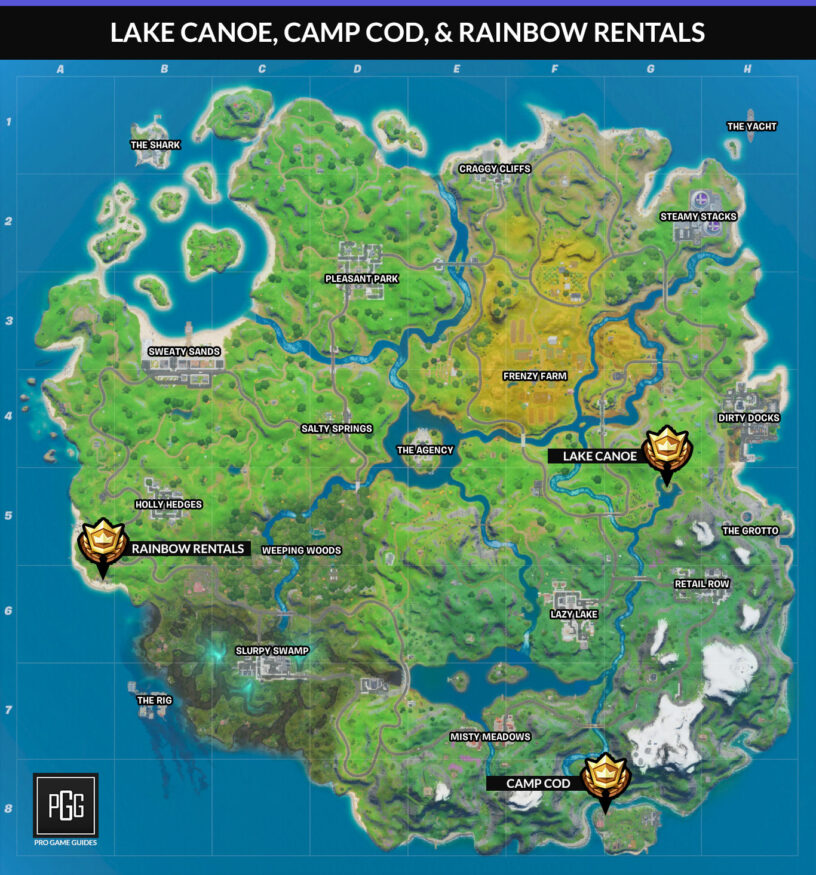 Ride the Steamy Stacks, a Zipline, and use a Secret Passage in a single match (1)

I would head over near Steamy Stacks and land on the zipline that leads into the area. Look for the big powerlines, these are what you can connect to that count as a zipline. You can then run from there right into the stack and take flight. Fly from here to the west and you can find a secret passage that will lead into a henchmen area. Credit for the map to Lootlake.info. 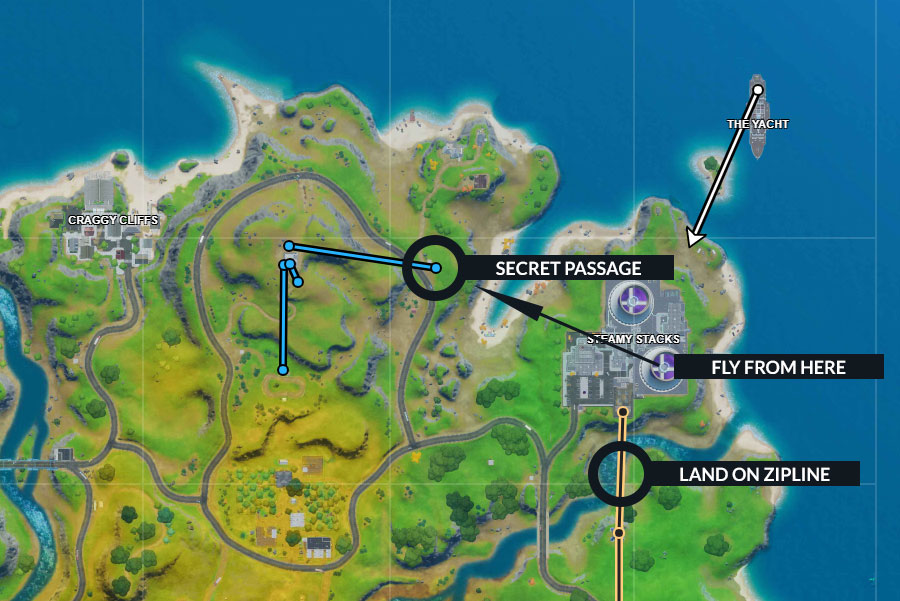 To complete this challenge, you just need to go fishing and bring the fish over to whichever faction dropbox you want your Meowscles skin to be! You need ten fish in total, but you don't need to do them all at once. You can do a few at a time, or just catch them all and complete it right away. 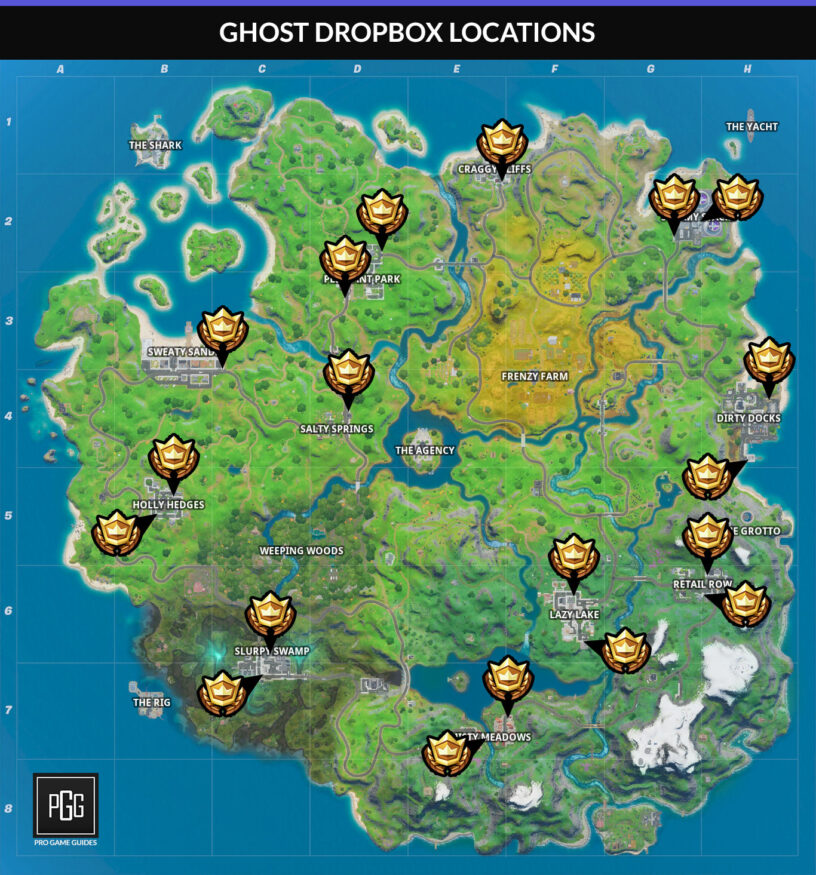 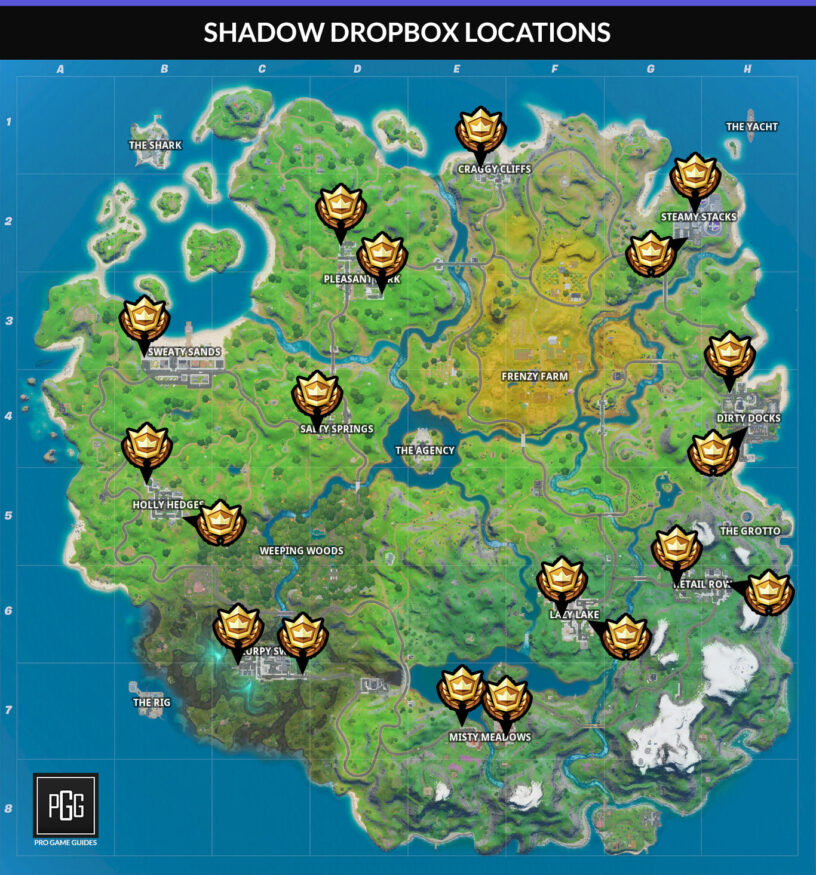