We're taking a look at all of the Midas' Mission Challenges and how-to complete both week 9 and 10 them in this guide! In Fortnite Chapter 2: Season 2, Challenges are a bit different in that they are themed based on one of the skins you receive in the battle pass. If you complete at least 18 of these Midas' Mission Challenges you will get the choice to obtain the Ghost or Shadow style for the Midas skin! Once you've selected your choice, you will not be able to obtain the other style.

Epic has added some secret challenges to the game and they are only available for a limited time! Check out our Hidden Challenges Guide for information on those.

Here's a full list of the Midas challenges for week 10:

You can decide which one of these you want to complete based on what style of skin you want!

You can find all of these spots with our Dropbox Locations post! 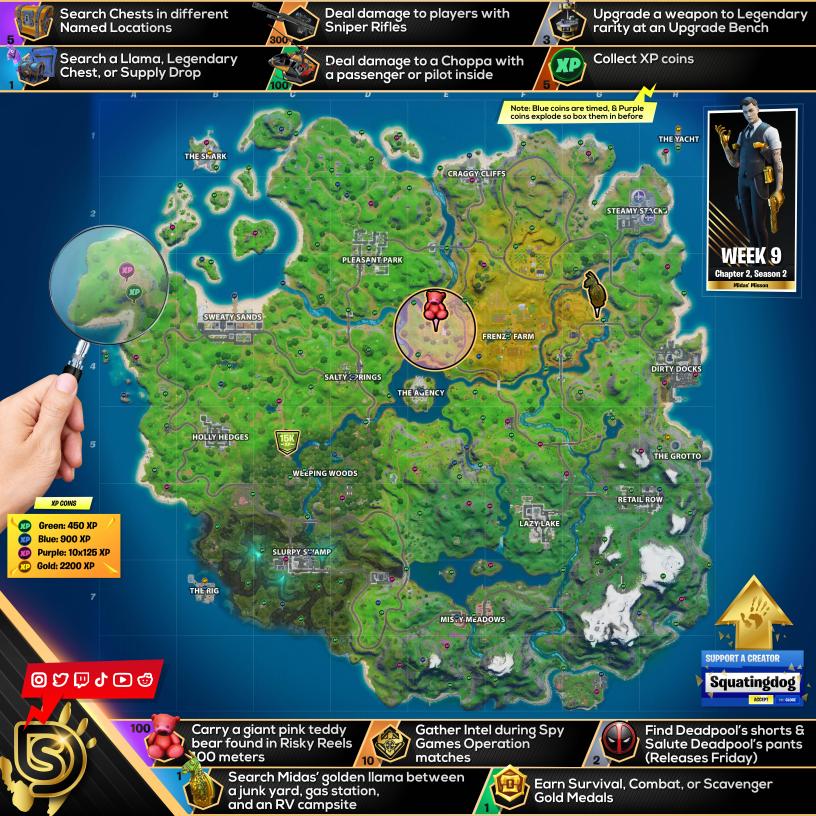 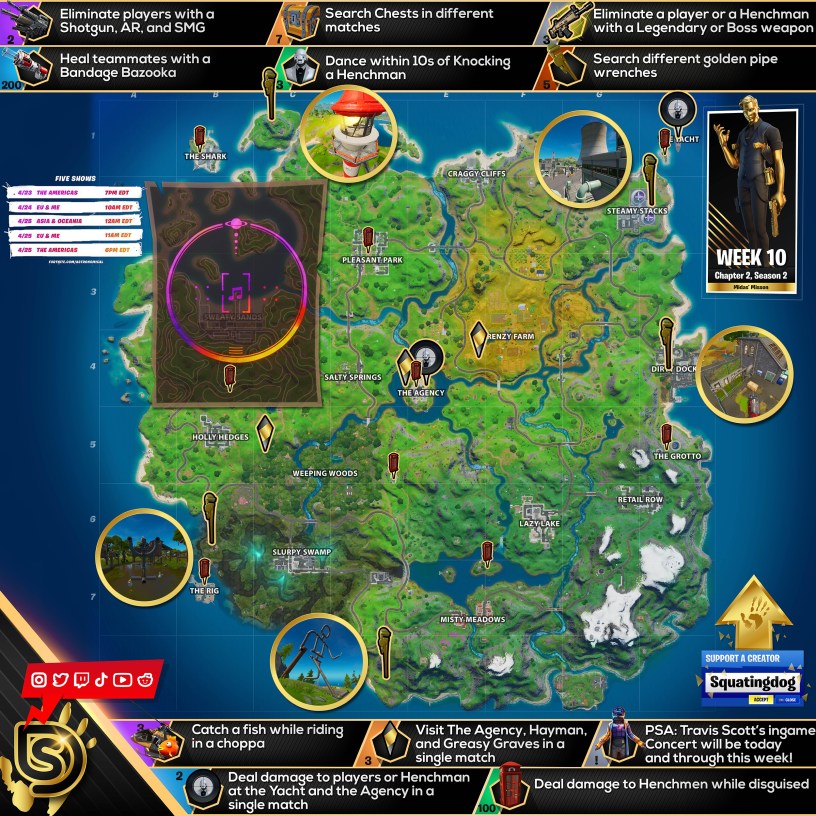 Once you've completed 18 of Midas' Challenges you will be able to pick ONE of the following styles for the Midas skin. As far as we know, you won't be able to get the other one so make sure you choose wisely.

You'll need to go to five different locations that are labeled on the map. Places like Pleasant Park, Sweaty Sands, and Salty Springs. Pretty easy challenge, you can likely focus on other challenges and finish this one passively.

If you aren't great with a sniper, then heading into Team Rumble is going to be your best option. You can also try Squad games where players are a bit more out in the open sometimes. Finding a Sniper Rifle can be a bit difficult, but options other than the Heavy Sniper are not too hard to find.

Upgrade a weapon to Legendary rarity at an Upgrade Bench (1)

Find yourself an Epic weapon and look for an Upgrade Bench. You need quite a few resources to upgrade, but if you go into Team Rumble you start off with a bunch which makes it easier. You can find all of the bench locations on the map below, credit to LootLake.info. 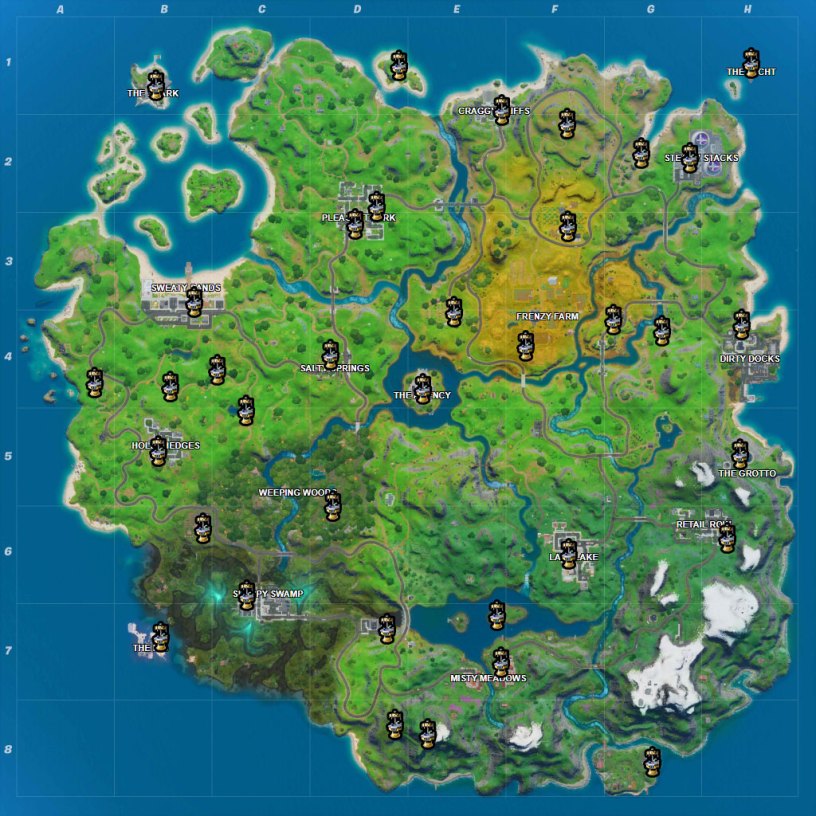 Legendary Chests are random spawns and can appear in any locations that a chest shows up in, so you're just going to need to get lucky to find one. You can find Llamas and Supply Drops in Team Rumble. Try to float around with your glider looking for the llama, you'll want to cover a lot of ground because only a certain amount of these spawn in every match. Supply Drops fall pretty regularly in Team Rumble, so they are pretty easy to get but make sure to box up because some players target them.

Squads is probably one of the best options for this because people are likely hopping in these more often. I would grab some guns and then head to any of the Choppa spawn locations. Wait for someone to jump in one and then fire at it. You'll likely have more lucky with this is you hot drop somewhere. 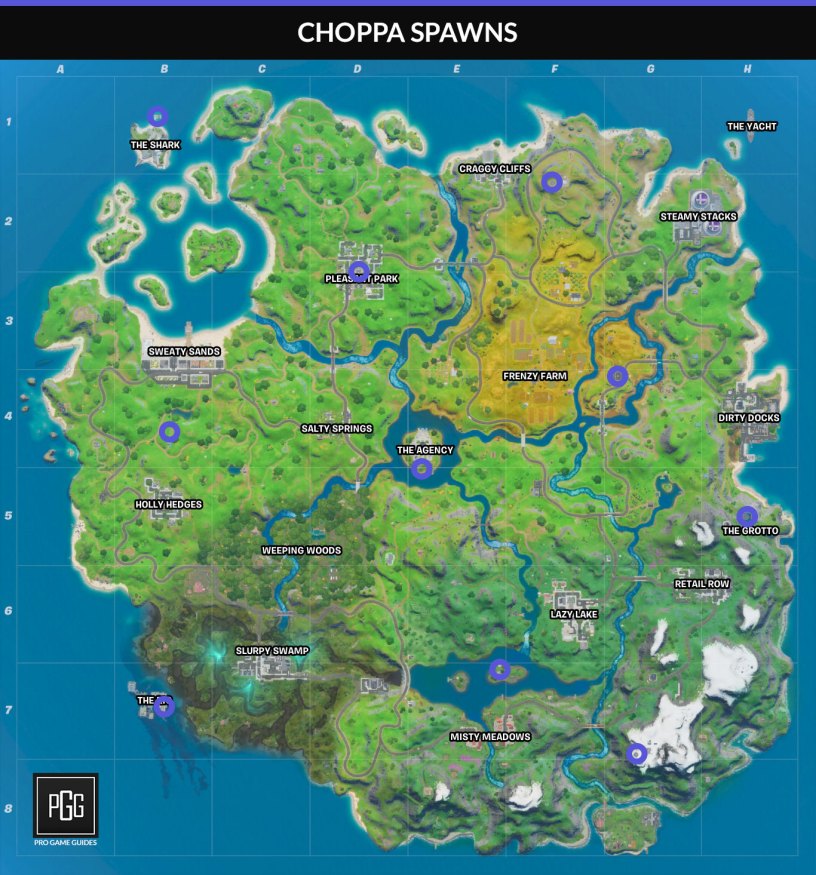 The Giant Pink Teddy Bears can be found right in the middle of Risky Reels. You'll find that location directly west of Frenzy Farms. I HIGHLY recommend waiting for this challenge because a lot of people will be landing here once it is released. You could try it in Team Rumble if your team gets the side with Risky on it. Beware, however, because some people will crossover just for the challenge! All you need to do when you get there is interact with the bear and run it for 100 meters. You should see an alert when you've completed the run. 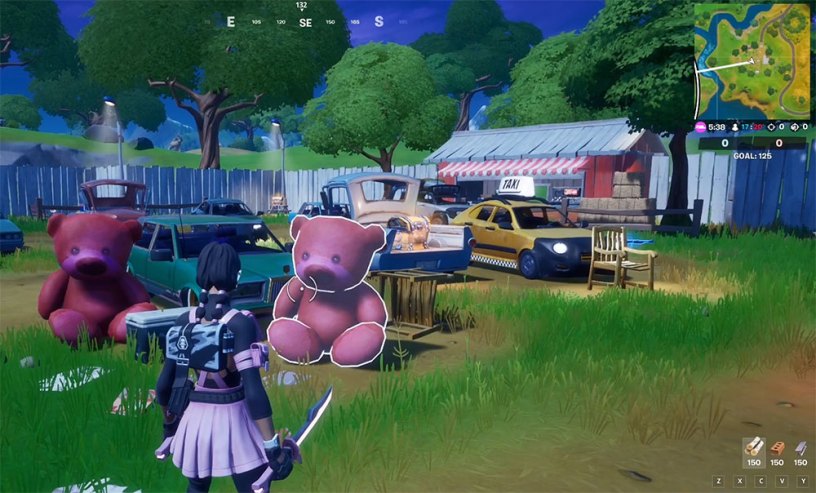 The location of the Golden Llama is east of Frenzy Farm. If you follow the road to the east there, you'll come across a gas station and eventually there's a small building right before a little bridge. Head inside of there and you'll find the big Golden Llama on the wall! Just interact with it and you will have completed the challenge.

You'll need to head into one of the Spy Games Operation LTMs to finish this challenge. You need to grab Intel, which is in Supply Drops that can be opened. Pop open one of these and gather what you need!

These are the highest medals you can earn for each of these categories:

The Survival medal requires that you end up in the top 10 of a match! So, you'll need to do that in a normal round of Fortnite. You can just try to hide your way to the end if you aren't a great player.

If you want to get the Combat medal, you'll need to get eight eliminations in a match. Team Rumble is your best option for this. Just try to take as many fights as you can and you should be able to bully your way to a bunch of elims.

For Scavenger you need to open 12 chests, llamas, or supply drops. I'd head into Team Rumble and land at an unpopulated named location to have a bunch of chests available to you.

Eliminate players with a Shotgun, AR, and SMG (3)

This one's easy and you can just get it done in Team Rumble! Make sure to grab each of the weapons and try to get an elimination with them. AR is an Assault Rifle, it should work with any type you want whether it be a burst, standard, or SCAR.

Kind of a longer challenge because you will need to play at least seven different matches to complete it. I wouldn't focus on this one, you should just complete it while you are doing all of the other ones! Just make sure to try and open a chest in each match you play.

Finding a Legendary is probably going to be easier, but it's a bit more hit or miss on if you can get one. If you head into Team Rumble, you can look for one or you can find an Epic weapon and upgrade it to a Legendary. There's also a lot of Supply Drops, which could have a Legendary in them. Once you have one, you can then just get an elimination with it. The Boss weapon aren't super easy to get and you could have to fight other players for them.

Heal teammates with a Bandage Bazooka (200)

This would be easiest in a Squad game most likely, but Team Rumble would also be an option. You can find these from chests or Supply Drops. Then just look for teammates that have been damaged!

Dance within 10s of Knocking a Henchman (3)

Once you knock a Henchman you'll need to use a dance emote within 10 seconds of the downing. You need to do this three different times, so try to pair this up with the deal damage to Henchman while disguised challenge!

There's five total Golden Wrenches to find on the map. You can find one of them at the top of the lighthouse at C1, one is at Steamy Stacks on the east side of the area, in the middle of Dirty Docks, pipe man is holding onto a wrench at D8 to the south, and you'll find the fifth one over to the west at B6 in the middle of Shanty Town.

For a more detailed look, check out our Golden Pipe Wrenches Locations post. 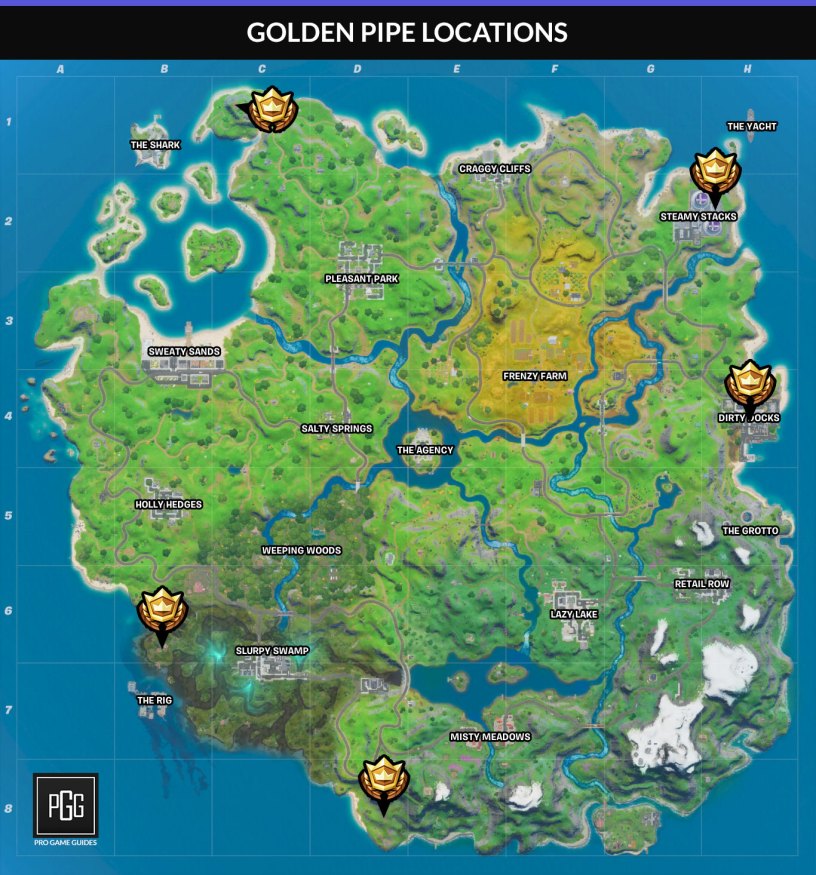 Catch a fish while riding in a Choppa (3)

This is going to be easiest in a duo or squad match if you've got a friend. The definition of "riding" in a Choppa might mean you could do it solo if you land the Choppa and just switch seats and fish out of the Choppa by yourself! I'm not positive this will work, but it could be worth a shot. You can't find the helicopters in Team Rumble unfortunately.

Dealing damage to Henchman is going to be the easier option. I would go to The Yacht and deal some damage to a Henchman, then jump into the Choppa and fly over to The Agency and then deal damage to one there!

Visit The Agency, Hayman, and Greasy Graves in a single match (3)

You need to visit these all in the same match, so I would do it in Team Rumble if possible. However, if you want to do it in the regular modes, then I'd grab the Choppa at The Agency and fly to Hay Man then head over to Greasy Graves! 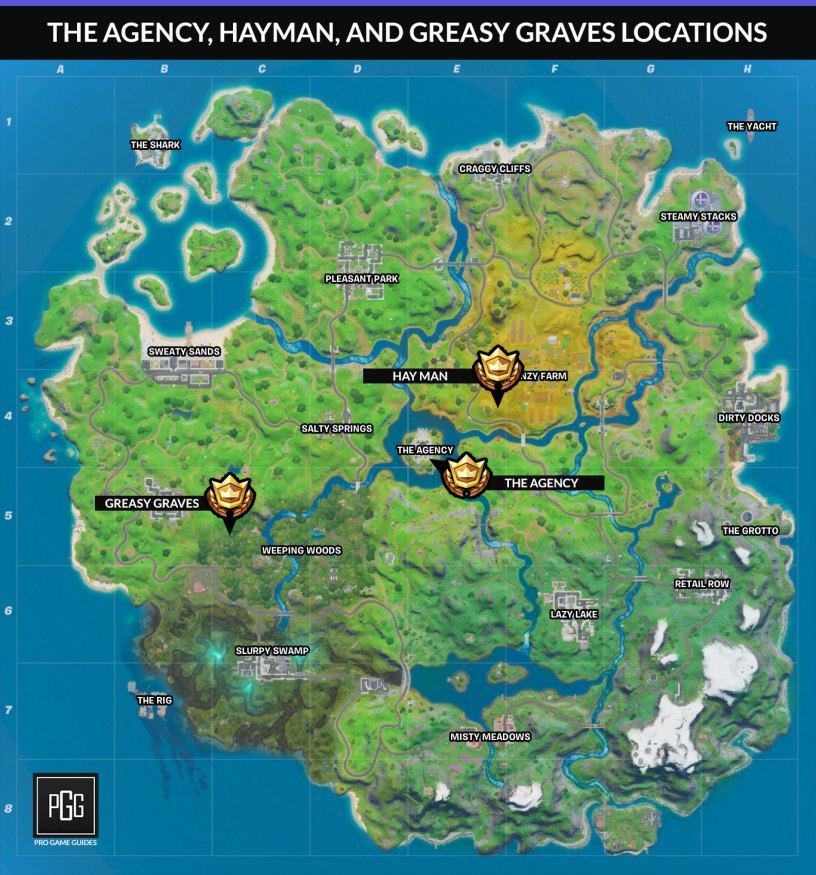 Deal damage to Henchman while disguised (100)

You'll need to jump into one of the phone booths that are scattered around the map and then deal damage to Henchman while in the disguise! Here's a map of all the phone booth locations: 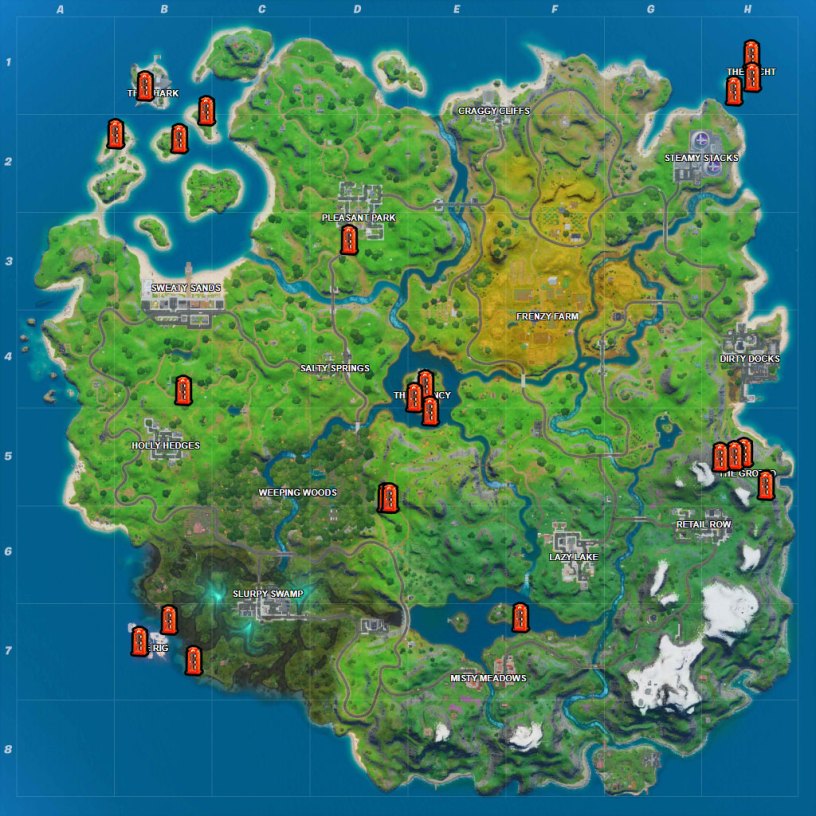