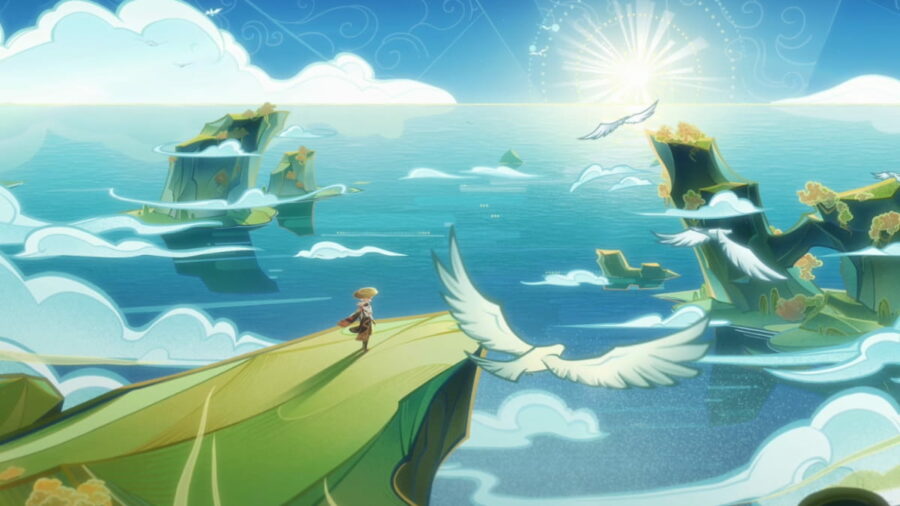 The Golden Apple Archipelago is back for Genshin Impact's Summertime Odyssey event, which runs from July 15, 2022, to August 24, 2022. Various characters will have personalized Domains that you can clear once to loot a ton of Chests and learn more about their lore. Kaedehara Kazuha's Domain is called As the Courtyard in Spring Once Appeared, which is divided into three parts. In this guide, we'll show you how to solve all puzzles and find all nine Chests and one Phantasmal Conch in Part 3 of the Domain.

After completing the second part of the Domain, you'll be asked to pick up materials for Kazuha's bonsai. Head to Pudding Isle and follow the quest marker to the top of the mountain, where you need to defeat the enemies and open an Exquisite Chest. Once that's done, head back to the small island and place the materials onto the bonsai to begin Part 3 of Kazuha's Domain.

Before starting, reference the image above to understand the puzzle mechanics in this Domain. Prismatic Seals will change the color of the Prismatic Ramparts (green, yellow, red), while Melodic Omamori need to be placed inside Shrines.

Upon entering the Domain, look behind you to find a Prismatic Rampart.

In the next room, you'll be greeted by an Electro Seelie that will guide you throughout the rest of the Domain.

This time, enter the room to solve the mechanism puzzle. The mechanisms are numbered in the image above for easy reference.

You should have two Melodic Omamori hovering around you.

Related: Genshin Impact Quiz: Which Archon are you?

Keep following the Seelie until you reach a platform with three locked items.

The Seelie will continue guiding you to the next platform.

Cross the bridge to prompt dialogue and a cutscene, completing the Domain. If you forget to loot any of the Chests in the Domain, you can still go back after completing this Domain. Interact with the bonsai on Kazuha's island and choose Misty Hills, Foggy Vales, then check the Phantasmal Tales section and enter your preferred Mirage.

Other As the Courtyard in Spring Once Appeared guides

Check out our guide on All Chest locations in the Golden Apple Archipelago – Genshin Impact Summertime Odyssey event to loot even more limited-time Chests in the GAA.