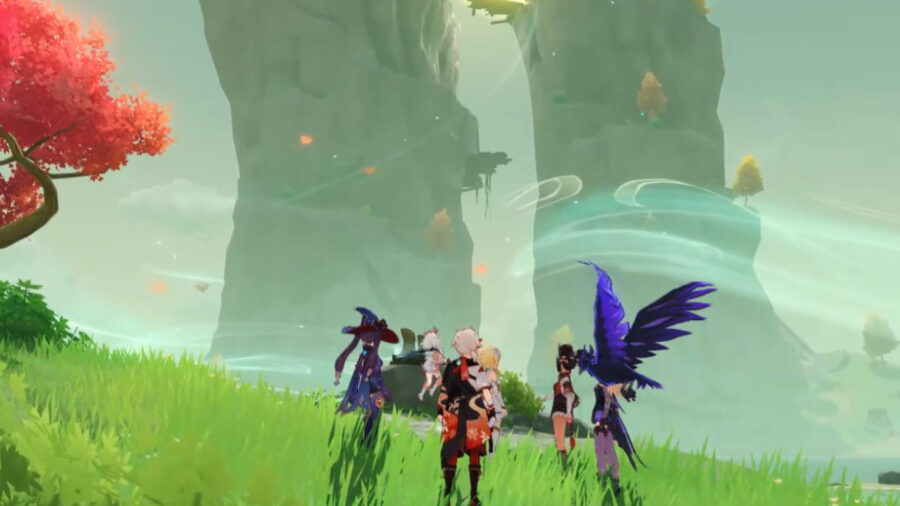 The Golden Apple Archipelago is back for Genshin Impact's Summertime Odyssey event, which runs from July 15, 2022, to August 24, 2022. Various characters will have personalized Domains that you can clear once to loot a ton of Chests and learn more about their lore. Kaedehara Kazuha's Domain is called As the Courtyard in Spring Once Appeared, which is divided into three parts. In this guide, we'll show you how to solve all puzzles and find all nine Chests in Part 1 of the Domain.

After completing The Golden Apple Vacation Returns!, fast-forward the in-game time by one day to get the second Event Quest called As the Courtyard in Spring Once Appeared. You'll be asked to head to the Pudding Isle, where the dialogue will automatically prompt you to enter Part 1 of Kazuha's event Domain.

Before starting, reference the image above to understand the puzzle mechanics in this Domain. Prismatic Seals will change the color of the Prismatic Ramparts (green, yellow, red), while Melodic Omamori need to be placed inside Shrines.

Follow these exact steps upon entering the Domain to complete it perfectly and get all Chests.

If you solved the puzzle above as prescribed, the Common Chest will unlock for you to claim.

After claiming the first Common Chest, go further into the chamber. Ignore the puzzle for now.

The room in front of you will change into a Dojo. Head inside the new room.

The room in front of you will change back to the previous one. But now you can solve the puzzle. The mechanisms are numbered in the image above for easy reference.

Doing so will unlock the Exquisite Chest for you to loot.

After solving the second puzzle, we need to change the rooms in the Domain again to proceed.

To find the second Melodic Omamori, you need to go further into the Domain. Simply follow the path forward.

If you get lost after jumping down, go behind the stairs and turn left, as there's a narrow corridor that will lead you further in.

Following the path forward will lead you to a room containing the second Melodic Omamori and an Exquisite Chest.

Inside the new room, you'll find another Prismatic Rampart and a switch in front of it.

The room in front will change into a Dojo.

After collecting the items above, go back up to the location of the Prismatic Rampart.

The room in front will change to the final room in the Domain. Ignore the puzzles first—you'll find a hole on the ground.

We're almost done! The last two Chests can be found while completing the final puzzle.

If you forget to loot any of the Chests in the Domain, you can still go back after completing Part 3 of the Domain. Interact with the bonsai on Kazuha's island and choose Misty Hills, Foggy Vales, then check the Phantasmal Tales section and enter your preferred Mirage.

Other As the Courtyard in Spring Once Appeared guides