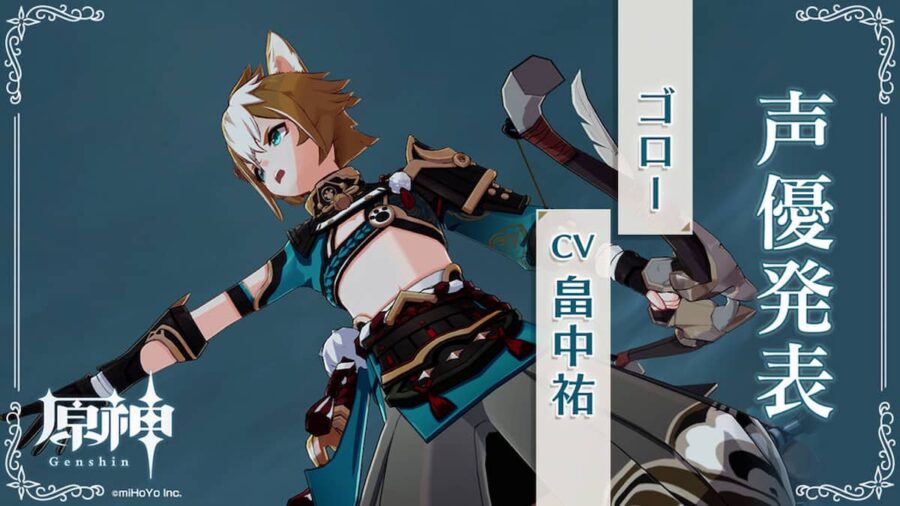 Don't be fooled by his fluffy ears and tail—as the resistance's trusted general, Gorou is someone who everyone relies on, especially in the most critical moments in the heat of battle. His unparalleled fighting intuition and uninhibited personality have earned the trust of the likes of Kaedehara Kazuha and Sangonomiya Kokomi.

Gorou is Genshin Impact's first four-star Geo Bow user, expected to release alongside Aragaki Itto in Patch 2.3, where players can summon for him through the Limited Banner.

Note: As Gorou's skills, talents, and playstyle have only been revealed in leaks, his best build may change in the future.

For more information on Gorou check out our Gorou Wiki page!

Gorou's kit revolves around his capabilities as an off-field Support, especially for other Geo characters. Within the game, off-field Supports are extremely valuable due to their ability to swap in, cast skills, and swap out to maximize your Main DPS's on-field time. Gorou's Normal and Charged attacks are standard among Bow users, allowing him to deal Physical and Geo Damage. Meanwhile, his Plunge Attack casts a rain of arrows, inflicting AoE Geo Damage upon enemies.

Gorou's main off-field tactic lies in his Elemental Skill, which drops a General's War-Banner and creates a Geo field within its vicinity. It grants a Defense bonus with one Geo party member, increases resistance to Interruption with two Geo party members, and grants a Geo Damage Bonus with three Geo party members. At the moment, it's unclear if Gorou counts as one member.

It's important to know that Gorou's Elemental Burst costs 80 Energy, which means that he can benefit from a weapon with an Energy Recharge substat.

The Elegy for the End is a great five-star Bow option that increases both Energy Recharge and Elemental Mastery. Meanwhile, the four-star Favonius Warbow is also a wonderful option for a full Support build, as it offers a higher Energy Recharge substat (61.3% vs Elegy for the End's 55.1%) and generates Elemental Particles through Crit hits. Players can obtain the former when it returns through the Limited Weapon Banner, while the latter is available in all Banners.

While the Sacrificial Bow is a four-star Energy Recharge weapon, it's not recommended for Gorou as his Elemental Skill, which has a 100 percent uptime, doesn't benefit from its cooldown reset.

Related: Who is Gorou in Genshin Impact?

Noblesse Oblige is a staple Artifact set for full Support builds, and Gorou can certainly rock this set, which you can pre-farm from the Clear Pool and Mountain Cavern Domain in Liyue.

Alternatively, Gorou may also benefit from two pieces of the new Artifact set, the Husk of Opulent Dreams, once it comes out in Patch 2.3, as it gives +30% Defense. You can pair it with a 2-piece set of Noblesse Oblige or Archaic Petra (+15% Geo Damage).

As an off-field Support whose buffs increase based on the number of Geo characters in the party, Gorou excels in supporting Geo team comps. He's an especially good Support for the new five-star Geo Claymore user, Arataki Itto. Fill the team with Zhongli or Albedo (or both, if you're looking to create a full Geo team) to take advantage of their Burst DPS and Support capabilities.

If you're excited to have Gorou join your team, start farming for his Ascension materials with our handy guide on How to farm Sango Pearl in Genshin Impact.

How to complete Chise’s Stormstones Hidden Objective in Genshin Impact

Where to find Magical Crystal Chunk in Genshin Impact

How to complete Ipe’s Hidden Objective in Genshin Impact