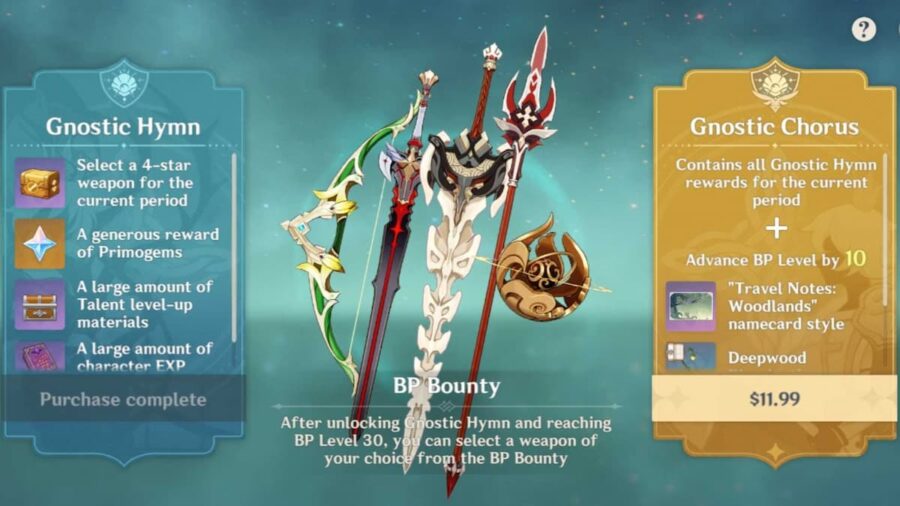 In Genshin Impact, there are plenty of ways to obtain weapons that pack a punch without using your wishes on the weapon banner. Though it costs money, the Battle Pass will give you your choice of a powerful four-star weapon in exchange for easy tasks that you're likely to complete anyway. If you spend money, having a guaranteed positive outcome isn't a bad way to go. Here are our picks for the best value for your choice.

These weapons can potentially boost your account significantly due to their focus on increasing CRIT rate and damage. Some are better than others, so think of this list as going from good to best.

Though it has its perks, The Black Sword is held back significantly by its weapon skill, Justice. Not many DPS sword users focus on normal or charged attacks, other than Keqing, who has a better option in the four-star Lion's Roar. Passive healing is a nice bonus, but healing isn't as valuable as DPS in the game. It's good, but there are better options you could pick first.

The Viridescent Hunt is a great bow, the problem is there's just not a great character to pair it with. Most DPS bow users would be able to use it but have much better options in other five-star weapons, such as Ganyu in Amos' Bow or Venti in the Skyward Harp. Even leaving the five-star options out of the equation, The Stringless outshines The Viridescent Hunt as a powerful weapon by being somewhat readily available via passively pulling it in the gacha. If you choose this weapon, use it on a character who would appreciate passive crowd control, such as Tighnari.

Related: How to Get Primogems Fast in Genshin Impact

The Solar Pearl was limited for the longest time by its weapon category. In the early days of the game, most catalyst users were not designed to be solely focused on DPS, other than Ningguang and Klee, who unfortunately were plagued with "clunky" animations. Its value increased with additions to the game, such as Yanfei and Shikanoin Heizou, whose animations feel a bit smoother. This is a good replacement if you've been missing out on Widsith or Lost Prayer to the Sacred Winds.

Deathmatch stands out due to its attack and CRIT rate scheme. While it has a lower Base attack than other weapons in this group, the nearly 10% additional CRIT rate makes up for it. Polearm users rely on attacking fast and scoring those CRIT hits often. It's a great option for Xiao, Rosaria, or a DPS Zhongli if you don't have something better, like the Primordial Jade Winged Spear.

Serpent Spine stands out amongst the crowd due to its category. So many claymore users are geared toward damage: Diluc, Eula, Itto, Beidou, and Razor. This weapon has some caveats, but the risk is more than worth the reward. Characters wielding the Serpent Spine will deal more damage the longer they are on the field but will also take more damage. You can easily mitigate the risk at higher refinement levels or by having a strong shielder on your team.