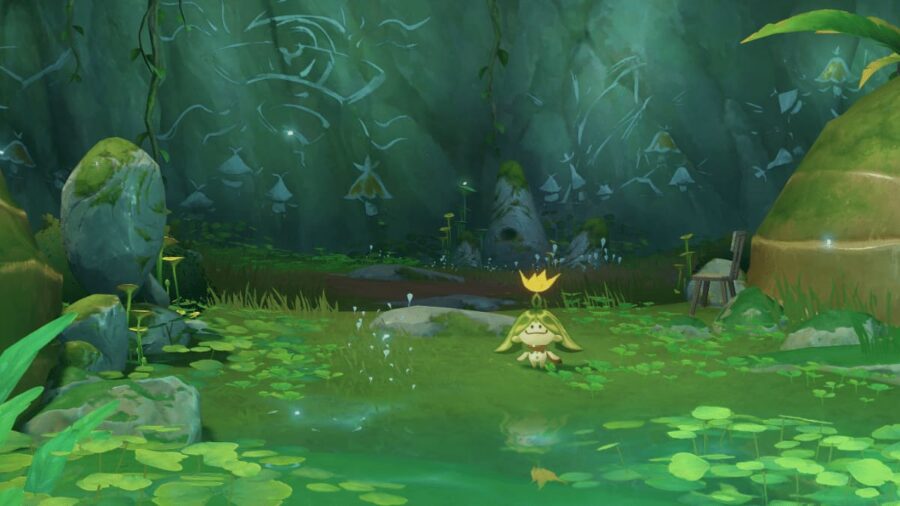 For the Children of the Past is the second quest in Aranyaka: Part III - Nursery of Lost Dreams, where Arama takes you into the forgotten land of Old Vanarana in hopes of getting rid of the source of Marana once and for all.

To unlock this World Quest, you must complete the Aranyaka World Questline up to For Fruits, Seeds, and Trees, where you visit the Ashvattha Tree's dream. After this segment, you will automatically initiate For the Children of the Past.

You'll need to follow your friend Arama for most of this quest. As you progress, you'll encounter a few Teleport Waypoints, activate them to make it easier to get around if you decide to leave halfway through. Additionally, prepare a strong battle-ready team, as there are tough enemies along the way.

Once you're within the vicinity of Old Vanarana, Arama will ask you to search for Inscriptions of Remembrance. Simply follow Arama and interact with the glowing Investigate spots in front of runes.

Go to the seal with Arama

After collecting all the Inscriptions of Remembrance, you must follow Arama to the seal. Glide down the entrance, but don't do a Plunge Attack. Instead, glide toward the little mushroom platforms to carefully follow Arama downward.

You need to keep following Arama further into Old Vanarana. Since the Withering is strong, activate the Candles of Life to heal you from Decay.

Try to destroy the Tumor of the Withering

This Withering Zone is slightly different from the prior ones as it doesn't contain any Branches. All you need to do is defeat the Ruin Grader, then approach the Tumor of the Withering to prompt a cutscene where Arama destroys it for you.

Try to lift the seal

There are seven seals around the area, three hidden behind the blocked path. While doing this segment, make sure to activate all Cradles of Life and pay attention to the Decay meter below, as the effects of the Withering are strong.

You need to apply Pyro onto the seals to prompt their HP bar to decrease quickly over time, eventually deactivating them. The image above illustrates that a deactivated seal will no longer glow green. Start by destroying four seals near Ruin Graders around the desert area.

Once you've broken the first four seals, head slightly northeast of the center of the quest area, where you'll find a Claustroflora. Equip the Vintage Lyre and play the Rhythm of the Beastly Trail (do > so > la > mi > do on the third line) to unblock the path in front of it, allowing you to push forward.

You'll immediately spot the fifth seal. Deactivate it with Pyro and follow the path forward, where you will find the sixth seal. After deactivating it, play the Rhythm of the Sprout (do > so > so > la > ti on the third line) in front of the Sprouting Branch to fill it with Healthy Dendrograna. Then summon Healthy Dendrograna and shoot at the floating projectiles (four in total) in order of appearance to open up a path forward.

Deactivate the seventh seal using Pyro, then play the Rhythm of the Beastly Trail (do > so > la > mi > do on the third line) in front of the nearby Claustroflower to unblock the path, which will lead you back to the desert area.

Look for a way down

After speaking with Arama, you need to defeat the Ruin Grader. Prepare a strong team and activate the Candle of Life to prevent Decay from stacking. After defeating the Ruin Grader, its HP will fill up, and you must defeat it again. The Ruin Grader will keep reviving, and the Cradle of Life will eventually get sealed. You must sustain the team by keeping the Decay meter at bay until Arama steps in to help.

Glide down the new entrance and interact with all the glowing Investigate spots to prompt dialogue with Arama and Aramuhukunda. Follow the quest marker to the deepest part of the cave to complete the World Quest.

Check out our Genshin Impact The Price hidden World Quest guide to complete other quests around Sumeru.