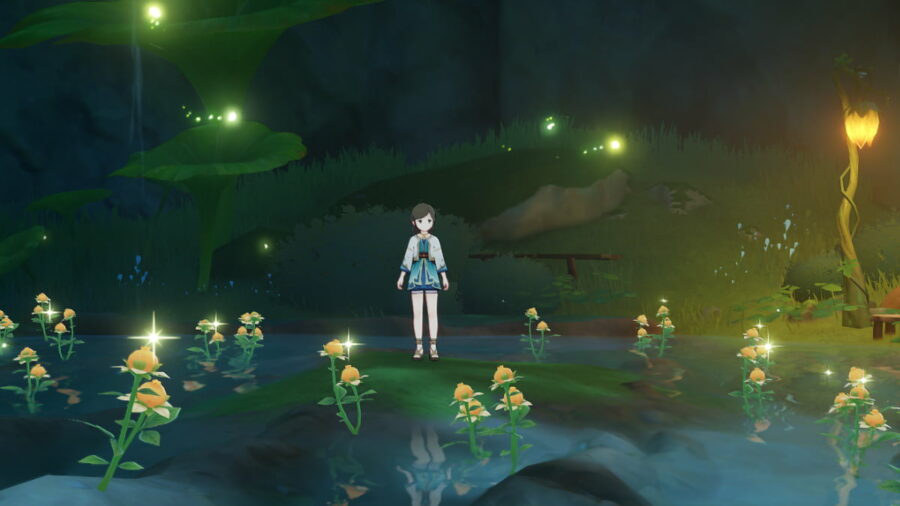 Giving Flowers is the sequel to the Varuna Gatha World Questline and is the last requirement to complete Part III of the Aranyaka book, which you can find in your Quest Item Inventory. In this World Quest, you meet a rebellious child named Varsha, who ran away from Gandharva Ville in hopes of living an independent life tending to flowers.

To unlock Giving Flowers, you need to complete the entire Varuna Gatha World Questline, as well as the following objectives:

After completing the prerequisites, switch to the real Vanarana and return to Aranakula's garden. You can get there by heading to the area circled in the image above to find a cave, then turning right at the intersection. Once inside, Paimon will exclaim that there is a ton of Sweet Flowers.

See the image above for what the back of the house looks like. You need to jump inside the cave and follow the path until you find a Withering Zone. Be careful, as this area is home to plenty of Rifthounds, so you might want a healer in your team. Get rid of the Withering Zone to get a Precious Chest reward and prompt a Claustroflora to spawn in front of the Auspicious Branch.

Equip the Vintage Lyre and play the Rhythm of the Beastly Trail (do > so > la > mi > do on the third line) in front of the Claustroflora to get rid of the boulder blocking the path, allowing you to explore further into the cave. Follow the path forward to find an NPC named ???. Approach her to prompt dialogue.

After speaking with ???, who introduces herself as Vasha, go to Aranakula's garden in real Vanarana. Speak with Varsha again to complete the World Quest. You'll unlock the Wonders of the World Achievement called Eternal Sustenance, and the Varuna Gatha section of the Aranyaka book will finally be complete.

Check out our Genshin Impact Until Vana is Healed World Quest guide to complete another Aranyaka sequel.