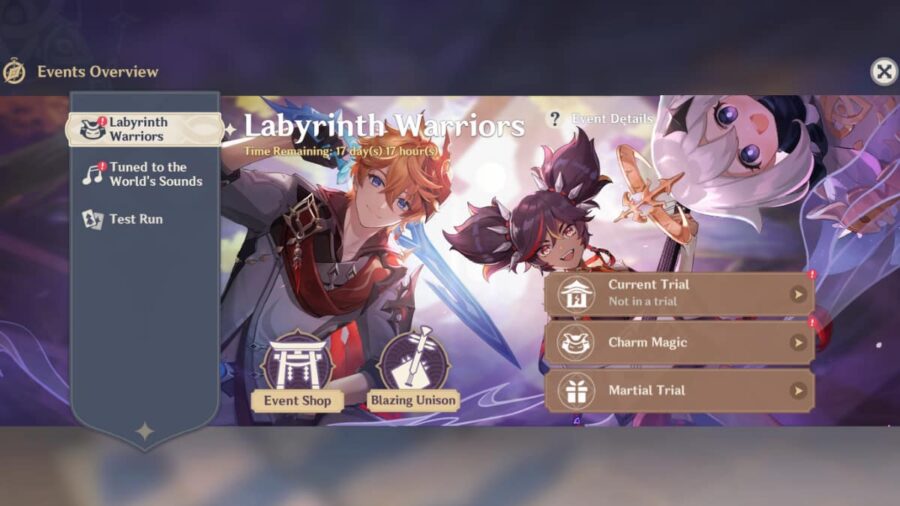 Inazuma is roaring with mysteries, and the Labyrinth Warriors event uncovers more secrets hidden amid the nation of Eternity. The event is a 17-day affair that runs from Oct. 21, 2021, to Nov. 15, 2021, and is open to players who have completed the quest Wishes (Chapter II: Act III—Omnipresence Over Mortals).

This multi-level event features a Domain with new mechanics. Participants who successfully beat each Trial can obtain Aged Tokens, which can be used to purchase Crown of Insight, Ascension materials, Talent Level Up materials, Primogems, Hero's Wits, Mora, and Mystic Enhancement Ores from the Event Shop. You can also obtain milestone rewards from the Martial Trial.

Don't forget to complete the event questline and save 4,000 Aged Tokens to exchange for Liyue's next rock music sensation, Xinyan.

Upon logging in, you'll receive a new Event Quest called A Tricky Situation. Approach Katheryne from the Adventurer's Guild to start the quest. She'll give you the Commission to help a Liyue musician secure a travel permit.

Head over to the Tenryou Commission where you meet Xinyan, who got herself in trouble after a series of events led her to hold a temporary travel permit—one that's about to expire. With the risk of deportation on the line, help Xinyan by using your influence in Inazuma to convince the Tenryou Commission to expedite her permit.

After speaking with the guard, enter the Tenryou Commission courtyard, where you encounter Kujou Sara and strike a deal. She tells you about a nameless Domain that popped up in Araumi—and you head to the area near the Grand Narukami Shrine to investigate. Sara eventually leaves the Domain investigation to you.

Defeat the monsters near the Domain and check out the piece of paper on the ground, which you later find out is a Shikigami named Shiki Taishou. Xinyan plays some music in an attempt to reach its heart, prompting Shiki Taishou to remember snippets of his memory and his ability to support others in battle with Charms.

Once you're ready, enter the Domain, where you'll meet an old friend and investigate the area together.

Related: How to find Katheryne in Inazuma

The Domain features five Trials that will gradually open within the first week of the Event. All players must start with The Ominous Demesne, which the Event Quest will lead you toward.

Upon clicking Proceed to Trial, you need to set up a Combat, Support, and Carry lineup.

The Combat party will be the main team you control, while the Support party consists of characters that you can switch into inside the Trial. Keep in mind that you can only switch in certain areas of the map and with limited frequency, so bring in a diverse Combat team to beat enemies of various Elements.

Meanwhile, the Carry section allows you to choose three out of nine existing Shikifuda. These grant various buffs that you can activate inside the Trial three times each.

There are various challenge interactions inside each Trial. The Trial provides stage details which you can access with the U key on PC, L1 + Down Arrow for PlayStation, and click the Special Environment button on the upper left of the screen for Mobile.

It will prompt a menu containing the Map Details, Charms Obtained, Cursed Seals, and Trial Rewards.

The first mechanic is the Arrayed and Ferocious Emplacements, which summon monsters upon activating. Completing a challenge will grant you a choice of one of three Charms. The Ferocious Emplacement allows you to choose between Serious and Dire modes, which change the difficulty of the battle. While more difficult, choosing Dire will increase your chances of drawing better Charms.

The second is the Charm Emplacement, which simply allows you to draw a Charm upon interacting. If you dislike the lineup of Charms presented to you, use 120 Battered Shikifuda, which you obtain by clearing challenges, to redraw the Charms.

The third mechanic is the Curative Emplacement, which allows you to heal your entire party or switch up your team. You can choose from the characters you assigned in your Support party setup.

Apart from these three, you'll also find areas in the Map Details marked with a Chest, which indicates that you can find some treasures in the area. As you go along the Trial, you'll encounter floating buffs that could increase your Movement Speed and Attack. You'll also find Investigate spots, which you should interact with for a chance to obtain Damaged Replicas.

Finally, the Decisive Encampment, marked by a skull at the end of the Map Details, signifies the boss battle for that Level. Each Trial can have multiple Levels, and you need to complete all of them to receive rewards.

The Labyrinth Warriors also introduces a new Charm Magic mechanic, which allows you to enjoy various Character and Shikifuda buffs. You can obtain these from the Arrayed, Ferocious, and Charm Emplacements.

You can obtain the same buffs throughout the Trials, so collect more to make it easier to clear challenges. You can also Enhance Charms through the Charm Magic menu on the Event Page. Each Enhancement costs a varying number of Damaged Replicas, which you can find through Investigate spots and Emplacement challenges.

Of course, the event isn't a challenge without a few hiccups along the way. You may randomly encounter Cursed Seals within hidden Cursed Traps as you explore each Trial Level. These inflict debuffs or unwanted effects that could hinder the ease of exploration.

Don't forget to check in every few days to unlock the rest of the Trials and get more rewards!

There's another event going on in conjunction with Labyrinth Warriors. Check out our Genshin Impact Tuned to the World’s Sounds Event Guide to learn more about it!

Where to buy Recipes in Genshin Impact