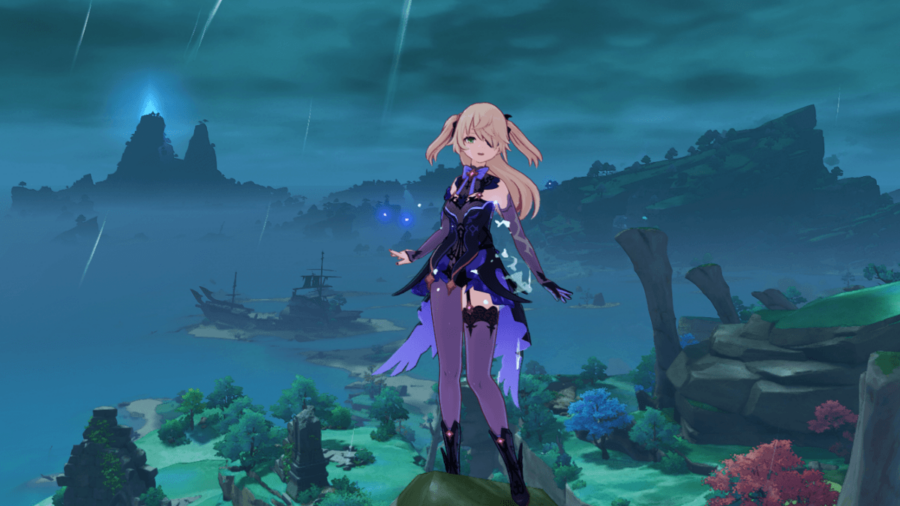 After ending the lightning storms in Fort Fujitou and Serpent's Head, the next step in the Orobashi's Legacy quest series is to fix the ward at Jakotsu Mine.

Solving the Jakotsu Mine device puzzle unlocks access to the ward, from which you can use your Elemental Sight to track down the Rock Pillar Warding Stone and the Rock Pillar Pearl.

Start at the Sacred Stone Mound (#1) on the topmost cliff, south of the mine. Adjust #1's orientation twice.

Head over to device #2 and adjust its elevation once.

Glide down and ignore the first floating device. Go past it instead to #3, on the wooden bridge with the two boxes. Adjust #3's orientation three times.

Drop down to ground level, then head west and climb up the spiral ledge. You'll pass a floating device; ignore it, and keep climbing until you come across the device (#4) on the wooden platform. Adjust #4's orientation three times and elevation once.

From this point, turn north and go to device #5, which is on another wooden platform with one box. Adjust both orientation and elevation once.

Attack the Sacred Stone Mound (#1) to activate the devices and lift the barrier dome. Now you can access the ward at the bottom.

How to get the Rock Pillar Pearl

Facing the ward, head to the right and go through the cavern. Use your Elemental Sight and follow the purple lights. The Rock Pillar Pearl is inside a barrier, so summon the nearby Electrogram to pass through it. Careful, as you'll be instantly ambushed by three Abyss mages.

After defeating the enemies, climb up one of the surrounding cliffs and glide over to collect the Rock Pillar Pearl.

How to get the Rock Pillar Warding Stone

If you've already completed the Genshin Impact world quest Gazing Three Thousand Miles away, you probably have the Rock Pillar Warding Stone in your inventory. If you haven't, head left from the ward and use your Elemental Sight to follow the purple lights into a cave.

This cave features a Elemental Monument puzzle which rewards a chest, but it is not quest-necessary (just hit all of the monuments in the room).

Summon an Electrogram inside the cave and glide all the way up using the Thunder Spheres. They will transport you to a ledge with a barrier. Summon the Electrogram here to pass through and retrieve the Rock Pillar Warding Stone.