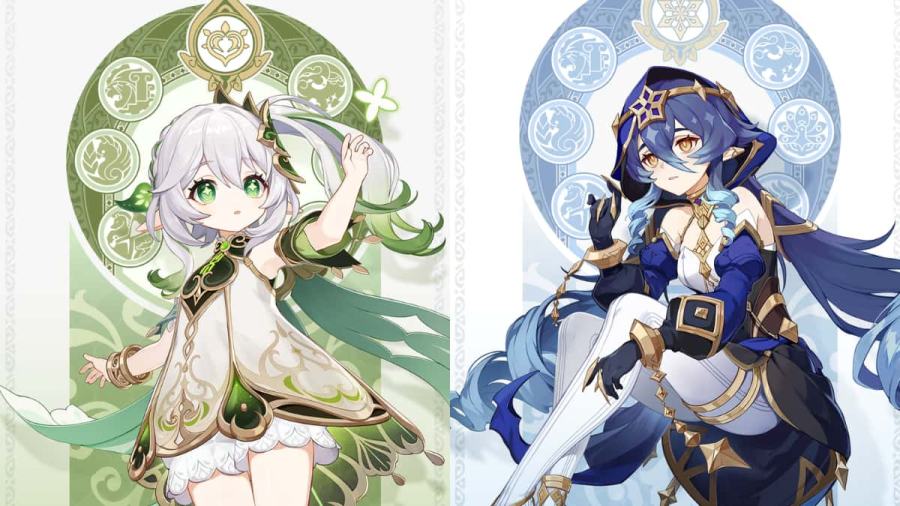 Amid the excitement over the Version 3.1 update, which will celebrate Sumeru's desert expansion and Genshin Impact's second anniversary, HoYoverse dropped official artwork introducing two more upcoming characters. Nahida, also known as Lesser Lord Kusanali, and Layla are expected to release in Version 3.2, five weeks after the prior update.

Being the Dendro Archon, Nahida is expected to be a five-star Dendro character. Leakers allege that she will be a catalyst user with an Elemental Burst similar to that of the Dendro Traveler. On the official Facebook post, Nahida was introduced by Chief Justice Neuvillette of Fontaine, a character who has yet to appear in the game. Some players believe she may be the Hydro Archon, given her title as the Chief Justice, but we can't confirm this theory.

Meanwhile, Layla was introduced as a Rtawahist student of the Akademiya whose studies are aligned with Theoretical Astrology. The always-tired but always-determined Layla is said to suffer from a severe lack of sleep, yet constantly proves her resilience to never fall behind her teacher's high expectations.

Players quickly highlighted a charming similarity between the two upcoming characters: their elf-like ears. Genshin Impact's lore has said little about the existence of other races, but they have been confirmed to exist, from Kujou Sara's Tengu heritage to Tighnari's ancestral roots that connect him to the Valuka Shuna, and more.

While the term "elf" is not universally used across Genshin Impact's translations, the famous adventurer Alice is known to belong to a long-living race with elf-like ears, a trait passed down to her daughter, Klee. Besides Klee, no other Genshin character has shown the same elf-like characteristic, hence why Nahida and Layla stand out for their possible connection to the aforementioned race. Since Sumeru is the first region to showcase characters unrelated to Alice with elf-like ears, it's possible for Genshin Impact to finally reveal more about the great adventurer or the race she belongs to—though it's unclear whether HoYoverse will choose to elaborate in the upcoming Story Quests.

Check out our Genshin Impact GENSHIN CONCERT 2022 web event guide – win Primogems & merch to get free Primogems in preparation for the upcoming update.