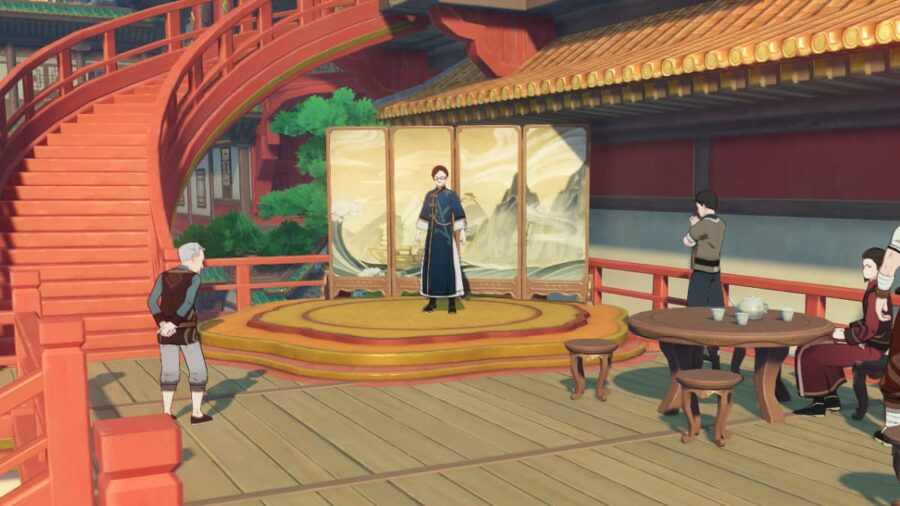 On the Stage, Behind the Stage is a Liyue World Quest that automatically appears in the quest menu. Following it will bring you to the Heyu Tea House, which is in dire need of a stage replacement. Completing this World Quest will reward you with a Pear Orchard Stage: Yun-Han Style Furnishing Blueprint, Primogems, and other resources.

Upon initiating the quest, follow the quest marker to the Heyu Tea House in Liyue Harbor. Tea Master Liu Su will send you to Qingce Village to find a carpenter. Master Lu is not available, so apprentice Dayu accepts the commission. He will ask you to collect three Pine Wood and one Red Dye.

Pine Wood can be obtained by hitting trees in Dragonspine and bonsai in Inazuma City and Ritou. Meanwhile, Red Dye can be produced through Tubby's Create Furnishing menu. After collecting the materials, change the in-game time to 18:00 to 21:00 the next day, then follow the quest marker to the Heyu Tea House. Complete dialogues with various characters, until you're asked to collect wooden planks.

Related: How to get Red, Blue, and Yellow Dye in Genshin Impact

The wooden planks can be found beside the Ministry of Civil Affairs. Interact with the spot the glowing arrow is pointing at to collect the planks and send them back to the Heyu Tea House, completing the World Quest.

Check out our guide on How to complete the Chamber of Twisted Cranes in the Genshin Impact Perilous Trail event to navigate the Domain filled with Adeptus Bridges.

How to complete the On the Stage, Behind the Stage World Quest in Genshin Impact