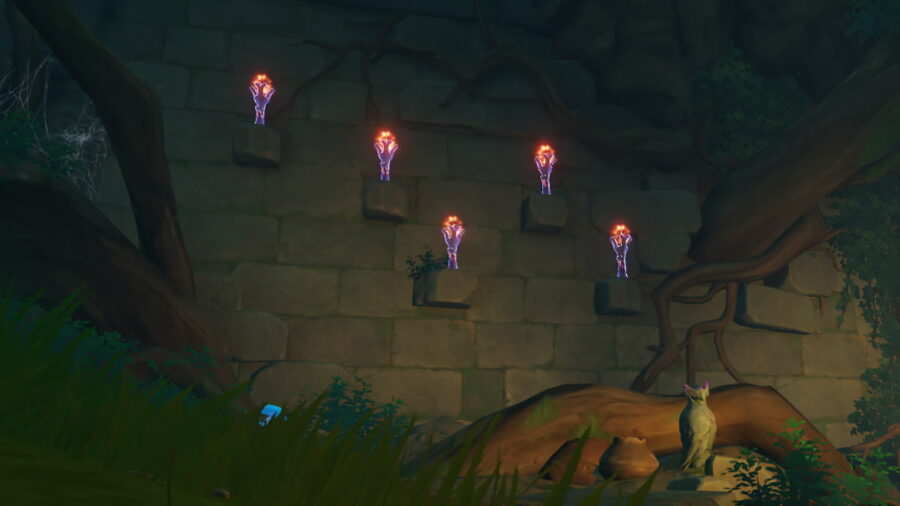 Tsurumi Island is one of Genshin Impact's most mysterious locations, housing the illusory remnants of an ancient civilization. Beneath one of its mountains, Shirikoro Peak, is an elaborate underground ruin filled with puzzles, including three Torch puzzles that can be solved with the help of the murals on the cave walls.

One of the Torch puzzles will only appear after using the Peculiar Pinion Gadget. To locate it, head to the area marked in the image below. Keep in mind that the area is located underground, so head to Shirikoro Peak, jump down, and follow the path leading to the marked location.

Once you reach the area, use the Peculiar Pinion Gadget on the Thunderbird Statue to reveal the Torch puzzle on the wall.

Related: How to complete The Saga of Mr. Forgetful World Quest in Genshin Impact

To solve the puzzle, you need to light up the Torches in the order prescribed by the nearby mural. The mural features the motifs of three stars, indicating the positions of the three Torches that need to be lit up. You can use any character that can apply Pyro to light them up, but we highly recommend using an archer like Amber or Yoimiya to aim accurately.

Reference the image above for the Torches you need to light up in the exact order they're numerically labeled. While there are five Torches, you only need to apply Pyro onto three, while the last two will automatically light up at the end. Completing this puzzle will reward you with an Exquisite Chest and will count toward the Hidden Achievement called Guessing Game.

Check out our guide on How to solve the Star-Shaped Gem puzzle in Tsurumi Island | Genshin Impact, another puzzle required for the Guessing Game Achievement.